In October 2019, the U.S. Food and Drug Administration approved Trikafta, a drug able to treat patients with the most common cystic fibrosis (CF) mutation. Approved for patients 12 and over, the drug means that more than 90% of people with CF could eventually have an effective treatment for the underlying cause of their disease.

Augusta University’s Cystic Fibrosis Center was one of the clinical trial sites and is now administering the drug to CF patients.

Cystic fibrosis is a progressive genetic disease that results in the formation of thick mucus that builds up in the lungs, digestive tract and elsewhere in the body. Typically diagnosed by age 2, there are currently 30,000 people in the United States with CF, with 1,000 new cases diagnosed each year.
In the 1950s, CF patients seldom lived to reach elementary school. Now, the average life expectancy is in the 40 years. The addition of Trikafta, a combination of three drugs that targets the defective protein caused by the mutations in the cystic fibrosis transmembrane conductance regulator (CFTR) gene, is expected to have a dramatic impact in increasing both life expectancy and quality of life.

How does the drug work?

The drug is a combination of three drugs (elexacaftor, tezacaftor and ivacaftor). Tezacaftor and elexacaftor are “correctors.” These drugs help the CFTR (cystic fibrosis transmembrane receptor) protein form properly so that it can be carried up to the surface of the cell and remain there longer. The drug ivacaftor functions as a “potentiator,” and this drug acts to hold the gate of the protein open longer, so that chloride can flow across the cell. The three drugs work in combination to restore the function of the CFTR protein. The drug is approved for individuals 12 years and above with one copy of F508del, which is the most common mutation in cystic fibrosis.

Has there ever been a drug like this before?

The first CFTR modulator approved was ivacaftor, which was approved in 2012. Only 7% of individuals qualify for this drug, as it is approved for individuals with specific mutations (G551D, R117H and other gating mutations). Ivacaftor/lumacaftor and ivacaftor/tezacaftor were the next group of modulators approved, but are only approved for individuals with 2 copies of F508del. We have had drugs come out that have slowed the progression of the disease, but until the CFTR modulators, nothing that would increase forced expiratory volume in one second (FEV1), which is an established marker of cystic fibrosis lung disease progression. With the recent approval of Trikafta, 90% of patients now have a drug that works to correct the underlying defect of the disease.

How did Augusta University become part of the clinical trial?

We’re a part of the Therapeutics Development Network (TDN), which is the largest clinical trial network for cystic fibrosis research in the world. Selection to become a part of the TDN is a competitive application, and we have been one of the TDN centers since our acceptance in 2017. The TDN is primarily funded by the Cystic Fibrosis Foundation, and 92 accredited CF centers are a part of this network.

By being part of the network, we get earlier access to clinical trials. Our center expressed interest in participating in the study, and after assessing the capabilities of our center to be a successful site for this study, we were one of the sites selected by the sponsor to participate in this clinical trial. This particular trial was one of the most competitive trials for participation due to very exciting preliminary data on the potential impact of the drug for our patients with cystic fibrosis.

These trials are extremely competitive from an enrollment standpoint, with very quick enrollment deadlines. From the time you’re selected as a center, you have to get things through the institution for approval very quickly, so you can get the study approved at an institutional level and patients can be enrolled.

There was extremely high demand because of the anticipated impact of this drug.

In the first part of the trial, the individuals with one copy of F508del were randomized to get either placebo or the drug. At the end of the trial (24 weeks), all patients rolled over to open label, which meant everybody then received the drug. In the other part of the trial, individuals with two copies of F508del received ivacaftor/tezacaftor or the triple combination drug (elexacaftor/tezacaftor/ivacaftor) for 24 weeks. There was a 14.3% increase in lung function, 63% reduction in pulmonary exacerbations, improved symptoms, and on average about 6 pound weight gain for 130 pound individuals in the group that had one copy of F508del.

Why such a small number of participants?

There were 115 sites in 13 countries that were involved in this clinical trial, and most centers were only allotted two to three patient slots. This enabled more individuals with cystic fibrosis across the country and world to take part in the trial, and by having more sites with very competitive enrollment, recruitment occurred very quickly.

What were some of the challenges?

I think one of the unique things about this was just how fast things had to be up and running. They wanted enrollment to happen quickly, so we had to have all the infrastructure in place to be successful.

Another challenge was that we had many people who were interested in the study, but we couldn’t choose everyone. We had one pediatric and one adult patient, and we have a total of almost 200 patients in our center. However, we have a significant number of patients now who have either started the drug or are in the process for approval to begin the drug.

What do you find most exciting about the drug?

What’s going to happen with the kids with cystic fibrosis.

It’s certainly exciting for the patients who are sick, because lung function improved (increase in FEV1), and there was a decrease in pulmonary exacerbations or flares of their CF, which is when they get admitted to the hospital and need IV antibiotics. But what’s even more exciting is what’s going to happen for the kids who don’t have significant lung disease or other complications yet, or if they do, it’s less severe. The hope is that we can avoid or significantly delay the complications of cystic fibrosis, such as diabetes, pancreatitis, bronchiectasis and the number of individuals needing lung transplantation due to progression of the disease.

The drug is now approved for individuals with one copy of F508del age 12 years old and over, so the next thing they’ll be looking at is 6-to 12-year- olds, and then they’ll look at the under-6 age.

Now, with the approval of Trikafta, we’re taking part in another study that’s going to be looking at the impact of this drug longer term on the various organ systems.

On a personal level, what does it feel like to play a part in the development of this drug?

It’s probably been the most exciting part of my job. Obviously, I love all aspects of my job, but to see the tears of joy from a parent who was told her daughter might not survive long enough to graduate high school or get married … that’s why we are here — to try to improve the lives of individuals with cystic fibrosis and allow them to be able to lead a more normal life like you and I.

To be born with a disease you had no control over is rough. There have been lots of tears shed. I’ve gone to a lot of funerals over the years of people who died too soon due to cystic fibrosis. But you always hope you can be a part of something like this to provide hope for such a previously devastating disease. 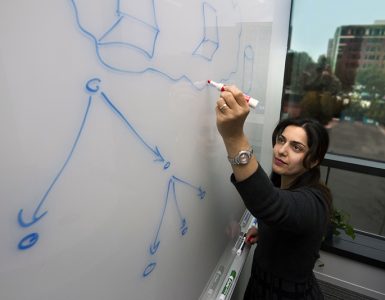 As society pushes the limits of technology, the battle between privacy and security is growing more intense. And the consequences are spilling out all over the headlines. In India, for example, widespread hysteria...