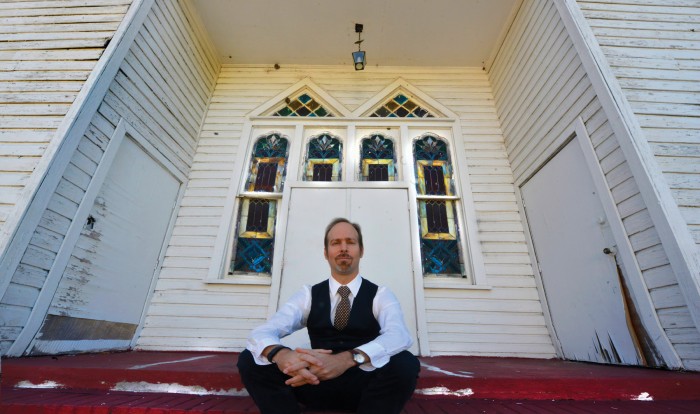 In the sweet by and by, we shall meet on that beautiful shore.
Oh Death, whoa death, won’t you spare me over ’til another year?

If your roots are in the rural South, chances are that your great-grandparents grew up singing one set of these lyrics or the other.

But which one? An Augusta University historian thinks he can make an educated guess about your heritage based on the answer.

“There’s a strong popular conception that the South is very religious; the phrase ‘Bible Belt’ comes to mind,” says Dr. John Hayes, an assistant professor of history who received a summer stipend from the National Endowment for the Humanities to pursue his research. “But historians of the South typically haven’t known how to deal with religion, so there are lots of gaps in our understanding of exactly what that means.”

Hayes recently completed a monograph – “Hard, Hard Religion: The Other World of the Poor South” – detailing his years of research on the topic in an attempt to close some of those gaps. What he has found is that the Bible Belt traditionally has meant very different things to different groups of people, based largely on socioeconomic status.

“I grew really interested in the topic reading Flannery O’Connor,” says Hayes, noting that the Southern Gothic writer from Milledgeville, Georgia, came much closer than many historians to exploring the role of religion in the lives of Southerners, particularly poor rural Southerners. “I thought, ‘What if I could use O’Connor’s fiction as a window into this unique aspect of the South?’ I wanted to explore the real-world implications.”

He found that in the social, political and economic upheaval in the wake of Reconstruction, most Southerners – both black and white – found solace in the Christian religion that had sustained their forebears for generations. But at that particular juncture in history, Southern society splintered into two distinct cultures. The Southerners of that era who managed to cling to the middle class, or even to maintain or build affluence, perpetuated familiar traditions of mainstream Protestantism. That tradition, embodied to this day by the stately, steeple-topped Baptist or Methodist churches ubiquitous to Southern towns, was where the throngs would rhapsodize about the reward of a godly life: heaven: “In the sweet by and by, we shall meet on that beautiful shore.”

But in a parallel universe that was only a stone’s throw away, many of their brethren were living a very different kind of experience – an experience reflected in their culture.
Many newly liberated slaves and grindingly impoverished whites – sharecroppers, coal miners, millworkers – found themselves trying to eke out a subsistence in a society seemingly impervious and indifferent to their struggles. “They were given the message that they had no value, that their lives didn’t matter,” Hayes says.

“There’s already a wide body of literature devoted to white christianity and black christianity. This is a third category. I wanted to understand the significance.”

They begged to differ. They had precious few resources at hand to give voice to their suffering, but they created songs, stories and other means of articulating their experience. This happened in homes and communal gathering spots, including of course churches. Erecting modest, nondescript folk-religion structures, they gathered not only to share values, but to assert their worth and humanity. As was true of mainstream churches at the time, Hayes notes, they largely segregated by race. But the services of the rural poor, both black and white, tended to have more in common with each other’s than the services unfolding in the gleaming, towering structures dominating town squares.

“There’s already a wide body of literature devoted to white Christianity and black Christianity,” Hayes says. “This is a third category. I wanted to understand the significance.”

The impoverished Southerners’ commonalities carried over into other areas of life as well, including politics. For instance, in the 1890s, a Georgia orator named Thomas E. Watson managed to briefly galvanize destitute blacks and whites by campaigning for the Populist Party, delivering the thundering message that their poverty was unacceptable.

“This was an underground religious culture,” Hayes says, “a cultural mindset that carried over into politics. It was a cultural response in the face of their denigration – their way of saying, ‘Yes, we do matter.’ It was a way for poor whites and blacks to find common ground and forge a fragile but real connection.”

Although the Bible was front and center in their services, as was true in other Christian churches, folk churches included liberal doses of mysticism and sacramental impulses, such as seeing religious significance in tangible objects, Hayes says. “Their services tended to have more of a passionate and emotive tone,” says Hayes.

“Hard, Hard Religion” challenges the scholarly consensus and popular conception that religious life in the South divides solely along the “color line.” It explores how in the society of the New South (1890-1940), poor blacks and poor whites crafted a folk religion that gave voice to sufferings and longings born in poverty. “Hard, Hard Religion” seeks to complicate the scholarship and offer a different portrait of the South by analyzing these interracial class dynamics.

The folk culture was primarily transmitted orally, by stories and songs, and the song lyrics were telling. Mainstream Protestants, Hayes says, generally expressed joy and optimism about death, a mere passageway to a glorious afterlife. But their hardscrabble brethren encouraged each other to find value in the corporeal world that was largely denied them through conventional means. They rejected pat and patronizing assurances from affluent neighbors that real-life privations were unworthy of rectification since they would translate into afterlife treasures.

“A very familiar maxim is Karl Marx’s claim that religion is the opiate of the masses,” Hayes says. “That’s the exact opposite of what I found.”

Instead of accepting their lot in life, folk Christians mobilized, offering mutual support and encouragement. “Their religion was very much of the real world,” Hayes says. “There was a strong sense of communal neighborliness.”

And the hymns they sang in church – songs popularized nationwide by the 2000 film, “O Brother, Where Art Thou?” – articulated their real-world struggles (“I Am A Man of Constant Sorrow” and “I Am Weary, Let Me Rest,” for instance) while valiantly resisting death or surrender. For instance, the popular folk religion song, “O Death,” intones, “O death . . . you run my life right out of soul.”

Predictably, more affluent Southerners tended to eschew folk culture. “If you do things that make it clear you’re a member of a certain class, the higher classes will distance themselves as much as possible,” Hayes says. “They saw the folk culture as primitive.”

Hayes is pleased that his monograph will add to the body of literature just as the last of folk worshippers are largely dying out. “There are still some elderly people who remember their parents carrying on folk traditions, but the culture began to unravel in the 1940s,” he says. “By then, the youth were moving away from it.”

He is gratified that many descendants of folk worshippers managed to escape poverty, the condition that created it in the first place, but thinks people have much to learn from those whose voices rose up in modest little churches that today are crumbling to the ground if they still stand at all.

“These people were trying to help each other and prevent social chaos,” Hayes says. “I was aware of the regional poverty that emerged from the Civil War, but I really didn’t understand the lives of the poor. My research gave me a great appreciation not only of their struggles, but of their aspirations.”