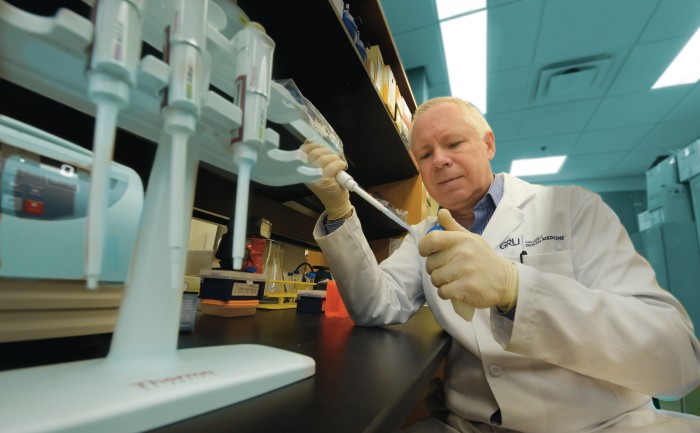 “We are treating a very complex being.”

That is the basis of what Dr. Andrew Yeudall tries to impart in the classroom – and it’s the one that informs every aspect of his research.

Yeudall, who joined The Dental College of Georgia in July as chairman of the Department of Oral Biology, researches a disease embodying the truism that the more one learns, the more he realizes how much more there is to learn.

But he revels in the challenge of chasing every lead, following every path, pursuing every theory as he tries to get a handle on one of the most vexing diseases known to man: cancer.

And he does so with a sense of urgency, knowing how much is at stake. His area of study – oral cancer – exacts a huge toll on those it affects. Oral cancer – cancer of the tongue, gums, palate and other tissues on or around the mouth – can be disfiguring, disabling and often deadly. “The prognosis depends on the site of the cancer – cancers of the lip or front of the mouth, for instance, are often diagnosed earlier and have a better prognosis – but many of these tumors are apparent only at the late stage, at which point the prognosis is a lot worse,” says Yeudall, who earned his dental degree and a PhD in molecular pathology from Glasgow University in his native Scotland.

“And even if you surgically remove these cancers,” he adds, “recurrent tumors or new tumors in different parts of the oral cavity are very common.”

Even worse, the cancers are becoming more, not less, common. “The average age of diagnosis used to be around 60, and it was seen mostly in males,” Yeudall says. “Now, it’s being detected a lot earlier – often around age 40 – and is now seen almost as often in women as in men.”

Faced with a stubborn overall five-year survival rate of only around 50 percent, Yeudall is tireless in finding ways to outsmart the cancer cells.

Armed with a four-year grant funded by the National Institute of Dental and Craniofacial Research, he has found that different cancer cells activate different biochemical pathways. “We’re finding that the cells grow in different ways,” he says, “so we are isolating cancer stem cells in the lab and analyzing their molecular properties.”

One year into the study, he and his colleagues have identified a number of intermediate signaling proteins that are elevated in cancer cells. “We’re using forms of targeted therapy to try to modulate their biochemical function, hopefully reducing the degree of malignancy in the cells,” says Yeudall. “The more we learn, the more possibilities there are and the more interesting it gets.”

The ultimate goal, he says, “is finding out how cancer stem cells work and how to kill them. Those cells tend to be resistant to treatment and are responsible in large part for cancer recurrence.”

He hopes his findings will eventually lead to treatments supplementing current modalities including surgery, chemotherapy and radiation. And in the meantime, he cautions the public to do everything possible to minimize their risk of oral cancer.

“The vast majority of oral cancers are lifestyle-related, and those types are less amenable to treatment,” he says, citing factors such as smoking, drinking alcohol and engaging in unprotected sex.

“There’s almost always some lifestyle factor involved, most commonly tobacco and alcohol, and often a combination of two or more,” he says. “And the more you drink and smoke, the higher your risk.”

He urges people to eschew unhealthy habits while eating a diet high in fresh fruits and vegetables. “Those foods provide lots of vitamins that can act as antioxidants to prevent cancer cell development.”

And although he’s just starting to familiarize himself with some related initiatives in prevention, Yeudall is intrigued by findings such those of his new colleague, Dr. Stephen Hsu, who has uncovered multiple antioxidant properties of green tea.

He is also eager to impart his love of discovery to his students. “I think students need to embrace science, not only to pass exams but to eventually bring into their clinical practice the understanding that they are treating a very complex being.”

He is gratified that his new university, which he came to from Virginia Commonwealth University, is so like-minded. “I was very impressed that The Dental College of Georgia has such widespread expertise in the basic biomedical sciences,” he says.

Yeudall is already recruiting new faculty, hoping to bolster both teaching and research in his department. He anticipates curricular changes as well, noting that science demands ongoing reevaluation. “I think we’re gearing up to meet the challenges of curricular changes school-wide,” he says.

But regardless of the specifics of the subject matter, Yeudall enjoys cultivating an ongoing love of learning in future dentists – an essential component of science, he says. And challenges notwithstanding, he embraces the love of learning essential to cancer research. The future, he says, is bright. “I’m always optimistic.”