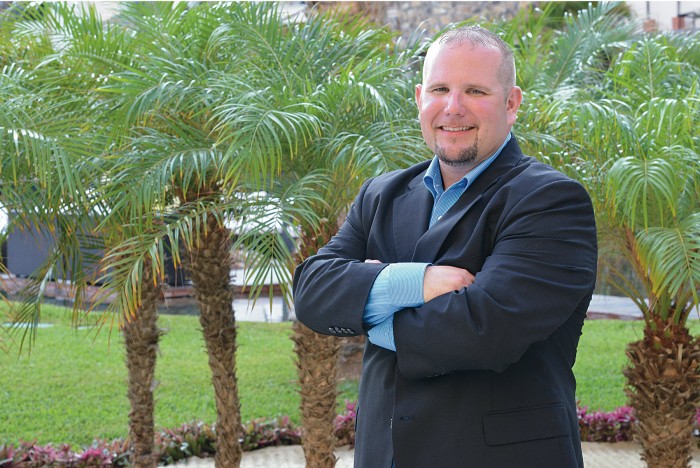 Editor’s note: This is the third in a series of Word of Mouth articles highlighting community-based dental rotation sites for seniors.

“I was embarrassed,” he recalls of his reaction when a horse, spooked by a sudden thunderstorm, bucked him off and trampled him in the middle of a pasture.

Frazier, who at age 14 was training horses for part-time income, realized only when trying to get back on his feet that it was no laughing matter. “I sat up and saw my leg all mangled,” he says. “That’s when I went into shock.”

The owner of the horse farm got to him quickly, but an ambulance was late in arriving. Frazier’s father, who had rushed to the scene as soon as he heard what happened, finally scooped his son in his arms and drove him to the hospital himself.

His shin was so shredded – stripped of skin, flesh, muscles, tendons and nerves – that the leg was almost beyond repair. But Frazier’s health care team was determined to do everything possible to save it. Frazier, a high-achieving kid from Bolingbroke, Georgia, who excelled at sports and outdoor activities, had his whole life ahead of him. The first of many surgeries soon followed. “I was in the hospital 28 days, and I missed my whole freshman year of high school,” says Frazier, noting he was homeschooled by his high school Spanish teacher during a grueling rehabilitation process.

Frazier’s outlook from the very beginning of his ordeal was remarkably sanguine. “Looking back, I can see how I picked myself up and dusted myself off,” he says.

He was eventually back on his feet literally as well as figuratively. His days of playing offense and defense in football were over, but Frazier stayed on the team as a kicker, going on to set several school records. He pushed himself to get back on track in other areas of his life as well . . . back to the golf course, back to his fishing hole, back to the classroom, back to his life.

And he never forgot the professionals who helped him do it.

“That’s when I got interested in health care,” he says.

It was when shadowing his father’s best friend, Dr. Philip Cawthon (’75), that his dream fully took shape. “I knew I wanted to work with my hands, and I realized that dentistry would give me the opportunity to help people, to change people’s lives, while still being able to raise a family and have a well-rounded life.”

After earning his undergraduate degree from the University of Georgia, he enrolled in dental school at the Medical College of Georgia (now Augusta University). He acknowledges those four years were among the toughest of his life – but also among the most fulfilling. “I met a lot of great friends in dental school, several of whom I still keep in touch with on a weekly or almost daily basis,” he says. “Dental school is very trying, and you need the support of friends going through it. It was tough, but I wouldn’t change it for anything.”

Once he had his degree, he was eager to get to work, not only to set his dream in motion but to pay down the debt that had financed his education. “I was the first male college graduate in my family,” he says, adding that student loans were an absolute necessity.

He worked for a year at a large practice in Warner Robins, Georgia. But his modest upbringing and rural roots soon led him to Vidalia, Georgia, where the Compassionate Care Dental Clinic, created specifically to treat underserved patients on a sliding-scale fee system, was just getting off the ground. 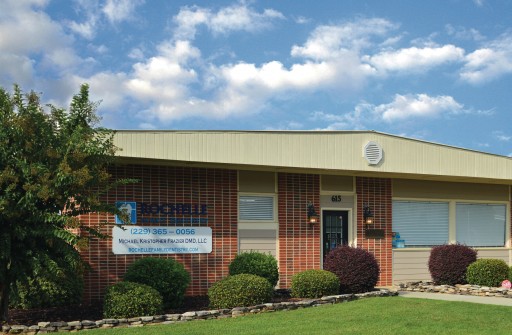 “I helped set up the clinic and get it off the ground,” Frazier says. “Growing up in a blue-collar family, the patients were the kinds of people I could relate to. I’d had a lot of experience treating underserved patients in rotations during dental school too, and I felt right at home. I grew up next to a dairy farm and worked on farms most of my childhood. I knew what it was like not to have a lot of money for health care bills.”

The natural next step was opening his own practice with the same philosophy. In 2011, he bought a practice in Rochelle, Georgia, a town of about 1,500 in the south-central part of the state, where Frazier treats thousands of low-income patients. “I’m the only dental provider in the county, and I feel like I need to be here,” he says. “They don’t have anybody else to go to.”

Not only does he enjoy the patients – humble, hard-working and hugely appreciative of their care – but he relishes the opportunity to continually stretch his abilities. “I do a little bit of everything – general dentistry, implants, sedation, hospital dentistry, pediatrics – and I’ve devoted a lot of time and education to learning new skills,” he says.

He is eternally grateful to The Dental College of Georgia for giving him a running start. “The dental school prepares you very well clinically and teaches you everything you need to know,” he says. “It was only after being in private practice that I could truly appreciate the education I received.”

His gratitude was a primary factor in deciding last year to welcome Dental College of Georgia students into his clinic for clinical rotations. Two at a time come on board for two-month rotations.

[su_pullquote align=”right”]“I’m the only dental provider in the county, and I feel like I need to be here.They don’t have anybody else to go to.” – Dr. Michael Frazier[/su_pullquote]

“The first time I worked with students was with the Georgia Baptist Ministry, where I am on the board of directors,” Frazier says. “The ministry offers free dental care throughout Georgia, all of it funded by donations, and I met students who wanted to participate.”

He enthusiastically put them to work and has enjoyed mentoring them – now in his clinic – ever since. “This rotation gives them a truly rural experience,” Frazier says. “It shows them you don’t have to move to Atlanta to be successful, and they realize how fulfilling it is to help people who might otherwise fall through the cracks.”

Dr. Grayson Griffis (’15), one of the first students to rotate through the clinic, concurs. “It’s a very well-run practice and a very nice facility,” he says. “He has six operatories; he’s busy but extremely efficient. I felt like I fit right in. I got to do procedures and use materials that made me stretch out of my comfort zone a little. That was certainly a point of growth for me. It gave me a lot more confidence. You learn a lot in school, but you get the real-world perspective on these rotations, so they’re really invaluable. I highly recommend Dr. Frazier’s rotation.”

Frazier agrees that the real-world element offers something that can never be taught in a classroom. “I give the students little pointers that I hope go a long way,” he says. “I think back to things that gave me trouble when I first started practicing, then give them advice that hopefully smooths the path for them.”

Griffis notes that he came to know Frazier not just as a mentor, but as a friend. “He was always willing to sit down and chat . . . to talk about dentistry or to talk about hunting and fishing. He’s a very down-to-earth guy.”

In fact, Frazier made such a strong impression that upon graduation, Griffis followed his path by signing on at Valdosta’s Compassionate Care Dental Clinic.

Frazier and his fiancée plan to marry in the spring, and his spare time is filled with sports and activities that belie his early brush with tragedy. “I play golf and enjoy exercising, and I even still ride horses occasionally,” he says. “I have occasional phantom pain in my leg, but it’s nothing an Advil can’t handle. I have the scars to remember my accident by, but nothing has held me back. You know what they say: ‘What doesn’t kill you makes you stronger.’”