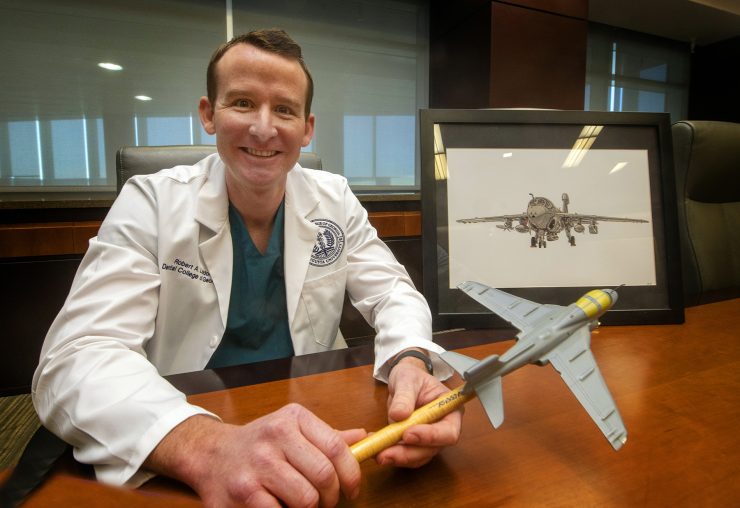 ROBERT LONDON WAS a college freshman utterly uncertain of his career goals when his brother’s graduation from the U.S. Marine Corps Boot Camp offered the shot of motivation he was looking for.

“I thought, holy cow, I’ve got to get my life together,” says Robert with a laugh.

After earning a business administration degree, he followed his brother into the Marine Corps, eager to capitalize on a dream that had been incubating since he saw Tom Cruise’s character, Maverick, compete for supremacy in the U.S. Navy Fighter Weapons School. “Top Gun was my entry into the rabbit hole,” Robert says. “I realized how exhilarating flying could be.”

Robert, now 34, completed Officer Candidate School in Quantico, Virginia, then moved on to Pensacola, Florida, for flight school. Upon graduation, he soon found life imitating art as he embarked on numerous life-or-death missions, seeing combat duty in Afghanistan, Iraq and Syria for a total of 240 combat hours, earning four air medals in the process.

“I flew an EA-6B Prowler, an electronic warfare jet, which flies around 550 knots per hour, the equivalent of 630 miles per hour. With a combat load, they go about 420,” he says, noting that the exhilaration exceeded his wildest expectations.

Robert accrued a slew of specialized training and accolades along the way, eventually serving as a weapons and tactics instructor and mission commander, among other honors reserved for the cream of the crop.

He retired from the Marines as a captain, then served in the reserves for six months before being accepted into the U.S. Navy’s prestigious Health Services Collegiate Program, which is funding his newest challenge: dental school.

“The marine in me is like, ‘Let’s test your level,’” says Robert, president of the Class of 2024, citing an enthusiasm that has been only slightly tempered by the rigors of his coursework.

“It’s definitely challenging. Dental school is a marathon, spending all day in classes and clinic, then studying at night. But I love it. The military definitely taught me to stay organized.”

He finds himself applying his perfectionist skills in unexpected ways. For instance, he has enlisted his classmates to spend a day deep- cleaning the DCG Simulation Lab, wet lab and practice lab. “I’m hoping to make it an annual event,” says Robert, who hopes that the dozens of people who use the labs daily will be motivated by the white-glove standards he honed in the Marines.

Dentist and a Mentor: Alumna Shares a Lifetime of Wisdom