The consensus was overwhelming: Connie Drisko could fill up a room like nobody else. The sentiment was shared over and over at her Sept. 5 memorial service in GRU’s Maxwell Theatre, and her spirit certainly filled up the room for the somber yet joyful occasion.

“Connie brought passion to her many professional endeavors, compassion to everyone she came in contact with, humor when it was needed most, and she did it all with style and grace like nobody else could,” said Provost Gretchen Caughman in eulogizing the woman who served as Dean of the College of Dental Medicine from 2003-12. She died June 22 of acute myelogenous leukemia, but the hundreds of mourners who filled the theater made clear that her legacy will live on for generations to come“I can’t help but think how much she would have loved to be here,” said her successor, Dean Carol A. Lefebvre, “doing her Energizer Bunny greetings and giving her famous hugs.” 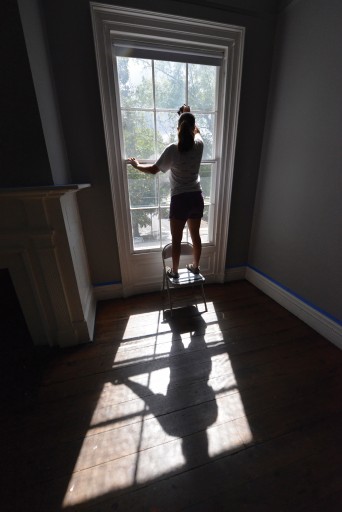 Lefebvre dubbed her the college’s “queen dean,” working tirelessly to optimize oral health in Georgia and nationwide while never taking herself too seriously. From pies in the face to tricycle races to dunking booths, she had a huge sense of fun, Lefebvre noted, quoting Drisko’s advice to “turn up the volume and make every day count.”

A Ball of Energy

Caughman, a member of the search committee that recruited Drisko to GRU, recalled that she was “a ball of energy at her interview. She was determined to leave a positive mark on everything she touched, and she did indeed.”

Through sheer grit and determination, Caughman said, Drisko turned the new dental building into a reality and laid much of the groundwork for the Education Commons (see page 28). “Those buildings have her footprints all through them,” Caughman said. “She didn’t think small and she didn’t think slow.” 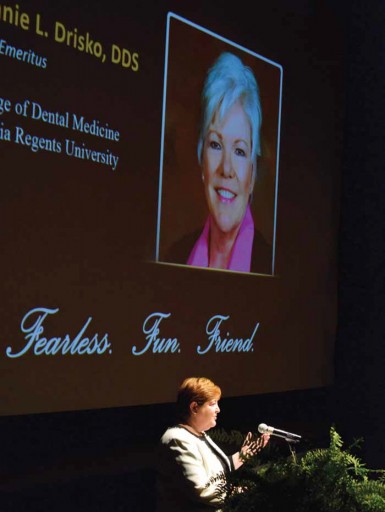 GRU Director of Pastoral Care Jeffrey Flowers remembers congratulating her during the dental building’s grand opening. “I asked her, ‘What’s next?’ and she said, ‘Oh, there’s so much more to do! A building is just a building; it’s what we fill it with that matters.’”

He laughed that people “shook with fear when she said, ‘You know, I was thinking: Why don’t we. . .’” No one ever doubted that she would manifest her ideas, Flowers said, and they knew a whirlwind of activity would unfold toward that goal. “Her philosophy,” he said, “was, ‘Why have ideas if you don’t act on them?’”

Dr. Richard Valachovic, President and CEO of the American Dental Education Association, remembered her as a trailblazer. “Our world is better off because of who she was,” he said. “She made her opinions known in a way that was heard but respected by others.”

Dr. Doug Torbush, President of the Georgia Dental Association, concurred. He recalled running into her at a coffee shop in Atlanta once, “and there was not a person in that coffee shop who wasn’t her friend by the time they left,” he said. “She was a true gem.”

Torbush was one of many who noted her excellent skills as a cook and entertainer. Drisko, he said, frequently opened her home to others and made them feel like family.

Said Dr. Bruce Ashendorf, Chairman of the Hinman Dental Society of Atlanta’s Board of Trustees, “She was warm and
effervescent . . . a true steel magnolia. She had tireless energy, wonderful vision, and amazing foresight. Her influence was amazing, and it will be felt for a very long time.” 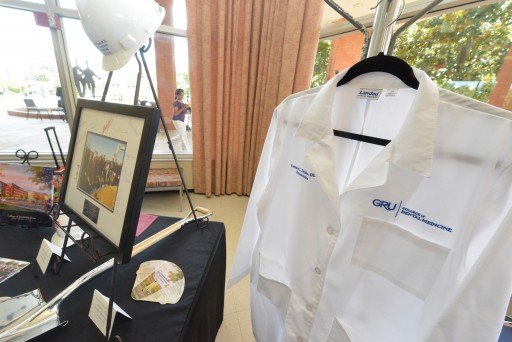 The memorial service also featured art and music, including student Tenecia Harris’ rendition of “Wind Beneath My Wings” and Kira Dittfurth’s performance of “O Mio Babbino Caro.” The latter performance, fittingly by a member of Drisko’s beloved staff, paid homage to one of her favorite art forms: opera.

“It was so obvious,” said Dr. Rhoda Sword, President of the College of Dental Medicine Alumni Association, “that she cared deeply for all of us. She knew we were all capable of greatness and took great strides to see that we got there.”

On behalf of the Alumni Association, Sword presented a portrait of Drisko to the dental school and gave a smaller version to her family.

So many members of the College of Dental Medicine community signed up for GRU’s annual Day of Service, just as they did the year before, that a specific project was created to do justice to the commitment.

The college “adopted” the Gertrude Herbert Institute of Art, with 100-plus CDM volunteers spiffing up its museum and gallery during the daylong workfest Sept. 6.

“It’s evident by the artwork gracing the walls of the CDM – pieces mostly gathered by her efforts – that Dr. Connie Drisko was an art lover,” says Dean Carol A. Lefebvre of her recently deceased predecessor. “She was also on the institute’s Board of Trustees, and it was here where two roads converged.”

The volunteers painted, gardened, replaced rotted wood, and even created a walkway for weddings – a lasting tribute to both the community and Drisko.