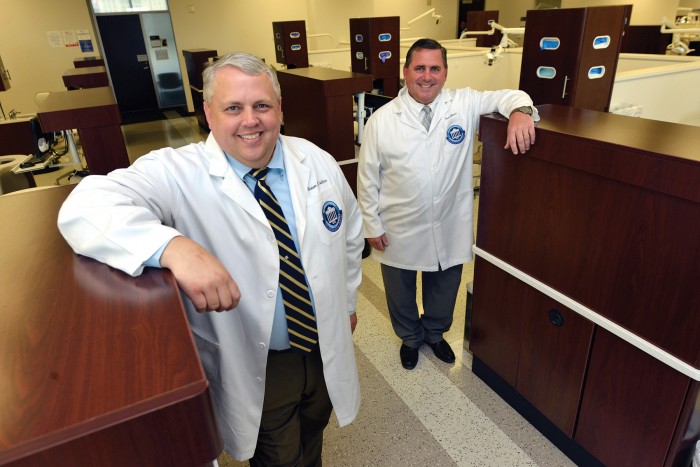 Brian and Ken Sellers talk about teeth the way they once talked about cabinets.

When the brothers, both seniors in the College of Dental Medicine, describe how their former careers as cabinet makers prepared them for dentistry, most listeners tend to fidget in their seats.

“It makes them uncomfortable. They don’t want to think that building a cabinet is anything like fixing teeth, but they’re similar,” says Ken, who at 44 is the older of the two brothers, originally from Hazlehurst, Ga.

Both professions require skillful hands and attention to detail, he explains. Both crafts beautifully meld form and function.

“In each, you’ve got structural considerations and esthetic priorities. The form and function go hand in hand. It’s a bit of science and a bit of art. There’s a lot of overlap. You sand down composites with different grits, just like cabinets,” Ken says.

Neither brother planned for a midlife career change. A devastating fire changed that.

“We started Sellers Brothers Cabinet Co. together. It was our company. We built it up to 30 employees, set up a manufacturing plant, and did commercial and residential work all across the Southeast,” says Brian, 41. “The fire was devastating. We saw everything go down in a big blue heaping ball.” That was Oct. 31, 2009.

“I got a call late Halloween night that the business was burning,” Ken says. “We got there and there were six fire trucks pumping water. They never could slow it down. We lost everything.”

The brothers later found out the fire was caused by an electrical short in a saw. Insurance money helped pay their debts, but without a shop, the brothers lost a major contract.

“We had to decide if we wanted to start over from scratch. It was devastating, but we realized life gives you very few do-overs,” Ken says. “This was our opportunity. We could be anything. We could do anything.”

Says Brian, “It hit us: We had nothing else to lose.”

The two remembered a friend who became a dentist in his 30s. “Growing up, we didn’t talk about dentistry,” Brian says. “We didn’t know anything about it. But when we began investigating it as adults, it made a lot of sense.”

Their next step was to meet with Dr. Carole Hanes, Associate Dean for Students, Admissions, and Alumni. “She took us very seriously,” says Ken. “She said we should take all our prerequisites, and if we got A’s, we should apply for dental school. But if we got any B’s, we needed to go back to cabinet making.”

They began by retaking calculus and physics at South Georgia State College and Georgia Southern University in 2010. Says Brian, “We treated it like a job. We took as many credit hours as we could, anything that would help us get into dental school.”

They applied to the College of Dental Medicine and were accepted, enrolling in 2011. There was no question they would do it together, as brothers.

“Brian and I have spent every single day together,” says Ken. “We have our classes together and generally sit together. I get called Brian and he gets called Ken. We do a lot of things together, but we generally work with two different perspectives. It’s very beneficial and it’s nice that he’s there. I know he always has my back, and we keep each other on track.”

There was also no question that GRU was the right school for them. “I am from Georgia. This is where I grew up. This is where I want to practice. This is where I’m going to raise my children. And this is a school that will make you an extremely good clinician,” says Ken, now a member of the College of Dental Medicine Admissions Committee.

Both are better students this time around. Ken graduated with an English degree from the University of Georgia in 1993. Brian earned a marketing degree from Georgia Southern University in 1996.

“Both are an absolute delight to teach because they know why they are here, and they understand how everything they learn is going to help them become successful dentists. I can’t think of any students who are more appreciative of the teaching they receive or who have more positive outlooks on each and every experience, good or bad,” says Dr. Jan Mitchell, Associate Professor of Oral Rehabilitation. “They already know that they will learn from it either way.”

The fire taught them that anything can be a blessing and an opportunity. Says Ken, who plans to practice pediatric dentistry, “It’s all about your perspective. The things I’ve done up through now I believe were the Lord’s way of preparing me for this next step. We’ve done customer service. We’ve managed employees. We were in the fire to become better dentists.”

They hope to see their children learn from their example. “I want my kids to see my study and sacrifice,” says Brian, who has two boys, 15 and 11, with his wife, Mia. “It’s an experience for us all. We really like the idea that you can’t let age limit what you do.”

Others have been inspired by their story as well, they say. A couple of people have cited the brothers’ story as their inspiration for pursuing dental careers. “And that to us is just spectacular,” says Brian, who plans a career in oral surgery.

Ken, the father of children ages 10, 8, and 5 with his wife, Angie, agrees. “You’re never too old to start over. It’s never too late if you’re willing to go for it. Every day is brand new. It’s not a defeat. It’s an opportunity to get better and move on. You show up and keep chugging along. We see it as a great adventure. I want my kids to see that anything you want to do, you can do. I tell them you can be anything you want to be, right after you go to dental school.”