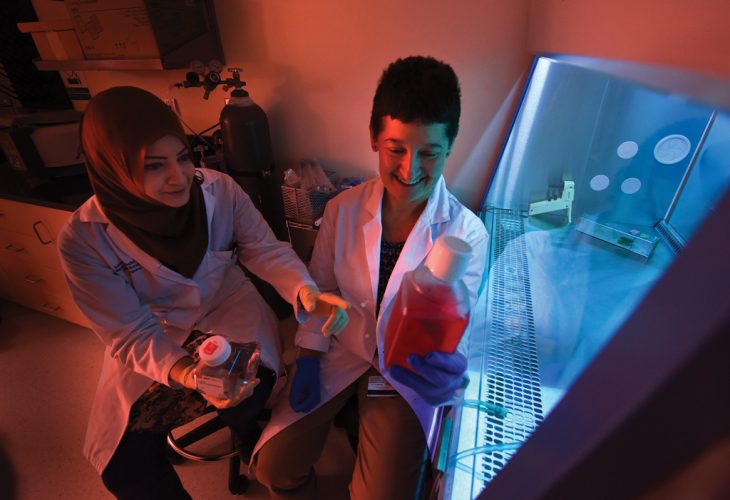 One of the most vexing problems in health care involves one of the body’s most vital organs: bone.

Researchers have long probed how to protect, strengthen and mend bone without onerous side effects or unintended consequences. The stakes are high: Over 1 million Americans annually suffer fractures, with causes including sports injuries, car accidents, falls and osteoporosis (bone weakening due to aging). The latter is a leading cause of disability and hospitalization for approximately 54 million Americans. And not all bone fractures are created equal: some, such as skull fractures, take much longer to heal than others, and some fail to heal at all.

A recently recruited Dental College of Georgia scientist is seeking solutions to these problems by looking not just at bone cells, but at their gatekeepers.

“I’ve always been interested in the extracellular matrix,” says Dr. Marion Cooley, an assistant professor of oral biology and diagnostic sciences who joined faculty in 2017.

“I’d studied how the extracellular matrix is involved in heart development and focused on one protein in particular: Fibulin-1,” she says. “Using mouse models, I learned the protein is critical in the formation of lungs, heart, bone and blood vessels. I’m particularly interested in how the protein promotes bone formation and bone repair.”

Her work has become increasingly illuminating as she studies the development of mice bred without Fibulin-1.

“There’s a protein important in bone development called Bone morphogenetic protein 2, or BMP-2,” she says. “It’s vital, but it’s an inefficient molecule and needs the help of other extracellular matrix proteins to promote bone formation.”

She thinks Fibulin-1 may be a critical component in the process. “We know Fibulin-1 interacts with BMP-2,” Cooley says. “We want to know whether Fibulin-1 binding to BMP-2 improves the efficiency of this growth factor for bone formation or whether other things are happening.”

As she studies the mice bred without Fibulin-1, she is eager to probe their development. “Does the lack of Fibulin-1 affect the way bone repairs itself?” she muses. “Do the mice have defects? These are the kinds of things we’ll be looking for.”

Says Cooley, “BMP is already used in bone repair, but because it is such a small molecule, it has a tendency to diffuse out into the extracellular matrix. A lot of it is required, and even when you have an adequate amount, you can get bone forming where you don’t want it, as well as incomplete bone formation because it’s not forming in the right location.”

If she and her colleagues validate the importance of Fibulin-1 in helping BMP-2 do its job, new avenues of treatment will ideally open up, helping spur the regrowth of bone without the growth spurt going awry. “If the research goes as planned,” she says, “it could be used in any area where bone formation is either slow or doesn’t occur. The primary applications would be craniofacial areas and the skull. Bone is more porous without Fibulin-1; we think Fibulin-1 is critical for regulating cranial bone volume. If using it enables us to use less BMP-2 for bone repair and to help focus it in a particular area, there are lots of potential applications.”

Cooley is gratified that her research is unfolding at an institution so committed to this area of focus. “There’s a strong bone group here, so I’m able to collaborate with other researchers,” she says. “And having dental specialists to talk to about bone repair is very important. There’s a lot of potential for translational research.”