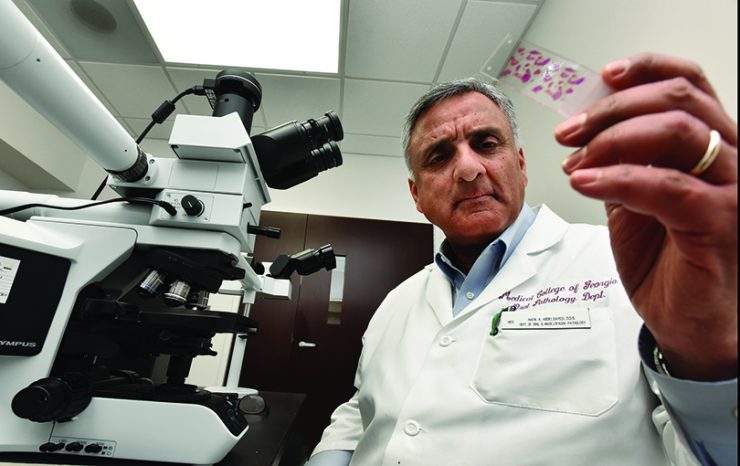 On the Horizon: Focusing on Differences

Not all cysts are created equal.

A DCG pathologist and researcher is studying differences between cystic jaw lesions that can lead to radically different treatment options.

However, the first phase of his research has identified a subset of OKC with an indolent behavior and microscopically identical to the typically aggressive form. Abdelsayed recently obtained an intramural grant to investigate the differences between the two versions of OKCs with state-of-the art DNA sequencing microscopic technology.

Determining the genetic mutations for each group would allow precise identification of the biologic behavior and differentiation of the two versions of the cysts. “Additionally, and more importantly,” Abdelsayed says, “this would allow personalized treatment that may be tailored to the specific form according to genetic typing, therefore sparing patients with the indolent form unnecessary aggressive surgical treatment.”

Says Abdelsayed, “Using a DNA microdissection microscope, we can obtain much more information from the OKC lining (the epithelium) than we could with technology used in the past. For instance, the technique I previously used allowed looking into only 170 genes of the cell genome. The new technology allows us to screen the entire DNA, searching for all possible mutations.”

The microscope, housed in the Augusta University Department of Biology, can identify all potential mutations in archived patients’ tissue specimens in the DCG Oral & Maxillofacial Pathology Laboratory. “This will allow us to put the data together and sort out what distinguishes the two versions of OKCs, providing a wealth of data,” he says.
He is particularly interested in PATCH 1, a gene mutation common to many sporadic OKCs as well as basal cell carcinomas. The mutation has also been identified in Nevoid basal cell carcinoma syndrome, a genetic syndrome containing both lesions.

Abdelsayed hopes his studies will not only support personalized treatment for these cysts, but also identify genetic targets for available anti-proliferative drugs. Says Abdelsayed, “I am excited about the potential.”

Like
Like Love Haha Wow Sad Angry
1
Latest On the Horizon Oral and Maxillofacial Surgery Rafik Abdelsayed
Share your story
Our best stories often come from suggestions from the campus community.
Submit News

Answers Along the Way: Broadening Your Perspective