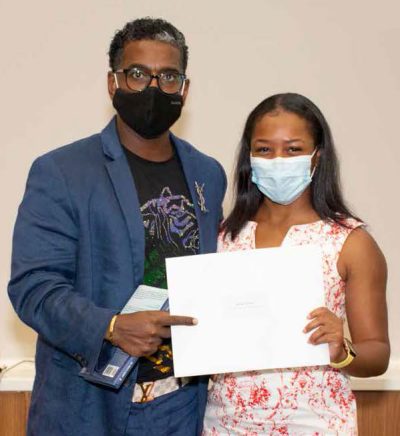 Dr. Rico Short is accustomed to overcoming long odds. Short (’99) was raised in Columbus, Georgia by a single mother who toiled long hours at a textile mill just to keep food on the table. No one in his family had ever gone to college, but Short was determined to be the first. And he envisioned his future career with crystal clarity.

“A dentist I knew, Dr. Isaac Hadley (’74), was like a father to me,” he says. “I was always in his office, filing charts and running errands. He mentored me and steered me into dentistry.”

Short earned a bachelor’s degree in three years at Morris Brown University, graduating as valedictorian of his class, then enrolled at DCG. As laudatory as Short is of the dental education he received, he acknowledged numerous challenges stemming from his status as the sole African-American male in his class. He often felt subtly excluded — or worst, singled out for unfavorable scrutiny.

“What kept me going was my faith in God and knowing I was doing the right thing,” he says. “I wasn’t about to let anybody get in the way of my achieving my dream.”

Short graduated with strong grades and an even stronger sense of purpose. He joined Hadley’s practice, eager to treat the underserved. After performing multiple root canal procedures, he knew he’d found his niche. “I found myself doing a lot of endodontic treatment and really enjoying it. I wanted to get better at it.”

He completed specialty training in endodontics at the Nova Southeastern University College of Dental Medicine in 2002, then established Apex Endodontics PC in Smyrna, Georgia. “Taking care of people in a pain-free manner is very fulfilling,” Short says. “Root canals have a bad rap, but most of my patients fall asleep while I’m working on them. Being able to instantly relieve someone’s pain is one of the most satisfying things a healthcare professional can do.”

He is a diplomate in the American Board of Endodontics, and his patients include numerous celebrities. “But I’ve never lost the common touch,” Short says. “My goal is to make everyone feel like a star under my care.”

Running a solo practice, Short says, suits his personality. “I can set my own hours and be my own boss,” he says. “No one is micromanaging me. But the flip side is that I’m responsible for everything. Still, I’m glad I get to steer the ship. I wouldn’t want anyone else doing it for me.”

Tragically, his hard-earned achievements almost vanished in the blink of an eye during a family vacation two years ago. Short and his wife, Angela, had taken their daughters, Ava and Jayla, to a water park. Short hit his head as he descended a slide. He was holding his nose, and the powerful impact caused his thumb to pierce his eyeball.

The eyeball was so badly damaged that he was told he would never regain vision in that eye. “I was out of work for seven months and thought I would lose the ability to practice,” he says. “I was terrified I would lose everything I had worked so hard for.”

But after numerous procedures, including a Hail Mary surgery with no guarantee of success, Short regained his vision. “By the grace of God, my eye was repaired and I was able to slowly get back to my practice,” he says. “Now, it’s like nothing ever happened. I’m busier than I’ve ever been.”

He is busy not only with his practice, but also with pursuits including writing (he has authored two inspirational books and plans a third), international lecturing, community involvement and philanthropy.

The latter includes a substantial gift Short made to DCG five years ago. He then began a grass-roots effort to grow the gift into an endowment. “I appealed to various businesses, organizations and individuals to help grow my scholarship fund into a permanent fixture,” he says.

The endowment awards scholarships to select minority students with high academic standing yet few financial resources. “I’ve been where they are,” Short says, noting he hopes the number of scholarships can be increased as the endowment grows. “I wanted to make sure I could help lift the burden for people like me.”

Says Rhonda Banks, DCG director of philanthropy, “These kinds of gifts are among the most meaningful we encounter. Dr. Short has such a poignant and admirable backstory, one that clearly resonates with many of our students. Knowing Dr. Short’s heart, I know how fulfilling it is for him to help others who face the same kinds of struggles he did. Likewise, it is an incredible honor for DCG to help make his legacy as impactful as possible.”

Short makes a point of helping as many young people as possible, in or out of the dental profession. “My main focus is to encourage youths to set goals,” he says. “I give them realistic advice on how to achieve them.”

His own daughters, now teens, have encountered challenges of their own. “They are minorities in a private Christian school, and they started noticing they were different when Barack Obama ran for president,” he says. “They began to hear unkind and unflattering things.”

He wishes he could shield them from every sling and arrow, but he and his wife are confident in their daughters’ resilience.

“I’ve shared my own stories with them,” says Short, “and I emphasize that they can’t let other people’s opinions keep them from becoming everything God is calling them to be.”

His most important message to them? “None of us know what the future holds,” Short says, “but trust in God. He has the final say.”