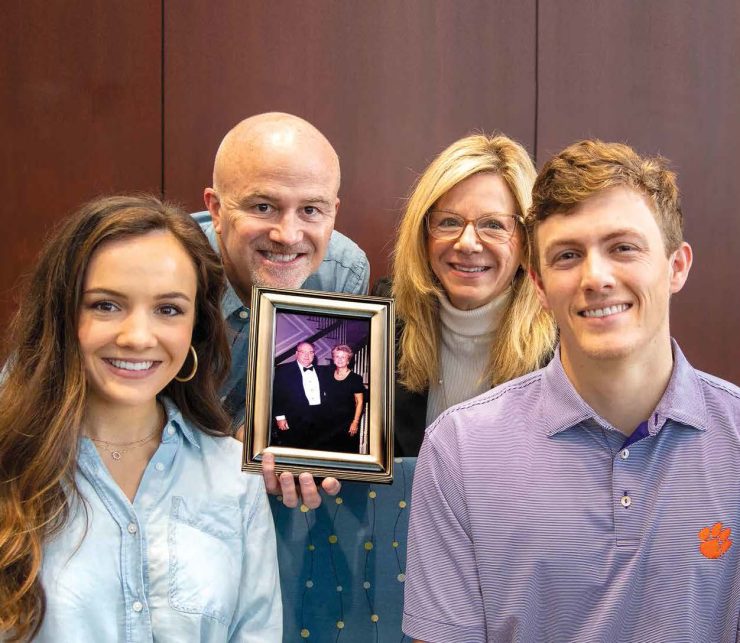 Dentistry has always felt like more than a profession to Dr. Allison Owings Bass (’22). It feels like home.

Allison, who earned her dental degree this spring, grew up in North Augusta, South Carolina, as the granddaughter of one of the DCG’s earliest graduates, Dr. David Owings (’73). Owings, who died of Parkinson’s disease in 2016, was extremely supportive of the DCG, its Alumni Association and professional dentistry in general during his decades-long career. His enthusiasm had quite a ripple effect: two of his children, Alan Owings and Becky Owings Sam, earned DCG degrees as well and joined his practice in the early 1990s.

That practice, Owings and Sam Dentistry in North Augusta, was a frequent childhood hangout for Allison, the daughter of Alan and his wife, Laura.

“My grandparents (David and Wilma) picked me up from school every Wednesday, and I spent a lot of time in the dental office,” says Allison. “I started working there in high school and fell in love with the relationships dentists have with their patients. Those relationships last for years, and I saw how invested my family was in their patients’ lives.”

As her grandfather’s Parkinson’s disease progressed, she also absorbed lessons in resilience, perseverance and compassion. “I acquired an early understanding of the trials some people face,” she says. “Papa sometimes needed extra time to communicate or complete a task, so I learned a lot about patience. And even when he wasn’t directly involved in patient care anymore, he still came to the office every day. It was so obvious how much he loved his patients and his work. I thought, ‘Dentistry must be awfully special if even Parkinson’s doesn’t get in the way.’”

Although Allison knew she wanted a career in patient care, she originally opted for nursing when she attended Clemson University — actually the same path that her Aunt Becky had chosen a generation earlier.

Yet even before her nursing degree was in hand, she knew she couldn’t resist the pull to dentistry. “I thought, ‘Just in case I want to go to dental school, I better go ahead and get my prerequisites out of the way. I had heard organic chemistry was a beast, but I loved it. My mom has a chemistry background, so it came naturally to me.”

As was true of her grandfather, Allison found that her enthusiasm was contagious. Her husband, Jacob Bass, considered several career options after earning his Clemson degree, including physical therapy, construction, repair development and taking over his family’s restaurant, Old MacDonald’s Fish Camp. But like his wife, he opted for dentistry. “The career marries his original dream of healthcare and the hands-on work he loves,” says Allison. He is scheduled to earn his DCG degree in 2024.

“We both had really great role models,” says Allison, who joined the family practice. Noting that, sadly, Jacob’s father died recently, she adds, “Both of our dads were very people-oriented, and both were the hardest-working people we knew. They always taught us that people matter. I want to show people love and give my patients the best that I can.”