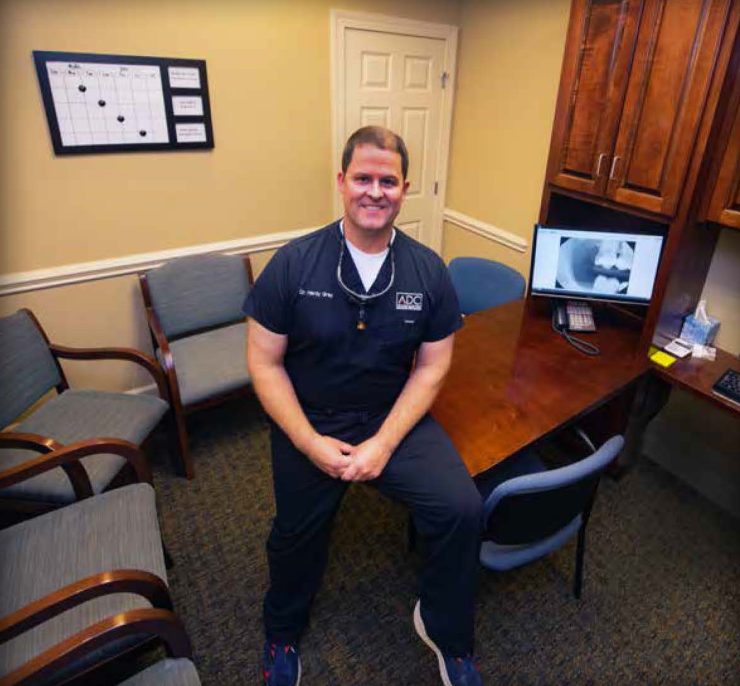 Life on the farm prepared Dr. Hardy Gray well for the rigors of dental school.

“I was definitely already good at time management,” says Gray with a laugh.

The 2016 DCG graduate and recipient of the 2021 Outstanding Young Alumnus Award has had a spring in his step since he was a toddler.

“I’ve always stayed busy,” he says in what may be the understatement of the year. Gray, who grew up on a farm in Louisville, Georgia, gravitated naturally to the unforgiving demands of raising crops and tending livestock. He was also a gifted athlete and an enthusiastic tinkerer, whether putting his skills to use as a grease monkey or carpenter.

“I love to work with my hands,” Gray says.

In addition to farming, Gray’s parents ran a construction business — a serious contender for his career aspirations. And sports were never far from his mind.

As an undergraduate at Georgia Southern University, he split the difference, majoring in civil engineering (a great fit for his deft fingers and sharp mind) and spending every moment outside the classroom on the gridiron. He played center and offensive guard for the Georgia Southern Eagles, racking up impressive stats and a string of winning seasons.

Gray then embarked on a brief engineering career, followed by two years working for Norfolk Southern Railway, but he couldn’t shake the nagging feeling that his passions lay elsewhere. “I never stopped thinking about dentistry and finally decided to go after my dream,” he says.

He earned a second degree from Georgia Southern — this one in biology — then enrolled in DCG in 2012, finding it a seamless transition. “I worked as an assistant for two dentists, Dr. Hudson Powell and Dr. Jarrett Walden, while earning my biology degree, so I had a good idea of what to expect,” Gray says. He and wife Lundie’s first child was born shortly before his enrollment, but the couple handled the demanding schedule with ease. Gray even incorporated research into his studies, probing bone regeneration and the link between B12 deficiency and certain birth defects.

“I really enjoyed dental school,” he says. “I was in one of the first classes after the new building opened, and it is truly state-of-the-art. I also love Augusta; it’s very diverse. It’s small, but you’ll find just about everything there that a big city like Atlanta would offer.”

A decade later, Gray is busier than ever. He and his wife now have four children, and he and his two partners man their two Advanced Dental Care practices in Valdosta, Georgia. His partners, Drs. Ashley Moorman and Barclay Woodward, are also DCG graduates.

“It’s a general dentistry practice — we treat everyone from ages one to a hundred — and we love the family atmosphere our practices encompass,” Gray says. “We support many local events and sports programs.”

He relishes the rich relationships he forms with his patients. “I love the diversity and the mix,” Gray says. “And my wife is awesome. She handles things at home and is truly the glue that holds everything together.”

Their children are involved in various extracurriculars — dancing, soccer, baseball — and Gray himself still enjoys fishing, hunting and helping coach various sports. He and his wife hope to have enough acreage in the future where he can resume his love of working the land.

Gray is also deeply committed to his Christian faith, which he credits for his immense life satisfaction.

“I didn’t take a direct path, but I could always see myself where I am today,” he says. “I don’t think my life could have turned out any better.”

Giving Back: Distinguished Alumnus a Pillar of His Community