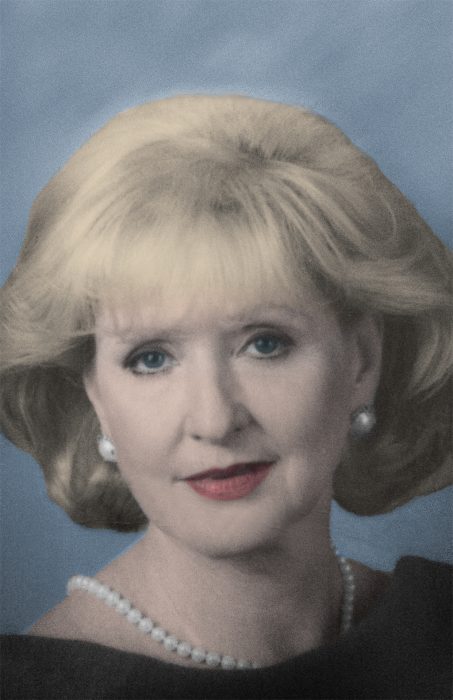 Rita Atlas Goldstein Wolfson, a vivacious and beautiful woman who drew second glances everywhere she went, never took her charisma for granted. Instead, she used it to turn heads and hearts toward causes for which she was passionate.

“People used to always tell me that my mother was gorgeous, at every age,” says the youngest of her five children, Dr. Adam Goldstein, a 1987 graduate of the Medical College of Georgia.

His cousin, Dr. Ronald Goldstein, agrees. “Rita was a stunningly beautiful woman whose presence attracted attention just by walking into a room.”

But physical beauty was only one attribute. More importantly, says her son, “she was warm, funny, sweet, an amazing artist, a philanthropist … and she was really, really strong.”

His mother, Rita – and everyone called her Rita – died Feb. 1 at age 90 in her home of Chapel Hill, North Carolina. She left behind a legacy of stunning generosity, tirelessly using her gifts and talents to improve the human condition, according to the many who knew and loved her. One of the chief beneficiaries of her philanthropy was The Dental College of Georgia.

“It would be impossible to overstate the impact of the Goldstein family and its matriarch, Rita, on our college,” says Dean Carol A. Lefebvre. “We owe so much to the family’s vision, dedication and generosity.”

Rita’s long marriage to Dr. Marvin Goldstein, an orthodontist, civil rights activist, philanthropist and businessman who died in 1997 at age 80, was characterized by a deeply committed partnership, both as husband and wife – they raised five high-achieving children – and as fellow humanitarians.

The New York Times eulogized Goldstein upon his death, citing his distinction as the owner of Atlanta’s first integrated hotel, The American. The hotel “became a haven for black people turned away by other establishments and for civil rights workers,” the newspaper reported. “Among them was the Rev. Martin Luther King Jr., who held meetings there with his top aides even before the hotel opened [in 1962].”

When the Ku Klux Klan picketed the hotel, agitating for separate water fountains for blacks and whites, Goldstein reportedly responded, “Then we won’t have any water fountains.”

Rita, who was raised in Washington, D.C., by parents stressing an unwavering commitment to the Judaic principle of giving back, was right by his side in that and every other endeavor – including his diligence in helping establish the Hebrew University School of Dental Medicine, the growth and sustenance of the Ben Massell Dental Clinic in Atlanta and in bringing a public dental school to Georgia.

Goldstein had earned his dental degree from Emory University in Atlanta, but he strongly championed public education and was on the forefront of convincing the Georgia Legislature of the need for a first-rate yet affordable dental education in his home state. “He was one of the first to recognize the need and worked very closely with [Dr. Judson C.] Hickey to make it happen,” says his nephew.

Hickey, of course, went on to become the founding dean of the school, which opened in 1969.

Says Lefebvre, “A dental education requires cutting-edge facilities and equipment, as well as extremely small faculty-student ratios to ensure mastery of highly complex procedures. This is a costly proposition and one that wasn’t an easy sell, even in a state that had no public dental school. We’re here today precisely because of the persistence and persuasion of leaders like Drs. Goldstein and Hickey, and we’re now the only dental college in the state. Every citizen owes an enormous debt to their efforts.”

As the Goldsteins’ activism intensified, so did their influence. The couple hosted luminaries including Georgia governors and Israeli prime ministers at their home and hotel in Atlanta. “A highlight of her life,” read Rita’s obituary in the Atlanta Journal-Constitution, “was the invitation from President Carter to her and Marvin to come to the White House for the Camp David Mideast Peace Signing. Rita met many world leaders, including Eleanor Roosevelt and President Clinton.” Rita co-chaired the United Jewish Appeal North America World Assembly in Atlanta and received the Friends of the Hebrew University’s Woman of Valor Award.

But despite their global reach, the Goldsteins never wavered in their support of one of the causes closest to their home and closest to their hearts – the success of the dental college they helped launch in Augusta. In 1978, Goldstein founded – and personally funded – DCG’s Marvin C. Goldstein Lecture Series, ensuring that the brightest minds internationally would share their wisdom and expertise in Augusta. When he died, Rita established an endowment for the lectureship, ensuring its continuation in perpetuity.

Says her nephew, “The lectureship draws the best speakers nationwide and internationally in dentistry, and hundreds of dentists attend annually. This year, for instance, one of the leading ceramists in the world, Dr. Ed McLaren, was the guest lecturer. This is the caliber of speaker we’re able to attract; it’s a Who’s Who of dental educators. Marvin presented a sculpture – a Frabel burning bush – to every speaker, and after he died, Aunt Rita would come to Augusta to make the presentation. She enjoyed it immensely.”

As voluminous as the family’s contributions have been, Rita’s loved ones say their most enduring memories of her legacy will be personal ones.

Says her son, “Mom’s sculptures grace homes in every community she lived in, and she gave away paintings she made to anyone who came to visit.”

Her grandchildren remember her generosity on the Sabbath and for social service needs in Israel. Says her grandson, Jared Goldstein, “She taught me that when you give to charity, you don’t give a token; you give according to your means. She was the most philanthropic person I ever knew.”

And the most fun.

“She made sure our home was filled with family and friends every Sunday and every summer,” her son says. “I’m talking 50, 60 people. And when she wasn’t with the people she loved, she wrote them the most wonderful letters. Her letters made you feel that you were special and the most important person in the world.”

Says her nephew, “She was the matriarch of the family. She brought everyone together. She was just amazing.”

And few things, Rita’s loved ones say, gave her more pride than the dental college she and her husband helped bring to fruition. “She was very, very proud,” her nephew says, “that it became one of the finest schools in the country – one of the finest in the world.”

The field of dentistry continues to reap huge benefits from the Goldstein family’s legacy.

Dr. Ronald Goldstein wrote the all-time bestselling consumer book on cosmetic dentistry, Change Your Smile: Discover How a New Smile Can Transform Your Life (Quintessence Publishing Company). The book, translated into 12 languages, is now in its fourth edition.

DCG has honored his achievements with its Ronald Goldstein Center for Esthetic and Implant Dentistry and Ronald Goldstein Resource Room, which houses, among other items, his extensive Coca-Cola collection.

Marvin C. Goldstein Lecture Series. For 20 years, until his death in 1997, the family patriarch sponsored an internationally renowned dental clinician to share clinical expertise at this annual event. His widow provided a generous gift to ensure its continuation.

Dental Care That Runs The Gamut