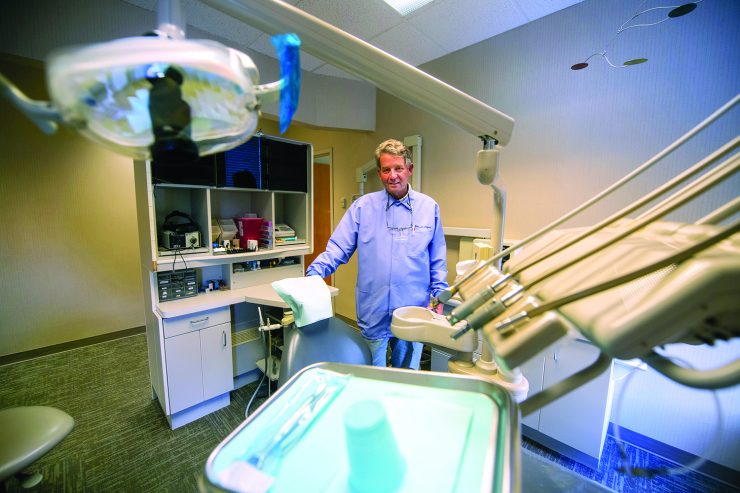 Giving Back: Distinguished Alumnus a Pillar of His Community 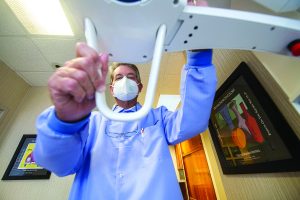 Dr. Ben W. Jernigan Jr. has been on the fast track most of his life.

“I think I was born to be a dentist,” says Jernigan (’76), who grew up in the Atlanta area. “I’ve been very fulfilled my entire career. I’ve never regretted a single day.”

That being the case, he was a prime candidate when DCG (then the Medical College of Georgia School of Dentistry) was in its infancy and eager to help address a statewide shortage of dentists. Emory University housed the only other dental school in Georgia at the time (that school is now closed), and DCG Founding Dean Judson C. Hickey wasted no time gearing up to meet the state’s needs. The first class enrolled in 1969, and the inaugural class graduated in 1973 to take their place in the state’s dental workforce.

That’s the year Jernigan enrolled. After completing his prerequisites at the University of Georgia, he completed his dental studies in three rather than the customary four years. Despite the compressed schedule, he found himself thoroughly prepared to hang his shingle when he graduated. “My dental education was outstanding,” says Jernigan, who has practiced general dentistry in Decatur, Georgia, for over 45 years. “The faculty were completely committed to the students and had great relationships with us. After being out a while and comparing my experience to that of dentists from other schools, I realized what an exceptional education we had.”

The admiration is mutual. DCG named Jernigan its 2021 Distinguished Alumnus.

“Ben Jernigan is a shining example of not only exceptional skill, but of the kind of caring commitment we seek and help cultivate in all of our graduates,” says DCG Dean Carol A. Lefebvre. “He has served the same community throughout his entire career and now treats children and grandchildren of his original patients. He truly embodies what it means to a trusted, respected and beloved member of the community.”

Says Jernigan, “My life is my job, and the school has meant a lot to me. I’m very honored and hope I can keep contributing. The question I always hear is, ‘You’re not going to retire on me, are you?’”

Luckily for his patients, the answer is no, at least not any time soon. “I’m a very full-time, full-practice dentist,” says Jernigan. “I’m busy all day every day. I have long-term relationships with my patients, and they mean a great deal to me.”

He notes that whereas technological advances have transformed dentistry in many ways, the nuts and bolts remain the same. “I do the same thing now I did when I started my practice: I treat patients as individuals. I try to provide what’s best for them. Some materials and technology may be different now, but basically, I’m taking care of their teeth. That hasn’t changed.”

Jernigan, former president of the Georgia Dental Association, is also heavily involved in shaping the big picture of his profession. “Dentistry has headwinds we’ve never faced before, and we need to be consistent in our message,” he says. “It’s more important than ever for all dentists to be involved so our voices are heard and we have a seat at the table (regarding legislation, professional standards and other guiding principles).”

He considers his contributions a privilege and emphasizes that he has received more than he has given. “It became very meaningful for me to become engaged in aspects and issues of dentistry that don’t necessarily involve direct patient care,” Jernigan says. “This has been a great source of fulfillment, and I’ve developed many friendships with other dentists that I would not have made otherwise.”

Dentists are most effective, he notes, when presenting a united front. “Being president of the GDA was a highlight of my career, representing a culmination of years of involvement, learning the issues of our profession and being a part of solutions to problems,” he says. “It was also an honor to be acknowledged by my fellow dentists around the state. My main goal was to try to keep our association moving forward and increasing the number of dentists who join the GDA. My theme was ‘Better Together,’ and I emphasized what dentists can do as an association that we cannot do as individuals.”

His initiatives live on to this day, including the Lunch and Learn seminars that increase the presence of the GDA on the DCG campus. He urges dental students to embrace organized dentistry and community involvement in general at an early stage in their careers.

“Dentistry has done a lot for me,” Jernigan says, “and it’s a pleasure to give back in whatever way I can.”