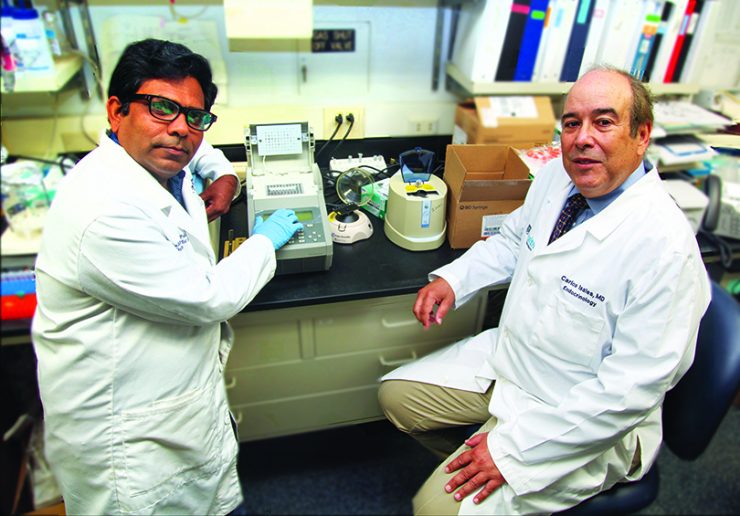 A group of tiny RNA that should attack the virus causing COVID-19 when it tries to infect the body are diminished with age and chronic health problems, a decrease that likely helps explain why older individuals and those with preexisting medical conditions are vulnerable populations, investigators report.

MicroRNAs play a big role in our body in controlling gene expression, and also are a frontline when viruses invade, latching onto and cutting the RNA, the genetic material of the virus, says Dr. Sadanand Fulzele, aging researcher in the Department of Medicine and Center for Healthy Aging at the Medical College of Georgia.

But with age and some chronic medical conditions, the attacking microRNA numbers dwindle, reducing our ability to respond to viruses, says Dr. Carlos M. Isales, co-director of the MCG Center for Healthy Aging and chief of the MCG Division of Endocrinology, Diabetes and Metabolism.

Much like not having enough troops on the ground in an actual war, the coronavirus is then better able to do what it does naturally, which is hijack our cell machinery so it can replicate, say the researchers who report in the journal Aging and Disease what appear to be key microRNA involved in responding to this virus. They have a longer-term goal of identifying the biggest hitters and replenishing those troops.

They looked at the RNA sequence of actually two coronaviruses, SARS, which surfaced in 2002, and SARS-CoV-2, which causes COVID-19, and the sequence of the microRNAs that appeared to be attacking the virus, then used computer simulation to figure out which would logically fit together like puzzle pieces. Their perusal included four samples of SARS and 29 samples of SARS-CoV-2, taken between January and April 2020 from five continents covering 17 countries from the United States to Germany to Thailand.

They found 848 microRNAs that target the SARS genome and 873 microRNAs that target the SARS-CoV-2 genome. They found 558 of the microRNAs fighting SARS also present in SARS-CoV-2, while 315 microRNAs were unique to SARS-CoV-2, and 290 were unique to SARS. MicroRNAs most proficient at attacking SARS-CoV-2 showed more than 10 target sites and might ultimately be found to be the most proficient at fighting the virus, which, in a few months, has changed much of the way the world functions.

They also found the microRNAs targeting SARS-CoV-2 were associated with more than 72 biological processes — from the production of molecules to the immune response — and that many are known to become dysregulated and/or diminish in number with age and with underlying medical conditions like diabetes and cardiovascular disease, a likely factor in the increased disease presentation and death rates seen in these individuals, the investigators say.

An example is microRNAs like miR-15b-5p, which has a high affinity for SARS-CoV-2, but is downregulated in coronary artery disease, says corresponding author Fulzele. In healthy, younger people, these microRNAs whose nature is to bind to the virus, are more apt to do as they should and prevent replication, he adds.

In the 29 worldwide samples of SARS-CoV-2, 19 had identical microRNAs, which indicates the virus has a fairly uniform presence internationally and that any effective treatments or vaccines should have broad impact, Isales says.

Next steps include studies in culture and lab animals to ensure findings are consistent with the computer analysis of human microRNAs in this study.

“The most important and striking feature of COVID-19 is the increased case fatality rate in aged individuals,” the investigators write, with the Centers for Disease Control and Prevention reporting that nearly half of patients requiring hospitalization are age 65 and older, and these more senior individuals account for about 80% of the deaths. Fulzele, Isales and their colleagues wanted to know more about why.

“My perspective is there is a key set of microRNAs that are important in triggering this abnormal response, in making older patients more susceptible,” says senior author Isales. “We are looking at microRNAs in general dropping, but there is a specific subset that is key. The question is whether we can we target those as a therapy.”

Cocktails of multiple key microRNA, potentially given through the nose, might help restore sufficient levels of the key virus fighters, the investigators say.

They already are moving toward producing synthetic microRNA that could supplement this frontline weakened by age or disease, Fulzele says. Future studies also include pinning down which microRNA would be most impactful as an adjunct therapy, for example with the drug remdesivir, recently approved for COVID-19, which works to stop the virus’ pirating of healthy cell machinery.

Another question to pursue is whether some younger people, who also are seriously sickened by SARS-CoV-2 infection, already don’t make sufficient numbers of some of the key protective microRNA, Isales says.

The microRNA present in the cells of our body typically target both the 3’-UTR (three prime untranslated region) region of the virus, the section of messenger RNA that contains regulatory regions that influence gene expression and protein function, as well as the coding region that ultimately produces a protein, unless they are outnumbered.

“Normally your immune cells would go in and destroy them but you have this large viral load as they continue to replicate and you have all this abrupt inflammatory response,” says Isales, which ultimately results in the cytokine storms that help destroy rather than protect organs. He thinks the reduced number of key microRNA critical to the body attacking the virus is an enabler of the disaster than can follow.

SARS, or severe acute respiratory syndrome, first surfaced in China and spread worldwide but while it was more deadly than the current coronavirus, it was not as infectious so less people ultimately died than are succumbing to COVID-19, Isales says. Worldwide, 8,098 people were infected with SARS and 774 died, according to the Centers for Disease Control and Prevention. Near the end of the first week of December, there were more than 14 million SARS-CoV-2 cases confirmed in the United States alone and more than 276,000 deaths.

People age 65 and older and people of any age with underlying medical conditions, are considered at higher risk for severe illness from COVID-19, according to the CDC. Underlying medical conditions include problems like serious heart conditions, chronic lung disease and moderate to severe asthma, and people with a compro-mised immune system such as individuals with cancer or who have had an organ transplant, the CDC says. Obesity, diabetes, chronic kidney disease requiring dialysis and liver disease are among the other conditions.

Other key collaborators on the study include Dr. Bikash Sahay, Department of Infectious Diseases and Immunology, University of Florida College of Veterinary Medicine in Gainesville, Florida; and Drs. Ashok Sharma and Tae Jin Lee from the MCG Center for Biotechnology and Genomic Medicine. The research was supported in part by the National Institutes of Health.