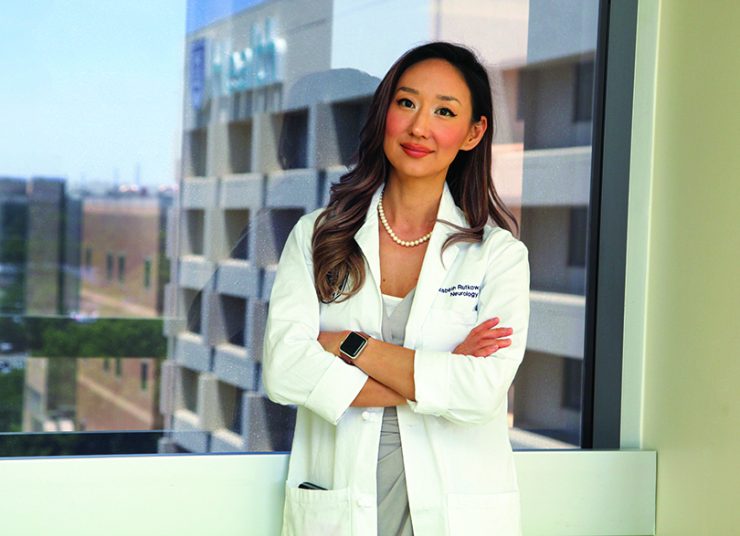 Medical College of Georgia neurologists are following more than 500 Georgians for five years to better assess the overall neurological impact of COVID-19.

The potential of the virus to impact the neurological system is clear in reports of slight increases in strokes, particularly in younger and middle-aged individuals, with COVID-19, and in the now familiar loss of taste and smell. There also are reports of brain involvement called encephalopathy, which may impact consciousness and cause confusion, as well as headaches and seizures.

Confusion, in fact, is a common problem neurologists are seeing in patients with COVID-19, but it’s hard to know in some patients whether that results from the fact that they are so sick and their oxygen levels are low or it’s a direct result of brain infection, says Dr. Elizabeth Rutkowski, neurologist with expertise in strokes and brain infections. In others, there is a clear case of a brain infection and of virus present in the spinal fluid.

MCG neurologists say long-term follow up is important to getting a clear picture of the impact of the virus-driven illness, and that in some pandemics, a viral or bacterial infection actually sets off a neurodegenerative condition that worsens with time. In the wake of the Spanish Flu Pandemic of 1918, for example, physicians were seeing immediate problems like delirium and encephalitis lethargica, which causes troubles like excessive sleepiness and movement problems, and — sometimes years later — a form of Parkinson’s.

“We could have the same thing happening here,” Dr. David Hess, stroke specialist and MCG Dean, says of the current pandemic.

This summer the investigators received $308,000 in emergency COVID-19 funding from the National Institutes of Health to enable the first year of the study and they are pursuing additional funding for subsequent years.

They are are looking at what happens to key indicators of neurological health like cognition, and the sense of smell in survivors over time, Rutkowski says. Participants are being asked to identify different smells like chocolate, bubble gum and root beer, for example, queries that will provide more objective measure of changes in the smell sense, Rutkowski says.

They are not only taking a more comprehensive look at what type of neurological effects the virus has, but also at whether there are risk factors like preexisting medical problems or gender— males are considered more at risk of dying from COVID — that make people more susceptible to those effects, Rutkowski says. Participants provide details like medications they are taking, demographics along with any COVID-19 related symptoms.

Study enrollees can participate in person at the AU Clinical Trials Office. Those who opt for participation provide blood samples within a month of diagnosis, then again at three and 12 months, then yearly. Blood is examined for markers of inflammation like cytokines and chemokines and genetic factors like changes in the ACE2 gene that may predispose to neurological problems. ACE2 — a pervasive enzyme found on cells in the lungs, heart, kidneys, intestines as well as the brain — is what the spiky SARS-CoV-2 latches onto to gain access inside cells and take over their machinery to help produce more virus. Blood also is examined for the presence and levels of antibodies against the virus, and antibodies against sugars coating the virus, both signs of an attack by the immune system.

Blood samples are being studied and stored at the MCG Center for Biotechnology and Genomic Medicine where Dr. Jin-Xiong She, center director, also is looking at variants in the ACE2 receptor that may make some individuals more vulnerable to neurological problems, as well as antibodies people are making to the natural sugar coating on the virus. She says the antibodies may provide a disease history and help determine whether the severity of symptoms is associated with certain antibodies.

The brain is a fairly direct target for the virus, which the Centers for Disease Control and Prevention says is mostly spread by human-to-human contact. When an infected individual coughs or sneezes in close proximity, a bystander’s nasal passageway becomes a way for the virus to first make its way through the olfactory bulb in the front of the brain, which picks up and processes odors detected by cells in the nasal cavity, then potentially to spread throughout the brain. The mouth affords a different route that can take the virus directly to the brain stem, and the neurologists say it’s likely the virus could take both routes in one person.

The direct access to the brain enables a sort of double attack, with a direct hit by the virus to an organ, like the lungs, as well as to the organ’s control centers in the brain. There are reports, Rutkowski notes, of patients seeming to do better but then they just stop breathing.

While she and Hess agree that it’s most often the lung failure that causes death with COVID-19, they suspect it’s both this direct lung invasion and infection of breathing centers in the brain responsible.

Other collaborators include Dr. John Morgan, director of the Parkinson’s Foundation Center of Excellence and Movement and Memory Disorder Programs in the MCG Department of Neurology, who is conducting cognitive testing; and Dr. Lynnette McCluskey, neurobiologist in the MCG Department of Neuroscience and Regenerative Medicine, who is coordinating smell and taste testing.