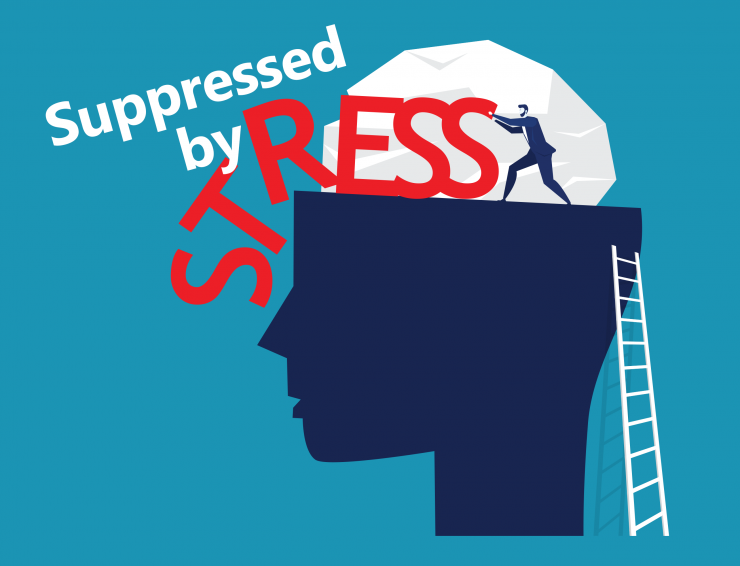 Our body is always about balance, and HCN1 is like a natural moderator in the hippocampus, our center of learning and memory.

HCN1 helps keep neuron activity and connectivity from getting excessive and communication from becoming garbled and disruptive, like what happens in a seizure.

Its levels are naturally high in the hippocampus, and neuroscientist Dr. Chung Sub Kim has evidence that even a single episode of significant stress can further increase HCN1 expression in the CA1 region of the hippocampus, which is critical to making, consolidating and retrieving memories, and push the excitability of neurons there down.

A few weeks of chronic stress pushes HCN1 expression way up and neuron excitability further down and appears to contribute to mental health pathology like depression and anxiety and PTSD.

A single, unforgettable life-changing event, like being the target of a sniper at a school shooting or a series of traumatic events like a tour of heavy combat duty, sexual assault or child sexual abuse, can result in long-term behavior changes, depression, nightmares, flashbacks, loss of interest in the things that normally provide pleasure, increased risk of substance abuse, suicide risk and more. The National Center for PTSD says that 7-8% of Americans will have PTSD at some point in their lives.

Back to balance, Kim wants to better understand how traumatic events induce PTSD and whether lowering HCN1 levels, or otherwise boosting the ability of our neurons to get excited and take action like making a memory, can restore resilience in people whose lives have been potentially permanently rocked.

“We don’t know the cellular mechanisms underlying developing PTSD, which is why there is no specific treatment,” Kim says. Existing therapies, like using serotonin reuptake inhibitors, the most commonly prescribed antidepressant, for example, help maybe 20-30% of individuals with PTSD, he says, noting that depression and PTSD most typically go hand in hand.

HCN1 is the most common form of the hyperpolarization-activated cyclic nucleotide-gated nonselective cation channels, or HCN channels. H-current is generated by these HCN channels and is referred to as a pacemaker current in neurons and heart cells alike, because it helps sustain their intrinsic, essential rhythm. Mutations in HCN1 are known to cause epilepsy, and if you completely block the channel you likely would lose interest in your usual activity and might see an increase in epileptic activity, he says.

Kim and his colleagues have shown that knocking out HCN1 in the CA1 region of the hippocampus reduces anxiety and depression behaviors in rats, changes associated with an increase in both neuron excitability and the synaptic activity that connects neurons and enables their communication and action.

They also reported in June 2020 in the journal Cell Press that one way just a single dose of ketamine, an anesthetic and pain reliever that gets misused as a “club drug,” may also produce a robust antidepressant effect is by reducing or preventing the current HCN1 generates. With tremendous side effects, including hallucinations, looming with ketamine and no Food
and Drug Administration approved drug to directly target HCN1, Kim is looking for a safe way to do that in a very specific region of the hippocampus.

More is not always better

He notes that by changing just a single ion channel in one area of the complex brain, it will yield a change in behavior, and he has evidence that a virus may help him do that.

Kim already has shown in a depression model, a properly armed virus can help restore more normal neuron excitability and other positive responses, like more activity in that specific brain region and more normal behavior.

Now he is pursuing novel studies to do the same in PTSD. His tools include using a virus that is activated by blue light using a brain research tool called optogenetics, which in this case includes taking advantage of the infecting skill of a common cold virus to seek and find the CA1 region of the hippocampus.

The virus expresses channelrhodopsin, a protein that enables light to control electrical excitability and other processes — including enabling algae to move in response to light — to help turn neuron excitability levels up toward normal.

He also is looking at a viral modality to directly knock HCN1 levels down, also to a more normal, pre-PTSD level, which also will ultimately turn up excitability. This approach targets expression of the HCN1 gene by disrupting its natural DNA pairing — how the DNA’s building blocks are supposed to stack up — so it cannot produce the HCN1 protein.

His models include both chronic social defeat, like a larger mouse usurping the authority of another, as well as a witness stress model, where a mouse who knows the previous hierarchy witnesses — rather than directly experiencing — the resulting aggression as the new boss takes over.

He also is looking further at what HCN channels are doing in the models of PTSD, what cellular mechanisms underlie the changes that occur and what happens to PTSD symptoms in the model when neuronal excitability and/or HCN channel expression are changed.

These studies will provide more insight into both susceptibility and resiliency to PTSD, Kim says, and whether lowering HCN1 levels and/or increasing neuron excitability can convert susceptibility into resilience.

Kim is a native of South Korea, a country of about 52 million people that is the geographic size of Dr. Frank Deak’s homeland Hungary but with more than five times its population. He earned a master’s of medical science degree from Yonsei University in Seoul then came to the United States for his PhD. He wanted to study at the University of Texas, Austin with Dr. Daniel Johnston, a world class expert in electrophysiology, who studies the cellular and molecular mechanisms of synaptic integration and long-term plasticity of neurons in areas of the brain, like the hippocampus. Kim worked his way into the Johnston lab and a PhD by starting as a lab technician who brought a different set of technical skills like immunostaining and biochemical assays. Johnston is now professor and director of the Institute for Neuroscience in the university’s College of Natural Sciences. Despite Kim’s significant determination, it wasn’t easy being in a new country where the work was highly complex and the language barrier significant, but Johnston often used the old adage with him: No pain, no gain. Those words still echo in Kim’s head as a motivator although he hasn’t used them yet in his own lab at MCG, where he is building a team that now includes postdoc Dr. Jiwon Kim and technician Talisha Davis. Kim also did his postdoctoral studies with Johnston in Texas, became a research associate in 2015 and moved to MCG in May 2020.