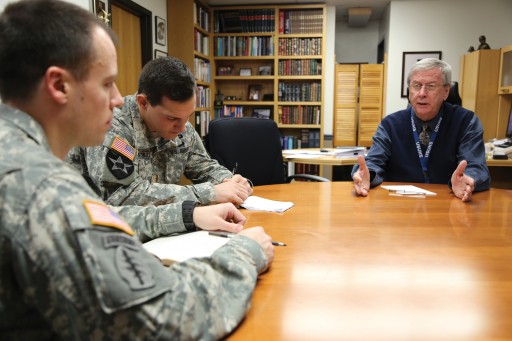 Considering that his original goal was to be a professional musician, Dr. Charles Rice is surprisingly pragmatic.

The characteristic has proved crucial at several pivotal points of his life – including when he forged his career path.

“I was going to be a professional French horn player,” says Rice (’68), who this year celebrates his 10th anniversary as President of the Uniformed Services University of the Health Sciences. “But my music professor told me that while my technique was fine, my tone in the high registers was a bit windy, so I was not going to take James Chambers’ place in the New York Philharmonic. I said, ‘OK, I’ll go to medical school.’”

Indeed, the instrument itself exemplifies his pragmatism. “I played the trumpet in high school, and when our French horn player graduated, the band director walked in and told me, ‘We need a French horn player. Do this.’ So I took up the horn and loved it.”

Of course, Rice couldn’t have succeeded in either plan B – the French horn or medical school – had he not possessed not only pragmatism and flexibility, but talent and tenacity. His cheerful willingness to change course on a dime required the ability to deliver. And deliver he did.

“My classmates probably voted me the least likely to succeed,” Rice says of medical school with trademark self-effacement, noting that he wasn’t a big fan of his freshman year. “I don’t think anybody likes the first year. But after that, it was great. The faculty were very inspiring.”

He was particularly intrigued by surgery, an interest that grew when he served in the U.S. Navy following medical school. “I saw a number of casualties returning from Vietnam, and I got very interested in trauma,” he says. “Critical care was just being recognized as a specialty, and I was fascinated by the physiology.”

After fulfilling his military commitment in 1977, he spent seven years overseeing the Intensive Care Unit at the now-defunct Michael Reese Hospital and Medical Center in Chicago, where he was also on the faculty of the University of Chicago. The environment was fertile ground not only for his clinical interests, but for his research pursuits, many of which were funded by the National Institutes of Health. Rice would go on to author or co-author more than 200 papers, chapters, and abstracts dealing chiefly with trauma.

“My colleagues and I researched the interaction between the endothelium (the tissue lining organs, including the lungs) and neutrophils (a type of white blood cell crucial to the immune system),” he says. “We identified a type of protein that causes neutrophils to stick to endothelial cells and inflict injuries on them after trauma. We developed a monoclonal antibody to block the process, an approach still being evaluated for use in ischemiareperfusion injury.”

He also worked with Dr. Charles Cochrane of the Scripps Clinic and Research Foundation in San Diego in elucidating the therapeutic benefits of surfactant, a substance that reduces surface tension in the lungs. But most gratifying to Rice was his emerging role as teacher. “My dad was a college professor at the University of Georgia; I come from a long line of teachers and professors, including my great-grandmother, who was Dean of Women at the University of North Carolina. I guess I just naturally gravitated toward it.”

Rice particularly revels in the challenge of distilling complex medical care to its most basic components. “I like helping students understand the underlying mechanisms of disease so that when they confront a problem they haven’t seen before, they can think it through,” says Rice. “There are a zillion facts to be known, but those are less important than knowing how to approach solving a problem.

“I take them back to the basics – the physiology, the pharmacology – and help them think through how to apply the knowledge in a clinical situation,” he continues. “The reward is seeing the lightbulb go off over their heads.”

Asked which role he prefers – teacher or physician – Rice responds, “I don’t see clinical medicine and education as separate issues. The practice of medicine is all about teaching – teaching students and residents, teaching patients, teaching families.”

The Intensive Care Unit also served as Exhibit A of Rice’s cooperative nature. “For me,” he says, “the key to survival in an ICU is creating a spirit of teamwork, mutual support, and inquiry. The focus always has to be on the patients, that you’re going to do the very best you know how to do to get them through their injury or illness.” That focus is jeopardized, he says, in a critical or intimidating environment. “I never wanted to hear a conversation in the ICU where blame was being assigned.”

He is gratified that his approach seems to have paid bountiful dividends – both short- and longterm. “A number of the students I taught pursued critical care, and I would like to believe it was at least in part because of spending time in the ICU I directed,” he says. “Former students will occasionally tell me that at the bedside, they’ll ask themselves, ‘What would Dr. Rice do?’ That gives me a great deal of pride and pleasure. It really makes it all worthwhile.”

Former patients often express their gratitude as well. For instance, while serving as Vice Chairman of the University of Washington School of Medicine Department of Surgery from 1985-92 after leaving Chicago, Rice had a patient who fractured a hip in an avalanche. “The hip got infected and had to be removed,” Rice says, “but the patient survived and went back to work with the [U.S. Department of Agriculture] Forest Service. He sent me a picture of his specially equipped helicopter that he could fly with just one leg. Then, a year later, I got a note that he had resumed kayaking.”

As Rice’s career progressed, his duties migrated increasingly toward administration. After leaving the University of Washington, he chaired the Division of General Surgery at the University of Texas Southwestern for a year, then moved back east as Vice Dean of the University of Illinois at Chicago College of Medicine. Soon thereafter, he was named the university’s Vice Chancellor for Health Affairs, a position he maintained until being named the Uniformed Services University’s fifth President in 2005.

His current position optimally utilizes the many skills he has cultivated – those in research, clinical care, education, administration, leadership, and – harkening back to the earliest days of his career – the military.

The Uniformed Services University, based in Bethesda, Maryland, was formed in 1972 to train health professionals, officers, and
leaders to support the military health system, the national security and national defense strategies, and the readiness of the U.S. armed forces.

“We’re basically the West Point [Military Academy] of the health sciences,” Rice says. Only about 40 percent of the university’s students have a prior connection to the military, but all commit to
seven years of military service after completing their training in exchange for their tuition being waived by the Department of Defense.

“Once they begin school, they’re in uniform every day,” Rice says. “A strong theme that runs through the curriculum, not just of the medical school but the entire university, is leadership. We expect our students to become the core of the military medical corps and the public health service. Certainly, the people who gravitate toward us have innate leadership instincts. We provide the tools and the ethos of leadership.”

The coursework “ensures they can succeed in any environment. In addition to  the regular curriculum, our students get 700 to 800 hours of military-specific education,” Rice said, citing classes and exercises in areas including battlefield care, epidemiology, disease prevention, and tropical medicine. Field sites include the Antietam National Battlefield, where the students wear load bearing gear to navigate six miles of countryside and set out for landmarks where faculty and Civil War re-enactors await.

The university’s campus is adjacent to the Walter Reed National Military Medical Center and across the street from the National Institutes of Health, enabling plentiful opportunities for clinical and research
experience.

Faculty and staff include both military personnel and civilians. All, Rice stressed, are accorded equal respect. “One of the messages those of us with gray hair impart to our students is, ‘Pay attention to the
non-commissioned officers. They will make you a better officer.’”

He is humbled by not only the dedication, but the camaraderie, of his student body. “In sharp contrast to my experience in other schools,” Rice says, “our students are so incredibly mutually supportive. They’re
going to be practicing together for years to come. Applicants are attracted to us by that phenomenon. That message comes through loud and clear: If you’ve got to be a solo performer, this is probably not the right place for you.”

“Our university is blessed with a superb Board of Regents and terrific Surgeons General, all of whom are ex officio members of the board,” he says. “I have really inspiring leaders.”

The feelings are mutual, to say the least. “The USU Board of Regents is, I believe, effective largely because Dr. Rice fosters communication with the board,” says Dr. Ronald R. Blanck, Chairman. “He listens, discusses, and keeps the board informed on the many issues he faces. The interactions between Dr. Rice and the board are the best I have seen and experienced. The credit for this clearly goes to Dr. Rice.”

When asked about his 10 years of service as President – a particularly long tenure in this day and age – Rice laughs that his superiors are too busy to give him the boot. And even after a decade, he still thoroughly enjoys the job. “I still get inspired by our students, our staff, what we’re doing. I’m not quite ready for retirement yet,” he says, citing recent accomplishments including recruiting new Deans of the F. Edward Hebert School of Medicine and the Daniel K. Inouye Graduate School of Nursing. “I’d like to be around to help them get their programs underway and provide them with the support they need.”

As for his spare time, Rice and his wife are enjoying an empty nest – one son is an organismal biologist at Cornell University, the other a Navy fighter pilot – and an active lifestyle. Rice’s hobbies include scuba diving and sailing. He jokes that he abandoned snow-skiing when his kids started leaving him in the dust. “I discovered the most terrifying words you can hear on the mountain are, ‘C’mon, Dad!’”

But he’s just as energetic on the job as ever and has never lost sight of what lured him away from the French horn in the first place: a love of serving others. “Medicine is fundamentally a human endeavor,” he says. “I think that’s a lesson I learned in Augusta.”