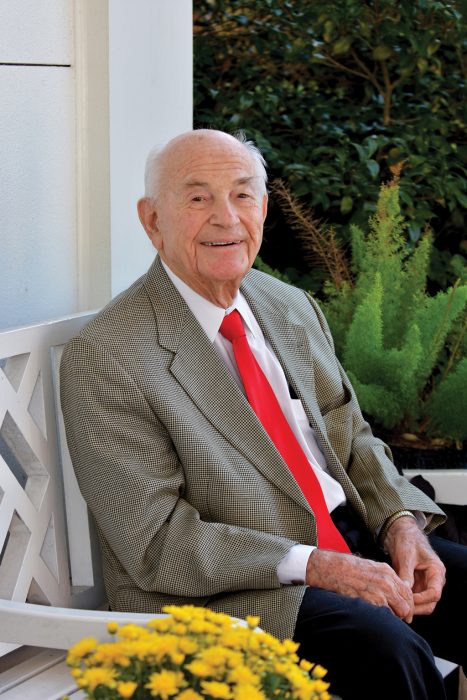 Dr. H. Gordon Davis came home to rural southwest Georgia to practice — and wants to encourage others to do the same.

A doctor was born Feb. 21, 1919, in Sylvester, Georgia, a mostly rural town on the outskirts of Albany. Of course, no one knew it then, but his mother promised it.

“When I was born, I weighed 15 pounds,” says Dr. H. Gordon Davis, a 1945 alumnus of the Medical College of Georgia. “My mother couldn’t walk for three months, and she made a promise to the Lord that, if he’d let her walk again, she’d make a doctor out of me.”

It wasn’t an easy promise for him to fulfill, he says, acknowledging that school was always a challenge for him. After graduating from high school, Davis went to work in the grocery store his father ran in their hometown. But he never forgot about the commitment his mother had made 18 years before.

“After about a year, I looked at my father one day and said, ‘Daddy, I’d like to go to college if you can afford it,’” Davis remembers. But he was one of Henry Gordon Davis Sr. and Lillian Davis’ seven children, and at the time, one brother was studying at Abraham Baldwin Agricultural College and another was at the University of Georgia. Finances were tight, but “Daddy looked at me and said, if you think you can do it, we’ll make it work.”

Determined, Davis decided to go to UGA. That fall, when his brother returned to Athens for his junior year of college, Davis packed his bags and went with him – without even bothering to apply. “I didn’t even know how to,” he says. “I just walked in [to

the registrar] and told them I was there to go to school. They had to call back [to Sylvester] to get my records and verify that I graduated high school.” He enrolled right then and there.

It was at UGA where he met Francis Salisbury, a pretty dietetics major one year his junior, and fell in love. But his mother’s promise remained on his mind throughout his four years in Athens, and he applied and was accepted to the state’s medical school nearly 100 miles away from Athens and from Francis. For a year, he’d take the bus to Athens to see her every Friday. And every Sunday, she’d drive him back in her ’29 Chevy. The two were married on Pearl Harbor Day – Dec. 7, 1941.

After graduating medical school and completing his training, Davis opened his family practice in Sylvester. It wasn’t enough for him to have fulfilled the promise of becoming a physician, he says. He wanted to — and always knew — he’d come back home to practice. As a family medicine physician in rural southwest Georgia, he spent long days doing everything from caesarian sections to hernia repairs, and those days often turned to nights, which he spent delivering babies.

Now Davis and his late wife Francis are helping to ensure the next generation will want to study and, hopefully, eventually practice in his tiny hometown and other places in southwest Georgia. The H. Gordon Davis Jr., MD and Francis S. Davis Scholarship Endowment Fund provides scholarships

for medical students from southwest Georgia who want to spend their third and/or fourth years of medical school at MCG’s Southwest Campus, based in Albany.

When the Davises returned to Sylvester, there were at least “four or five other hometown boys” who’d also gone to medical school and come back home to practice, he says. There aren’t many more than that now.

According to the Georgia Board for Physician Workforce, 14 physicians are practicing primary care in Worth County, where Sylvester is located. With a population of just over 21,000, that’s one for every 1,520 people. Yet they’re faring better than many of their neighbors. In a 2014 report, the Georgia Board warned that the physician shortage was most critical in rural areas, citing the fact that six Georgia counties have no family medicine doctors. Four of those – Quitman, Talbot, Taylor and Clay counties – are located in southwest Georgia. The numbers get scarier when counting rural areas with no specialists.

Davis says the scholarship is one way he wants to help change that. The idea, he says, is to encourage someone from a rural area to go into medicine with the idea of coming back home to practice, just like that little boy, born in 1919, who kept a promise to his mother.

“I did it,” he says proudly. “I want to show them that they can do it, too. I think they should want to come back.”

[su_note note_color=”#efefee” text_color=”#000000″ class=”story-side-box”]H. Gordon Davis Jr., MD Was married to Francis Salisbury Davis for 71 years before she died in 2013. They have four children, Henry Gordon Davis III, Francis Marion “Monie” Davis Moody, Margaret “Peggy” Davis Harris and Barbara “Babs” Jeanne Davis Alley. Served as chairman of the board of the MCG Foundation and president of the MCG Alumni Association. Was a charter member of the American Academy of Family Physicians and has served on the Georgia Chapter’s board of directors three times, including as president in 1977 and as chairman of the board in 1978. Was named Georgia Family Physician of the Year in 1982. Retired from practice in 1996.[/su_note]