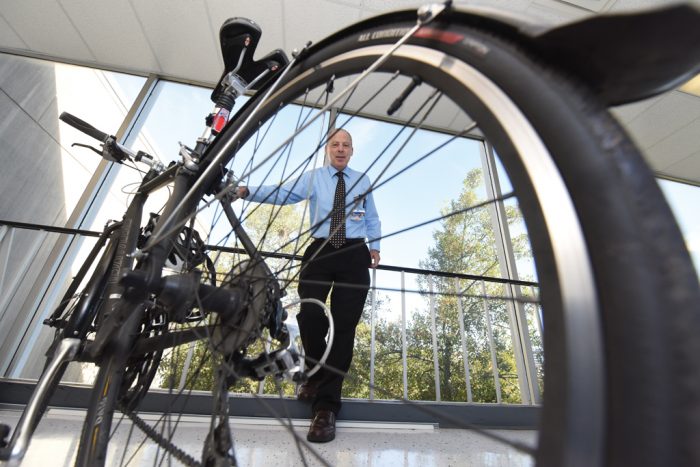 Cutting Obesity Down to Size

Every time Dr. Neal L. Weintraub glances up from his Augusta University desk, his eyes fall on the bicycle propped up in the corner.

“I bike to work every day, and I love it,” says Weintraub, interim chief of the Medical College of Georgia Division of Cardiology and Kupperman Eminent Scholar in Cardiovascular Medicine. “It’s exhilarating, and it’s great exercise. Just having it in my office reminds me of my commitment to my health.”

Weintraub shares the information not only to convey that he walks the walk, so to speak, when he counsels his patients to lead healthier lifestyles, but that he considers himself Exhibit A of a no-excuses approach to wellness. “A lot of my patients say they’re too busy to exercise, but I don’t know too many people who are busier than I am,” he says. 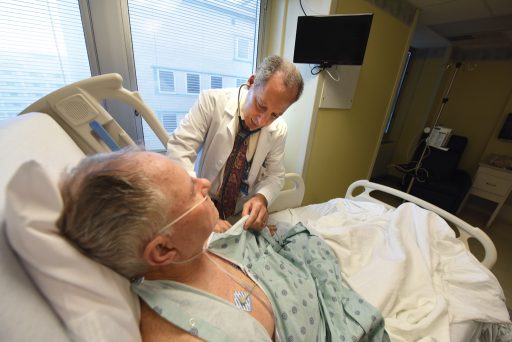 But make no mistake that although Weintraub cuts his cardiology patients little slack, he is also their staunchest advocate. His work at Augusta University includes optimizing the health not only of his own patients, but that of millions of people he will never meet.

He is advancing the latter goal by conducting research into the most minute components of an enormous problem: obesity. “The rates in this country are finally beginning to level off, but obesity is still a huge problem compared to where we were even 30 years ago,” Weintraub says, noting that fully two-thirds of adult Americans are overweight and the percentage of obese adolescents has quadrupled in a single generation. “We’ve recently had three women under age 30 present with heart attacks. This used to be unheard of, and obesity is the common denominator. We need to see obesity numbers declining, not just leveling off.”

Think you might be having a heart attack? Dr. Neal L. Weintraub advises you not to ignore the symptoms, even if you think you’re too young for the condition. Every second counts, he says, in minimizing damage to this vital organ. “The symptoms can mimic those of other conditions, but a heart attack shouldn’t be ruled out, no matter your age,” he says.

Says Weintraub, “In the cardiology world, we’ve been very effective at treating cardiovascular disease by targeting smoking and cholesterol levels. But we sort of hit a wall. I got interested in trying to understand the role of inflammation in atherosclerosis, which led me to the obesity epidemic.”

His research includes trying to improve the function of fat cells. The body harbors several kinds of fat cells: beige, which produce heat and serve as fuel; brown, which also produce heat but are uncommon in adults; and white, which are metabolically inactive and a huge contributor to cardiovascular disease. One of Weintraub’s studies, funded by a $1.8 million National Institutes of Health grant, involves prompting the body to produce more beige fat than white.

HDAC9 is a multifunctional protein and can’t be blocked altogether, “but we think it can be manipulated to improve metabolic function,” Weintraub says.

In search of the best way to manipulate the protein, he is studying the enzyme EZH2, which he suspects of letting HDAC9 run rampant in obesity. He is also deleting HDAC9 specifically from fat cells in hopes of improving their function.

His colleague, Dr. David Stepp, who holds the Charbonnier Chair in the MCG Department of Physiology, has amassed evidence suggesting that eliminating a key myokine, myostatin, improves metabolic health independent of obesity. “This holds proof of the principle that muscle health may hold the key,” Weintraub says. Techniques such as exercise, muscle stimulation and vibration show promise in improving metabolic health. 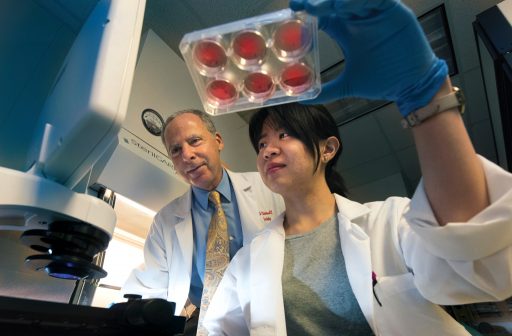 Weintraub is excited by the potential of the multipronged research, noting, “I don’t believe in a magic bullet. No pill will be a miracle cure making obesity better.”

And no treatment regimen will substitute for good judgment, he adds. “Once you gain weight, it’s very difficult to take it off and keep it off,” he says, citing the widespread physiological changes that prompt the body to retain metabolically inactive fat cells in preparation for famine. “Prevention is worth a pound of cure. I try to get people to think about small changes and small victories in this battle. Consider, for instance, that you can lose 5 pounds a year just by eliminating one cookie every day. That’s how finely tuned our bodies are to maintain their energy balance.”

Even if science can ultimately manipulate the metabolic activity of cells, he says, “consistent measures in diet and exercise are the most important things patients can do to lower the cardiovascular risk of obesity,” says Weintraub, who advocates not only regular exercise but a diet heavy in vegetables and healthy fats such as olive oil.

“There’s nothing we can do that will work better than that across the broad population.”