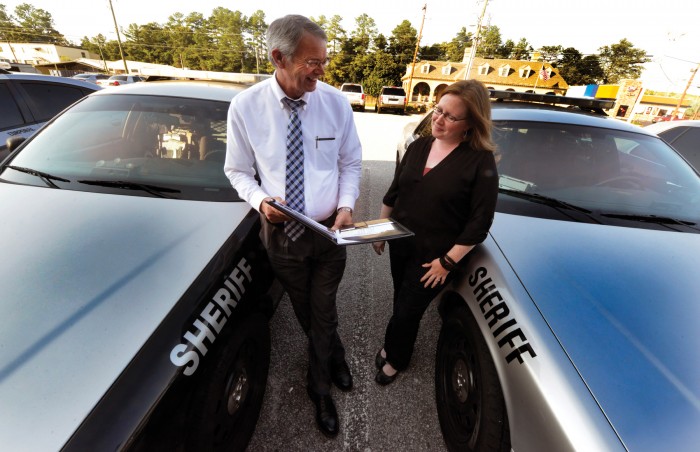 The Law of the Land

It may have been hard to imagine when the United States inaugurated its first African-American president almost eight years ago that convulsive racial unrest would soon follow.

The tinderbox ignited in the midst of several recent examples of law enforcement officers’ seemingly unequal treatment of African-American suspects or perpetrators. From the Michael Brown shooting in Ferguson, Missouri, to the apparent suicide of Sandra Bland after being pulled over and subsequently jailed for a minor traffic infraction, throngs of citizens of all races rose up in protest.

As Dr. Allison Foley watched the arrest videos and ensuing publicity along with the rest of the world, she realized just how topical her research was turning out to be.

It was around that time that the Richmond County Sheriff’s Office asked her to help design and implement a survey on citizen satisfaction with their law enforcers’ job performance. Foley, associate professor of criminal justice at Augusta University, eagerly took on the project, which gained more momentum after she received a Center for Undergraduate Research and Scholarship grant. The support from CURS, an Augusta University program incentivizing undergraduate participation in faculty research, enabled Foley to enlist three students to help her launch a pilot survey over the summer.

“The project initially was part of an internship program with the Richmond County Sheriff’s Office that we’d recently restarted,” explains Foley, an Oklahoma native who joined the faculty eight years ago. “This was in the works before Ferguson occurred. I view it as progressive, especially the desire of the Sheriff’s Office to survey people they’ve actually had contact with. They really wanted to find out how their officers are doing. I think that’s a bold sign.”

Says Maj. Scott Peebles of the Richmond County Sheriff’s Office, “A key tenant of Sheriff [Richard] Roundtree’s Community-Oriented Policing philosophy is collaboration with the community we serve. By partnering with Augusta University and Dr. Foley’s team, we’re not only building bridges with community stakeholders, but we’re also obtaining valuable feedback from community members we’ve had contact with. That feedback will be used to identify our areas of strength but, more importantly, will tell us where we need to seek improvement.”

Foley brainstormed with the undergraduates – Paxton Gordon, Austin Hendricks and Johnna Kelley – before embarking on the project, guiding them through the process of how to glean the most forthright feedback possible.

“It was important, because the Sheriff’s Office plans to use our findings both in training and monitoring their officers,” Foley says. “This research has real-world implications.”

Foley relished the opportunity to mentor the nascent researchers. “The students are paid through CURS stipends to work 20 hours a week for five weeks,” she says. “That’s a lot of time to spend together, and we all ended up getting along great. They really appreciated the opportunity to be involved in research from the very ground level. They knew this was an important partnership and an important service to the community.”

Foley learned from the students as well. “They know the online survey software tool better than I do right now,” she says with a laugh, noting the benefits of working with people who have been computer-literate since preschool.

She and the students started with the hypothesis that their respondents’ attitudes toward the Sheriff’s Office would be most heavily influenced by their most recent encounter with a law enforcement officer. The somewhat random nature of the pilot survey – it was distributed online to 86 people who responded to requests via social media and email to participate – meant that prior encounters with law enforcement wouldn’t be a given. But as it happened, nearly all the respondents did have experience with law enforcement officers, if only through, say, traffic violations. (The follow-up study will specifically target those known to have had experiences with Richmond County law enforcers.)

In assessing survey results, Foley and the students indeed uncovered demographic differences in perceptions of law enforcement. But somewhat unexpected findings materialized as well. “We certainly found that race has an impact,” Foley acknowledges. “And how safe the respondent perceived his own neighborhood to be had an impact. The safer you perceive your neighborhood, the more favorable your opinion tends to be of law enforcement. But by far the most significant predictors of attitude toward law enforcement – more significant even than personal encounters – was the respondent’s attitude toward American police overall.”

The sheriff’s office plans to use our findings in both training and monitoring their officers.

While understandable, Foley sympathizes with local law enforcers in dealing with the data. “It’s not particularly surprising, given that everyone is aware of Ferguson and other heavily publicized events,” she says, “but it goes to show that there’s only so much you can do at the local level.

What we’re saying is that the most influential factor of people’s attitudes toward your office is something that is quite out of your control. What does that mean for the way they train their officers and trying to build better relationships? They’ll have to be thinking about that and realize this is a really significant factor.”

On the other hand, survey responses also revealed much more manageable data – for instance, the finding that young women were more apt than others to feel patronized by police officers.
“There was more gender-related dissatisfaction than racial-related dissatisfaction,” Foley says. “But keep in mind that surveys tend to generate what you would expect with, say, online restaurant reviews: people either really happy or really unhappy are the ones more likely to respond. But overall, people are quite satisfied. They perceive Richmond County police officers to be professional and respectful.”

Foley stresses that these preliminary results only hint at what to expect from the larger study to come. “We constructed a survey we’re confident in, and we were happy with the response rate. So we’ve got a lot of good data,” she says. “But it’s only phase one. I’m excited to follow up in more depth. As an educator teaching about crime, it will really be enlightening for me. It’s a way of reaching people in the community with whom we might not normally interact.”

She notes that the experience is also making the researchers feel more invested in their community. “I do honestly feel a lot more entrenched and grounded in the area than I did before,” Foley says. “Survey respondents are sharing personal stories with us, after all. And this will be really beneficial for my students pursuing law enforcement careers.”

Kelley, one of her undergraduate researchers, stresses that students pursuing other majors will find the research enlightening as well. “I’m a psychology major, but I really enjoyed learning not only more about research in general, but more about sociology and criminal justice,” she says. “I’ll be applying to graduate schools soon, so I value the opportunity to participate in research projects like this that allow me to learn by working hands on. Dr. Foley is a great teacher, and I look forward to continuing work on this project.”

The citizens themselves, Foley feels, will be the biggest beneficiaries, particularly considering the Richmond County Sheriff’s Office’s willingness to fully embrace the findings in the hopes of serving the community as effectively as possible. “The faith people place in law enforcement is of huge significance,” Foley says. “If they don’t trust the police, they not only are going to be at higher risk for victimization – for instance, because of their reluctance to call for help or report suspicious activity – but they’re going to feel at higher risk.”

Says Foley, “Hopefully, we can find out where the weaknesses are and provide law enforcement a way of enhancing satisfaction.”

Getting the Lead Out