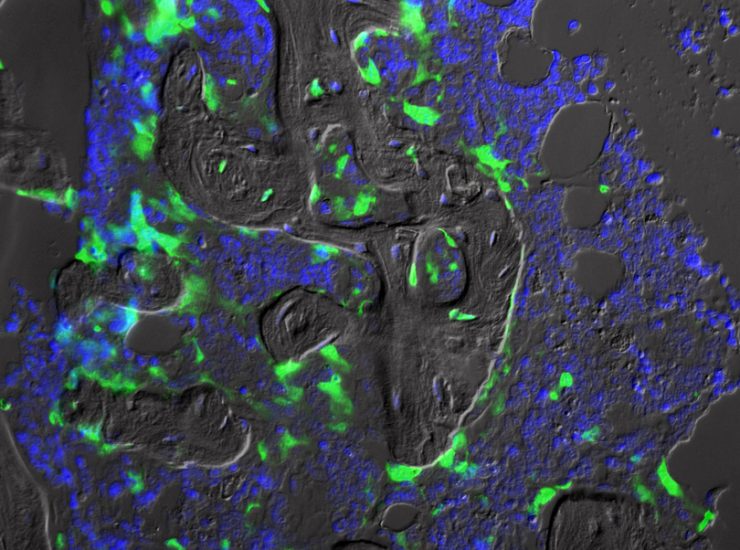 Through the Scope: Down to the Marrow

Dr. William Hill, professor of cellular biology and anatomy in the Medical College of Georgia, is a member of a research group studying the role adult stem cells can play in repairing damage done by strokes to the central nervous system. He’s also part of the college’s Institute of Regenerative Medicine, exploring ways to help replace bone lost during aging, and mobilize and target stem cells to help repair different injuries.

What do these two pursuits have in common? Bone marrow.

“If you have a bone marrow transplant, which is done to treat leukemia or sickle cell anemia, the HSCs that give rise to red blood cells, which carry oxygen, and all of the white blood cells, which are part of the immune system, transplant and grow well; however, the MSCs do not,” Hill said. “What’s always been a big challenge is trying to transplant MSCs.”

What’s worse is that as we age, we’re also losing MSCs. It’s a big problem, but not an insurmountable one. More than 10 years ago, Hill and his colleagues began looking for ways to engraft and track MSCs in mice. The results speak for themselves.

“When we put these stem cells in the mouse’s marrow and have them engraft, we increase the amount of new bone formed, even in old mice,” he said.

The trick is streamlining the process, accomplished by guiding the MSCs where they’re needed most. MSCs are notoriously difficult to identify and track, though.

To combat this, he and his team use green fluorescence protein (GFP), a modified protein produced by the Aequorea victoria jellyfish, to label the MSCs. The photo (left) shows a mouse bone treated with radiation to remove existing stem cells. Hill and his team injected MSCs labeled with GFP (green) directly into the bone marrow space to bypass the stem cells’ homing mechanisms and treated them with the chemokine protein SDF-1 to help them engraft and survive in the marrow.

“Where you see green are the transplanted cells,” Hill said. “We know they transplanted and started doing one of their normal functions because they formed new bone. Importantly, we can also follow them when they leave the bone marrow to help in repair processes throughout the body.”

Mine the Past: On the Shoulders of Giants