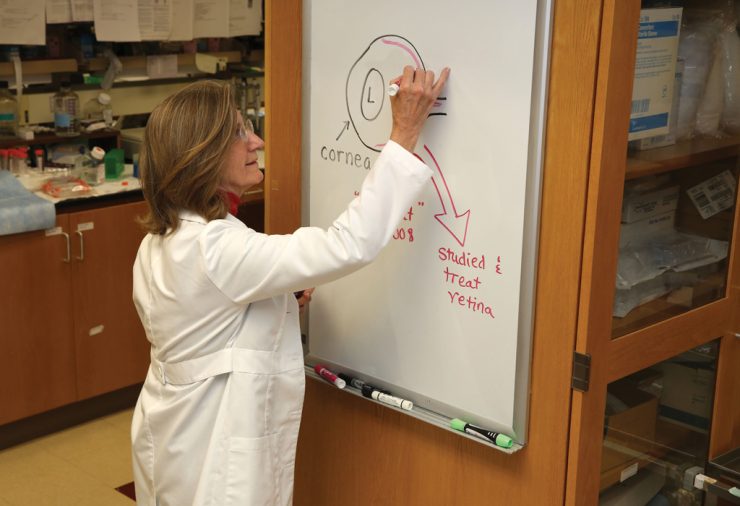 Ask Dr. Sylvia Smith, professor and chair of cellular biology and anatomy at the Medical College of Georgia and co-director of the James and Jean Culver Vision Discovery Institute, about the vision institute’s creation, and she’ll likely pull out a piece of paper. She’s one of those people who likes to sketch things out for you, and in this case, she’ll draw you an eyeball.

And when she says that’s how the vision institute is divided, she’s not kidding. At their first organizational retreat in 2008, the faculty  ­— both clinicians and researchers ­— self-organized into these two areas. The interest at that first retreat in forming an active vision research group was overwhelming, and it solidified the concept first put forth by Dr. Julian Nussbaum, chair of ophthalmology, who saw an opportunity to galvanize the institution’s fragmented group of clinicians and eye researchers through the creation of a discovery institute.  Now, 10 years later, “we have great communication and collaboration between clinicians and basic scientists,” Smith says.

Initial funding to help support the university’s discovery institutes got things up and running, and that good start was boosted by an endowment from Dr. James Culver, an MCG grad who, among other things in his storied career, administered eye exams to the first astronauts. These gifts and awards, combined with other philanthropy, have enabled the Culver VDI to establish a pipeline of grant success, where researchers from all areas of study and practice — and in all stages of their careers — are winning grant awards.

Currently, 12 investigators have research supported by the National Eye Institute (NEI), one of the National Institutes of Health, and two others are eagerly awaiting a decision by the NEI.

“They obtain funding which enhances their own expertise and yields a great research ‘product,’ then they give back to the group and train others,” Smith says of the researchers.

While Smith certainly appreciates the environment she’s helped create, it’s only when she hears the admiration frequently expressed by visiting speakers that she realizes how unique it really is.

“Visiting scientists and clinicians tell me that we have a real treasure here, and I believe them” she says. “We have an environment that truly supports vision research.”

How it Works: Helping the Body Help Itself