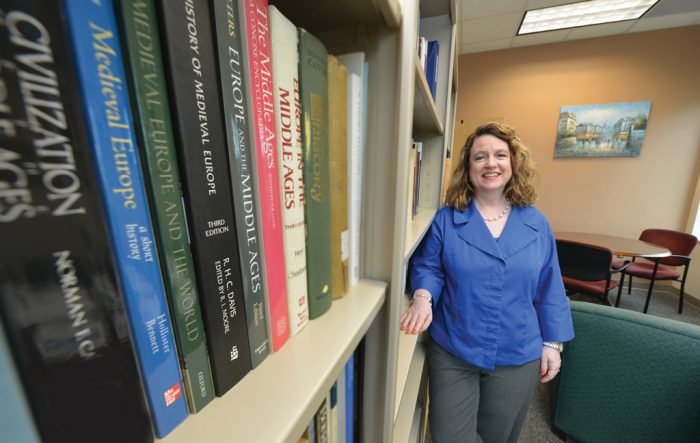 Mine the Past: Everything Old is New

Last year, John Hinckley Jr. was released from a psychiatric hospital and allowed to return home, 35 years after he was found not guilty by reason of insanity for attempting to assassinate President Ronald Reagan.

The “not guilty” verdict caused a national outcry and resulted in changes to both state and federal laws. Many states began offering an alternate verdict, “guilty but mentally ill.”

A recent article of Turner’s, “Unpunishable? The Insanity Defense in Medieval English Law,” explores the legal standing of the impaired, particularly the insanity defense.

“It’s interesting, because in the Middle Ages, juries found the mentally ill guilty but unpunishable for their mental illness,” Turner said. “So, we’ve returned to what they did in the Middle Ages. In medieval England, people would be found guilty, but punishment would be suspended or a lighter sentence would be given.”

Turner is interested in the intersection between law and medicine, and her research specialty is medieval forensic mental health.

“I have spent a lot of time looking at medieval mental health because it gives me an access way into looking at how people, both good and bad, are treated,” Turner said. “Why do we treat certain people the way we do? Specifically, the poor and those who are ill-equipped to navigate the legal terrain, who become fodder for those who want to both help and hurt.”

Originally interested in the history of ethics, Turner wanted to examine the distinction between ethically good and bad actions. A specialist in medieval Britain, Turner found herself researching ethics through the lens of mental health.

“I like to look at things that people are currently doing,” she said. “As humans, we haven’t changed much in 1,000 years. We might have better, more sophisticated ways of talking about mental conditions, and we have laws in place, but we still continue down the path of questioning right versus wrong.”

Similarly, Turner has become curious about the legal standing of the impaired. When does someone cross the line between impaired and disabled?

“These are questions people are asking today,” Turner said. “But people also asked these questions in the past.”

“I just finished my fifth book on mental health, and I have written numerous articles,” she said. “So, I proved them wrong.”

Turner’s most recent article, “The Leper and the Prostitute: Forensic Examination in Medieval England,” was published as part of a book of collected works titled Trauma in Medieval Life.

On the Edge: Shaping Global Conversation