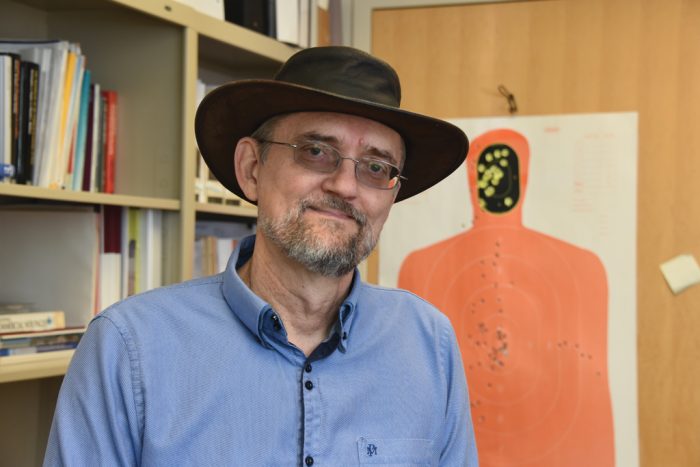 On the Edge: Shaping Global Conversation

Dr. Jurgen Brauer, professor of economics in the James M. Hull College of Business, is a man of peace with a mind for guns and money.

Through his research, he hopes to help shape global conversations about the cost of violence.

Working with colleagues from across the world, he has raised and addressed a number of questions regarding the use and abuse of firearms. While inherently controversial, his work focuses not on the culture of politics of firearms, but rather on the business and economics of the firearms industry.

“The U.S. firearms industry is exceedingly small — roughly $6.1 billion on the supply end compared to the total $16,000 billion U.S. economy — yet it wields incommensurate influence in the political and cultural discussions in this country,” Brauer said.

In a recent study published in the Journal of Economic Geography (Nov. 2016, Vol. 16, Issue 6), he and co-authors Drs. Elisa Trujillo-Baute and Daniel Montolio of the University of Barcelona studied the effect of changes in U.S. state firearms laws on the location of nearly 3,000 U.S. firearms manufacturers from 1986 to 2010. The study was a direct response to the most common threat among firearms manufacturers: to leave states with strict gun laws in favor of more “gun-friendly” locales.

Brauer’s team found that while changes in state firearms laws do matter, so too do a number of other factors, including wage rates and unionization.

“The study suggested firearms manufacturers’ implicit or explicit threats to move were a bit on the brash side … states could probably call the bluff on at least some of them without companies actually packing up and moving across state lines,” Brauer said.

Brauer has since started another firearms-related project addressing the demand side of the market.

Through his groundbreaking research into forecasting, Brauer said he hopes to draw interest from both sides of the political-cultural debate and foster further conversation in the future.