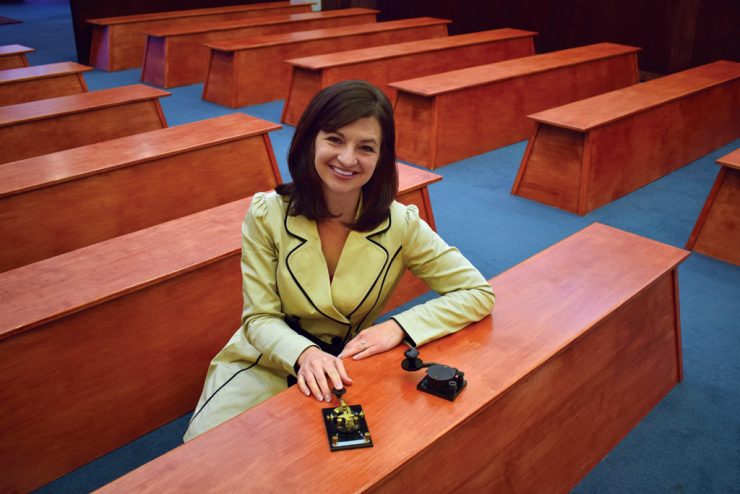 Mine the Past: Dots and Dashes, Zeros and Ones

If you think exploiting the anonymity of faceless communication is unique to the Internet Age, think again.

Dr. Christina Henderson Harner, assistant professor in the Department of English and Foreign Languages, has plunged headlong into the little-known world of telegraph fiction, a genre that developed around the mid- to late 19th century, first as fiction by telegraph operators for telegraph operators and later as a short-lived but nevertheless important slice of mainstream fiction.

For writers of the genre, particularly women, it provided a way to give voice to new social norms that were developing in the workplace; for readers, it helped shift the concept that working was something incompatible with the notion of what it meant to be an ideal woman and for 21st-century researchers, it provides a more realistic — and less moralistic — view of this new role for working women.

And more freedom meant more opportunities. Financial freedom at the time meant women didn’t have to consider marriage as a means of survival, and the independence that came as a result of that also meant more romantic options because they were talking to people they might not otherwise have access to, which was a powerful element of social change while also providing some of the genre’s more entertaining qualities — the mistaken identities and romantic high jinks that can grow from blind conversations.

You’ve Got Mail, the popular Tom Hanks/Meg Ryan romantic comedy, is basically the cyber age version of telegraph fiction, with the same issues surrounding the question of romantic attraction stemming from a blind emotional or intellectual connection.

“It’s a perpetual question we have — what difference does the medium of communication make in how we form relationships?” Henderson Harner says. “And they were thinking about it in such interesting ways.”

Like
Like Love Haha Wow Sad Angry
Christina Henderson Harner Department of English and Foreign Language Mine the Past
Share your story
Our best stories often come from suggestions from the campus community.
Submit News

Looking Down the Road