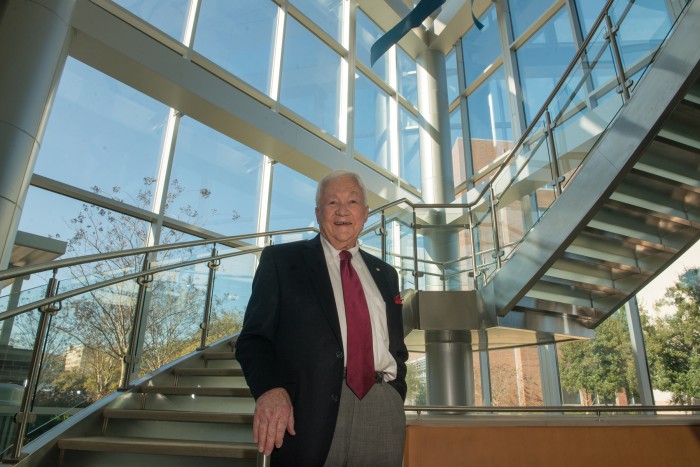 THE CANCER RESEARCH building at Augusta University is getting a larger footprint and a new name.

The 170,000-square-foot facility on the corner of Laney Walker and R.A. Dent boulevards will gain 72,000 square feet of new space and undergo 6,000 square feet of renovations to become the M. Bert Storey Research Building, in recognition of the Augusta philanthropist and longtime university supporter.

“This $62.5 million project will be a significant expansion for the Cancer Center that will physically connect our clinical and research missions as we continue the momentum toward National Cancer Institute designation,” said Augusta University President Brooks Keel. “We couldn’t make this happen without the generosity of supporters like M. Bert Storey, who understand the impact that our discoveries make in the fight against cancer.”

The state of Georgia is providing $50 million in bond funding, and the university is securing the remaining funds to finance a five-story expansion to the existing research building and an elevated connector linking the building to Cancer Center Outpatient Services. The naming was approved by the University System of Georgia Board of Regents on Aug. 12.
“It is my honor to lend my name to such a worthy endeavor,” said Storey, president and owner of Bert Storey Associates LLC, a commercial real estate development company, and chairman of the Storey Foundation. Storey also helped raise funds for Augusta’s Kroc Center and serves as an Augusta University fundraising campaign cabinet member. He and son Barry received the 2010 Outstanding Philanthropist Award from the Greater Augusta Chapter of the Association of Fundraising Professionals.

The gene and hormone soup that enables women to breastfeed can be a recipe for breast cancer, particularly when the first pregnancy is after age 30.

Researchers have found that the gene DNMT1 is not only essential in maintaining stem cells that enable normal rapid breast growth during pregnancy, but that the gene is highly expressed in the most common types of breast cancer.

Conversely, ISL1 gene, a tumor suppressor and natural control mechanism for stem cells, is nearly silent in the breasts during pregnancy as well as cancer, said Dr. Muthusamy Thangaraju, an MCG biochemist and corresponding author of the study in the journal Nature Communications.

“DNMT1 directly regulates ISL1,” Thangaraju said. “If the DNMT1 expression is high, this ISL1 gene is low.” They first made the connection when they eliminated DNMT1 in a mouse and noted the increase in ISL1. Then they got busy looking at what happened in human breast cancer cells.

They found that restoring higher levels of ISL1 to human breast cancer cells dramatically reduces stem cells and the resulting cell growth and spread that are hallmarks of cancer. The finding points toward new therapeutic targets for breast cancer and potentially using blood levels of ISL1 to diagnose early breast cancer. In fact, the researchers have found that the anti-seizure medication valproic acid, already used with chemotherapy to treat breast cancer, appears to increase ISL1 expression. The scientists are screening other small molecules that might work as well or better.

DNA damage increases the risk of cancer, and researchers have found that a protein that assists stressed cells plays a critical step in
its repair.

ATF3, or activating transcription factor 3, appears to increase its levels in the face of cell stress, then bind to another protein, Tip60, to attract a swarm of other proteins to the
damage site.

“When a cell senses stress, such as DNA damage, this protein can be induced,” said Dr. Chunhong Yan, an MCG molecular biologist and corresponding author of the study published in the journal Nature Communications. “One of the things we found is that ATF3 can bind to the Tip60 protein and promote the DNA damage repair function.”

Like Tip60, ATF3 is expressed at low levels until cells get stressed, and DNA mutation is one of the most common cell stressors. ATF3 then finds and binds to Tip60, increasing the usually unstable protein’s stability and level of expression. “If you look at the DNA under the microscope, you will see the damage site somehow labeled by this protein,” Yan said. Tip60, in turn, modifies the protein ATM, helping it form a sort of scaffold where other worker-bee proteins soon assemble.

While it may take years for a cell to recognize DNA damage, once it does, the response occurs within minutes. One of the early arrivals to the ATM scaffold is p53, a powerful tumor suppressor. Once on the scene, p53 helps assess whether the damage is reparable. If not, it triggers cell suicide. If the damage is fixable,
it will arrest cell proliferation and help start
the repair.

In human cancer cells, the researchers have shown that ATF3’s role precedes previously known steps. Future studies include finding a drug that could help cells make even more of this stress responder as a possible adjunct cancer therapy. The research was funded by the National Institutes of Health. Dr. Hongmei Cui, a postdoctoral fellow, is the study’s first author.

Fire in the Belly

Augusta University is among 15 institutions in the nation to receive federal funding to help train the next generation of physician-scientists in obstetrics and gynecology.

The university will receive $1.7 million over the next five years from the National Institutes of Health’s Eunice Kennedy Shriver National Institute of Child Health and Human Development to train obstetrician-gynecologists to also become independent investigators in women’s health fields.

“We want individuals with fire in their belly to be able to get involved in research,” said Dr. Michael P. Diamond, chairman of the Medical College of Georgia Department of Obstetrics and Gynecology, Augusta University senior vice president for research and principal investigator for the new program in Augusta. “It’s a great opportunity to train clinicians to be clinical investigators.”

The program is available for junior faculty as well as residents and fellows who have completed training at locations across the nation or at MCG. The program funds two positions at a time for a maximum of five years in Augusta. Federal dollars will help support the salaries and the research of the program scholars.

Having committed time for research is difficult for physicians, particularly more junior physicians trying to juggle building a practice and a solid research program, Diamond said. The federal grant enables the physicians to focus on research at least 30 hours weekly.

“We want to be known for cyber,” said Joanne Sexton, director for Augusta University Cyber Security Educational Initiatives. “The Augusta area has been growing in this aspect, and we want to be a major player in that.”

The Cyber Institute has already established a cyber curriculum, said Dr. Gretchen Caughman, executive vice president for academic affairs and provost, complementing nearby Fort Gordon’s new role as headquarters for the U.S. Army Cyber Command. “We have made cybersecurity a major strategic priority,” Caughman said, citing funding from the University System of Georgia. The institute also advances the goal of recognition as a Department of Homeland Security and National Security Agency National Center of Academic Excellence in Information Assurance/Cyber Defense.

The institute will provide the framework for all things cyber at the university, in cooperation with several of Augusta University’s colleges, which offer cybersecurity courses and degrees.