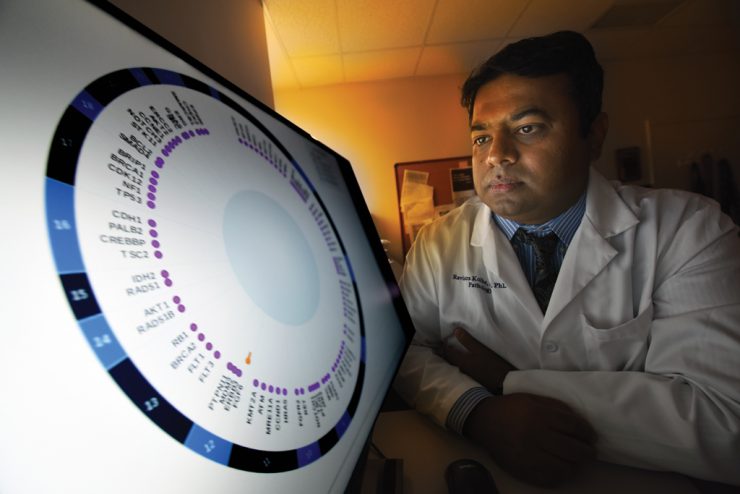 On the Edge: Tested Precision

One of Dr. Ravindra Kolhe’s lifelong dreams was to develop a test able to have a comprehensive look at DNA and RNA in one investigative procedure, and after two and a half years of work and an arduous evaluation process, the breast and molecular pathologist did it. But when he presented his test, which allows analysis of 170 genes associated with more than 14 different solid tumors, to a 2017 meeting of the Association of Molecular Pathologists, he encountered skepticism.

“No one in the room could believe it,” says Kolhe, who is also director of the Georgia Esoteric and Molecular Laboratory and an associate professor at the Medical College of Georgia. “They thought it was difficult to achieve.”

Once researchers came to Augusta University and visited his lab, however, they realized the data was good, and now 25 different labs all over the world are trying to replicate the test.

Not only is the test finding its way into labs around the world, it’s enabled Augusta University to be a part of the National Cancer Institute-initiated Molecular Analysis for Therapy Choice (MATCH) trial, a nationwide precision medicine cancer treatment trial that treats cancer based on genetic changes found in the tumors rather than by organ, which has been the treatment standard for years.

“We’re treating what’s driving these tumors rather than what organ it’s coming from,” he says.

Being one of seven academic institutions across the nation to have a MATCH-designated lab not only vaults Augusta University high onto the national stage, but it gives cancer patients access to the most up-to-date genomic cancer treatment options available — at no cost to them.

“I think this is the way we’re going forward with personalized oncology,” Kolhe says. “The beauty of the test is that it can even tell you what percentage of the tumor has a particular mutation, so if it’s 5 percent of one mutation and 85 percent of another mutation, we know exactly what drug the patient needs to kill not only the 5 percent or the 85 percent, but the full 90 percent.”