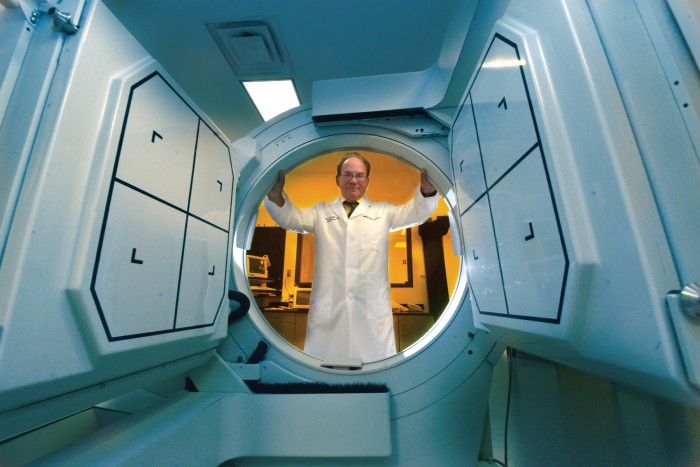 Getting the Lead Out

If you’ve ever rushed to the emergency room with the tell-tale chest pain that might signal a heart attack, you’re likely familiar with the extensive technological innovations available to immeasurably improve your odds of survival.

Patients in technologically advanced hospitals such as the medical center at Augusta University have largely grown inured to such state-of-the-art equipment. But the people treating the patients and operating the equipment don’t take it for granted for a second. They maintain immense respect for the resources that aid in diagnosis and treatment – and they’re always on the lookout for improvements.

And Augusta University faculty members occasionally create those improvements themselves.
This has been the case for the past three years as Dr. Gregory Passmore, professor of medical laboratory, imaging and radiological sciences in the College of Allied Health Sciences, has sought to improve one of cardiology’s foremost diagnostic tools.

“In nuclear cardiology, we use a device called a collimator to image the myocardium, looking for perfusion (the body’s delivery of blood) in heart tissue, particularly the left ventricle,” says Passmore.

The device is a small fixed telescope that produces a parallel beam of radiation. Traditionally, a collimator has used an isotope called thallium 201 to determine whether arteries are blocked. If so, the heart’s blood supply is being choked off, imperiling both the heart and life itself. More recently, an isotope called technetium 99m has served as an alternative to thallium.

“There are advantages and disadvantages to each,” Passmore says. “Thallium shows both where the artery is blocked and the health of the muscle tissue around the blockage. If you’ve had a heart attack, you’ll see scar tissue there. If the tissue hasn’t died yet, you can restore blood flow and revive it.”

One technological advance has been to combine the protocols, but the solution is problematic. “You can use them together, but you can’t image them at the same time,” Passmore says. “This requires taking two sets of images, which can be hard on patients.”
Nonetheless, technicians have made the best of it, opting for one of three different protocols, depending on the circumstances.

Technetium is a vital element in imaging technology, but it’s in short supply.

“We have to import it from other countries,” says Dr. Gregory Passmore, professor of medical laboratory, imaging and radiological sciences, “and problems internationally have greatly curtailed the supply. The problem has been somewhat abated by minimal domestic production, but it hasn’t been sufficient for [imaging specialists’] needs.” But the fact that domestic molybdenum is available at all is in large part due to the efforts of Passmore, his colleagues and . . . improbably enough . . . a dentist.

His longtime dentist happened to be Dr. Charlie Norwood, who went on to serve in the U.S. Congress from 1995 until his death in 2007. Augusta’s Charlie Norwood Department of Veterans Affairs Medical Center is named in his honor. Norwood, whose dentistry background gave him a tremendous appreciation of imaging technology in health care, championed legislation enabling molybdenum production domestically.

In the first, the patient walks on a treadmill, then is injected with thallium so technicians can capture images on the gamma camera (the collimator). The patient returns four hours later for more images so the technicians can compare the images of a stressed heart with those of the heart at rest. “If the images reveal no blockage during rest but reveal blockage during stress, you probably have some plaque buildup,” Passmore says. “A little plaque at rest is generally asymptomatic. But if you start to exercise, the blockage noticeably expands. That’s when people feel pain in the chest, called angina.” Untreated, of course, the angina can result in a heart attack.

The third protocol combines the procedures, requiring patients to lie very still in identical positions for each set of images. “We tried injecting the isotopes simultaneously with just one set of images,” Passmore says, “but we realized we had problems with downscatter (the higher-resolution images of technetium scattering down to the area being evaluated). Doing the images separately is hard on patients,” says Passmore, and it exacerbates a nationwide shortage of technetium. (See page 19.)

The dilemma got Passmore thinking that maybe rather than targeting the isotopes for improvement, the collimator itself could be improved. “The collimator camera is made of lead,” he explains. “Without the lead, it’s like a camera that can’t focus. The camera would provide a lot of information, but we wouldn’t be able to interpret it. I thought, ‘If the lead is causing the problem, why not find another material?’”

He has used grants from the Center for Undergraduate Research and Scholarship to do just that. The center provides funding for Augusta University research projects incorporating undergraduates as research assistants. The funding includes stipends for the undergraduates, who commit to five weeks of summer work advancing faculty research. For the past three summers, CURS funding has enabled Augusta University students to assist Passmore with his studies. This past summer, students Kingsley Anosike, Nathan Gaffney and Richard Stahman participated.

“The students and I tested six different materials as potential replacements for the lead,” Passmore says. “For each material, we looked at the characteristics of attenuation (the percentage of radiation removed because of its interaction with the material). Five of the six materials we studied worked very well in essentially moving the scatter photon out of the imaging window. Tungsten in particular seems to have the most promise. It maintains the attenuating characteristics of lead but without the scatter characteristics.”

Of course, tungsten has disadvantages of its own. “Almost any material is more expensive than lead, including tungsten,” Passmore says. “But other elements, including those used mostly in computer circuit boards, worked well too and are less expensive. Using them for collimators would initially be expensive, but once under production, the costs should be reasonable.”

He has presented his findings regionally, statewide and nationwide. “Radiologists have told me the research is very promising and could also be a good substitute for PET (positron emission tomography) scanners, which aren’t necessarily available in some hospitals and which are hard to use on cancer patients with diabetes,” Passmore says.

His next step is to fabricate an imaging model using one or more of the effective elements he tested, then try to interest manufacturers in mass-producing it. “I’m getting estimates now,” Passmore says.

A leap forward in imaging technology made possible largely by the efforts of undergraduates? Passmore notes that this is the beauty of the CURS program. “It’s been wonderful for me to be able to utilize these students,” he says. “The grants gave them the opportunity to participate in research and enabled me to flesh out my ideas.”