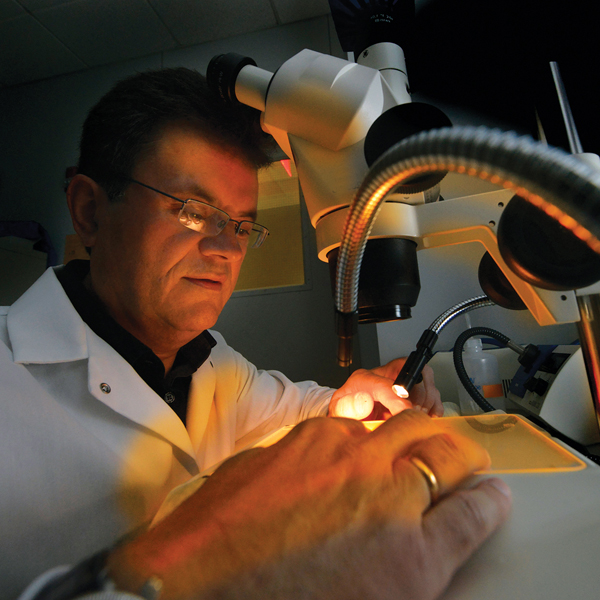 HEPATITIS, alcohol consumption, and obesity can produce chronic inflammation in the liver and set the stage for cancer.

SCIENTISTS have targeted the culprit as the protein TREM-1, which accelerates inflammation.

“This kind of inflammation is very subtle; the body doesn’t even show signs of a high fever, as it would with an acute infection such as the flu. But [the inflammation] provides advantages for mutated cells to avoid the immune response and become cancer.”

Horuzsko and his team have a $1.6 million National Cancer Institute grant to determine whether bringing down the curtain on TREM- 1 blocks liver cancer development and possibly other inflammationassociated cancers such as colorectal, lung, and cervical cancer. Their early evidence in human cells and animal models suggests that it can block the conversion that can take decades to occur and even stop progression of an existing cancer.

TREM-1 is expressed by three immune cell types – neutrophils, monocytes, and macrophages – but not normally by healthy liver cells. In the liver, TREM-1 can be found in Kupffer cells, a resident macrophage that’s basically a cellular garbage disposal, devouring debris, invaders, and even cancer cells.

Another protein, HMGB1, which has important functions inside the cell nucleus such as keeping DNA organized, is released by cells that are damaged and dying from years of exposure to chronic inflammation. Horuzsko has found that when released, HMGB1 activates the previously quiescent TREM-1 in the Kupffer cells. The resulting amplified inflammation promotes production of more liver cells to replace the dead and dying, but the new cells are mutated and cancer-prone. TREM-1 then appears to continue supporting inflammation and preventing dangerous new cells from dying.

While a healthy individual could likely eliminate a few wayward cells, in those with a chronically stressed liver, “it’s like throwing gasoline on a fire,” Horuzsko said. “Inflammatory cells from other parts of the body migrate to the liver, so it moves to a state of chronic inflammation, which increases the cancer risk because it increases liver cell damage.”

THE CHRONIC assaults produce scar-like tissue that replaces healthy liver tissue, potentially resulting in fibrosis and cirrhosis – advanced states of liver disease often associated with alcohol, but which can also be caused by other perpetrators of ongoing inflammation, such as obesity and hepatitis. This damaged state again is highly favorable to liver cancer. “It’s a step-by-step process that cantake 10 or 20 years,” Horuzsko said.

He thinks one way TREM-1 supports scar tissue formation is by activating stellate cells, which also tend to stay dormant unless a liver injury, such as from a car wreck, requires repair.

Horuzsko’s team has shown that exposure to a known carcinogen essentially always causes liver cancer in mice, and those cancer cells contain TREM-1. Mice deficient in TREM-1, on the other hand, have a dramatically reduced risk of induced liver cancer after such exposure. The scientists also have found TREM-1 in human liver cancer cells.

To further pursue the therapeutic potential, after again exposing normal mice to the carcinogen, Horuzsko is now also giving an existing, short-acting peptide that blocks TREM-1, anticipating that it will reduce the liver cancer risk in the mice to that of the TREM-1-deficient ones. Horuzsko notes that he is simultaneously working on a more powerful inhibitor since the research peptide he’s using would disappear in patients in just a few hours, while therapy could be needed long term to help prevent liver cancer in high-risk patients and, potentially, to help halt progression in those who already have it.

HIS LAB also is monitoring the crosstalk between hepatocytes, which make up about 80 percent of the liver, and Kupffer cells during the promotion and progression of liver cancer in both normal and TREM- 1-deficient mice. The goals are to learn more about what happens between HMGB1 and TREM-1, what regulates TREM-1 on liver cancer cells, and TREM-1’s role in cancer proliferation and survival. “We want to remove TREM-1 from tumor cells and see if that will prompt tumor regression,” Horuzsko said.

He is also blocking fibrosisproducing stellate cells for therapeutic potential and studying how they and Kupffer cells are related, other than co-existing between liver cells. “We need to understand who activates whom,” he said, adding that he’s betting on the former.

About 33,000 new cases of liver cancer occur annually in the United States, the vast majority in men, according to the American Cancer Society. About 23,000 Americans die from it annually, and liver cancer is a leading cause of cancer death worldwide. Liver cancer is often asymptomatic until it has reached advanced stages. Advanced-stage symptoms include weight loss, loss of appetite, and feeling full after a small meal.