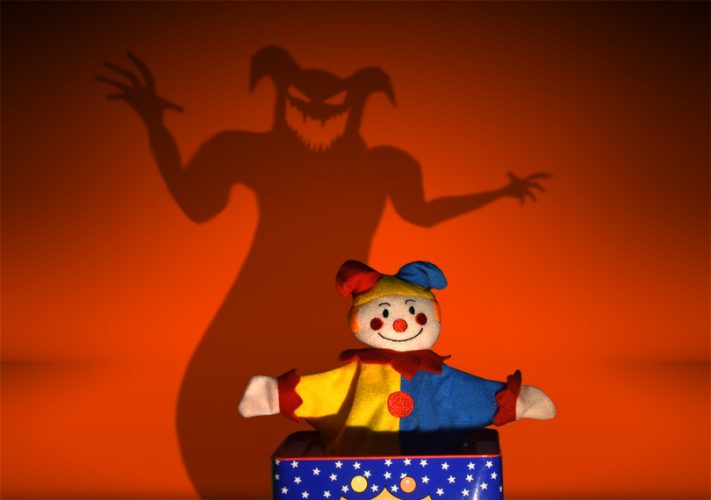 Fear is the one emotion we can always count on.

Talking to Pam Chinnery feels like catching up with an old friend.  She’s one of those people who can make you feel like you’ve known each other forever even if you’ve had only one conversation.

Easygoing and talkative, it’s not hard to find common ground with Chinnery. After all, the Augusta University alumna (BA ’16) is a mother, friend, artist and an Augusta student, again. She is currently pursuing a master of arts in teaching and hopes to teach elementary-age children when she graduates in May.

There’s no small sense of irony, then, that the passion she’s turned into a 30-year career — the thing that makes her even more accessible to many — is the very thing that makes others, including her best friend of more than 40 years, turn cold with fear.

Thirty-three years ago, Chinnery dressed up as a clown to help a friend sell balloons at a St. Patrick’s Day parade, and her life has never been the same.

“A little girl jumped out of her car and ran over to me,” Chinnery remembered. “She put her arms around my legs and said, ‘Miss Clown, I love you.’ To have that kind of instant rapport with a child just really spoke to my heart, and I knew it was a world I wanted to be a part of.”

However, not everyone is so fond of clowns. One look at the frenzy over last year’s well-documented clown sightings is all it takes to show how many people are afraid of clowns, including Chinnery’s best friend.

A few years ago, Chinnery’s friend was in the hospital. Chinnery was in-between events and decided to visit with her friend. The only problem? Chinnery was dressed as Pammy the Clown.

“She told me she wouldn’t speak to me if I was in my clown outfit,” Chinnery said. “She’s terrified of clowns, but she doesn’t know why. She says she’s not afraid of me, but it’s the fact that clowns have a lot of makeup on. I think some of it is the unknown.”

The dynamic between Pammy the Clown and her best friend illustrates the power that fear can have over a person. But what exactly is fear, and why is the emotion strong enough to make someone afraid of her lifelong friend?

Psychologists have identified fear as a basic emotion. According to Dr. Almira Vazdarjanova, associate professor in the Department of Pharmacology and Toxicology, fear is, in its simplest form, an emotion that enables human survival.

“Fear is a core emotion that’s been preserved in humans as an adaptive response to a threatening environment and gives the organism the ability to survive,” she said. “It enables survival.”

In a survival situation, fear is an emotion that can move someone to action in a way that is almost like a reflex, according to Dr. Bernard Davidson, associate professor in the Department of Psychiatry and Health Behavior and a licensed psychologist.

“We have no choice in feeling fear,” Davidson said. “Fear is healthy. It’s good that we get scared when we are in a building and hear a fire alarm.”

In many instances, however, people actually confuse fear with anxiety. When someone mentions they’re scared of heights, spiders or even clowns, what they usually mean is that these things make them anxious.

“In its purest form, fear triggers a response to keep us alive,” Davidson said. “Sometimes, we start responding to safe situations as problematic situations, and that’s where we use the term anxiety.”

Simply put, fear is about survival while anxiety reflects anticipation of things that might happen.

If a person was bitten by a snake and later sees a snake, that person is likely to feel afraid. This is a fear response, according to Vazdarjanova. A person who is afraid of flying but has never been in a plane or a plane crash is most likely experiencing anxiety.

“Fear is the physiological and emotional state when a specific threat is present,” Vazdarjanova said. “Anxiety is an elevated state of unease without any specific stimulus. It is usually longer lasting. On a physiological level, the brain processes fear and anxiety with different, although partially overlapping, brain networks.” 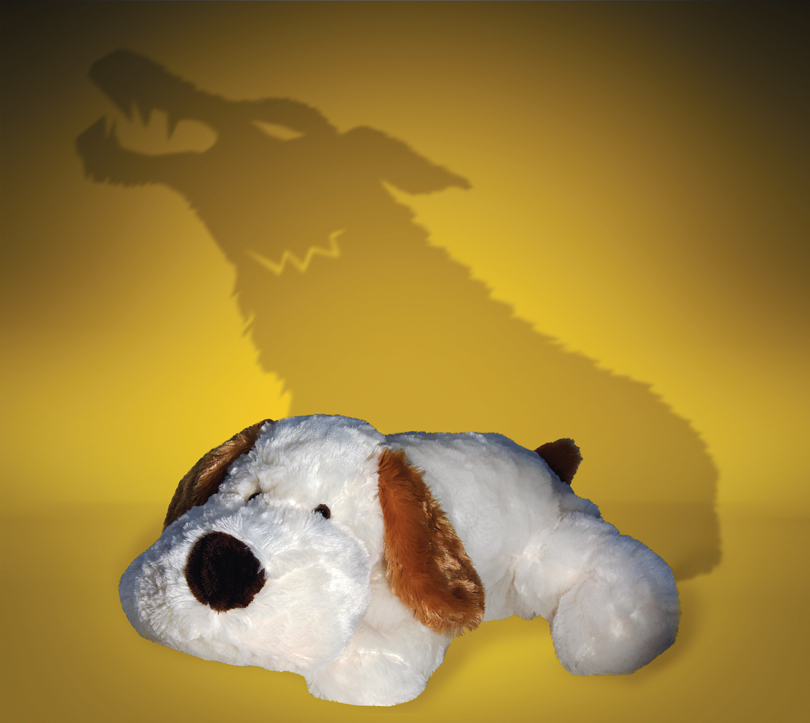 But if fear is about survival, then why do people seek out activities that will make them afraid and anxious? For example, why go skydiving if you’re afraid of heights?

“People seek out fearful situations because they’re interpreting it as something that’s fun,” Davidson said. “They’re scared, but the types of substances released in our body and the response we’re having are very similar if not identical to those where we feel thrills, excitement and exhilaration.”

“There’s also something about mastering a fearful situation that’s reinforcing or gratifying,” he said. “But it gets stored in your brain as a situation you’ve enjoyed and mastered. If not, why would someone go skydiving or rock climbing again?”

Not everyone approaches fear with the intent to overcome it, however. Some — especially fans of true-crime podcasts and documentaries – seek it out of a morbid sense of curiosity.

“I think we’re fascinated by true crime because it breaks social norm,” explained Dr. Candace Griffith, assistant professor in the Department of Sociology, Criminal Justice, and Social Work. “Crime, particularly what we’re interested in, is violent. It’s like a violent fetish. We want to see other people suffer as long as it’s not us.”

Though far removed from the thrill of climbing a mountain or jumping out of a plane, fear seekers still take a certain amount of pleasure from tales of intrigue, even if they’re just verbal or visual retellings. What it boils down to is that people love stories – the good, the bad and the ugly. Remember the ghost stories you used to tell around the campfire and how scary they seemed?

“People just like a good story, and sometimes crime and mystery creates a good story,” Griffith said. “There’s a reason Sir Arthur Conan Doyle was so popular. He wrote great stories. People love stories that don’t have a neat ending.”

But is the fascination with crime serving a purpose, or is it eroding society’s sense of well-being?

In the late 1990s and early 2000s, a story spread about gang initiations. More specifically, that people driving at night with their lights off were gang members looking for victims. Other drivers who flashed their lights at them would flag themselves as targets.

Dr. Todd Powell-Williams, associate professor of sociology, heard the same rumors as a graduate student in Illinois. He said the fact that the story is untrue has no bearing on whether or not people are afraid.

“We’ve already decided that it’s gang members in the vehicle, and that we should be afraid of them,” he said. “The fear of what might happen makes these situations real. People change their patterns of movement. Maybe they don’t go out at night or won’t flash their lights at someone.”

In these situations, fear isn’t the healthy emotion that Vazdarjanova and Davidson describe. Instead, the “what-if” has become a source of anxiety that can be crippling.

“A certain amount of fear can be healthy, but if that fear begins to keep us from living our lives then it’s become a problem,” said Powell-Williams.

He theorizes that it’s the thrill associated with fear that attracts people. Perhaps it’s why we continue to listen to those podcasts or watch scary movies.

“I think what I like about scary movies, and probably what appeals to a lot of people, is that you get a thrill that is happening in a controlled environment,” he said. “In these environments, you most likely will not get hurt because the environment allows you to control the risks. We find it enjoyable because a little bit of adrenaline feels good. It certainly reminds you that you’re alive.”

The mainstream, viral popularity of the docuseries “Making a Murderer,” the podcast “Serial,” the remake of Stephen King’s It and more blur the lines between fear and fascination. It also begs that question, is it dangerous to cultivate a culture that is obsessed with fear and all that it encompasses?

It can be dangerous to feed off shared fears to relate to one another, according to Melissa Powell-Williams, associate professor of sociology.

“Fear is a motivating factor influencing our behavior, but it can be socially constructed and manipulated,” she said. “Inherently, fear is not bad. It can keep us alive and safe. The problem occurs when fear is socially managed in negative ways. It can be the source of discrimination, prejudice, hate crimes, violence, war, etc.”

Powell-Williams teaches a class on the  sociology of the undead that touches on fear and its reflections on society. The class explores these concepts through the lens of zombie television shows and movies.

“Zombies represent fear,” she said. “They represent the things that our culture is currently afraid of. What’s interesting is that the zombies change dramatically depending on what we’re afraid of. For example, Night of the Living Dead reflects the civil rights era and issues of inequality. Now, you see more post-apocalyptic zombies. This could be seen as a symptom of where we are as a global society and the fear of terrorism.”

This same concept can be applied to Stephen King’s It. In the movie, “it” takes several forms, from a clown to a spider. Essentially, it doesn’t matter what “it” is, according to Powell-Williams. “It” is whatever is scary to the person watching, and the fear isn’t as important as the response.

Knowing this — knowing how deeply ingrained fear is in our collective subconscious — can we ever truly conquer “it”?

The answer is, “It’s complicated.”

With more knowledge and understanding of our particular fears, societal or otherwise, we can absolutely begin to challenge our own perceptions. Eventually, meeting those challenges might lead to greater self-knowledge, a better understanding of who we are. If we’re lucky, it might even lead us to become less fearful.

Will we ever conquer all of our fears, though? No. And we should never want to.

For all the thrills, chills and night sweats they give us, simply put, our fears keep us alive. They make us human.

But would knowing or understanding that make Pam Chinnery’s friend feel any more comfortable coming to see her perform? Don’t count on it.

WHAT ARE THE ODDS?

Fear can be a good way to keep us from engaging in unsafe behavior, but not all fears are reasonable. Here’s a look at some common fears and the odds of them actually killing us.

Odds of dying from a motor vehicle crash are 1 in 114.

Odds of dying from drowning and submersion are 1 in 1,188.

More Than a Room