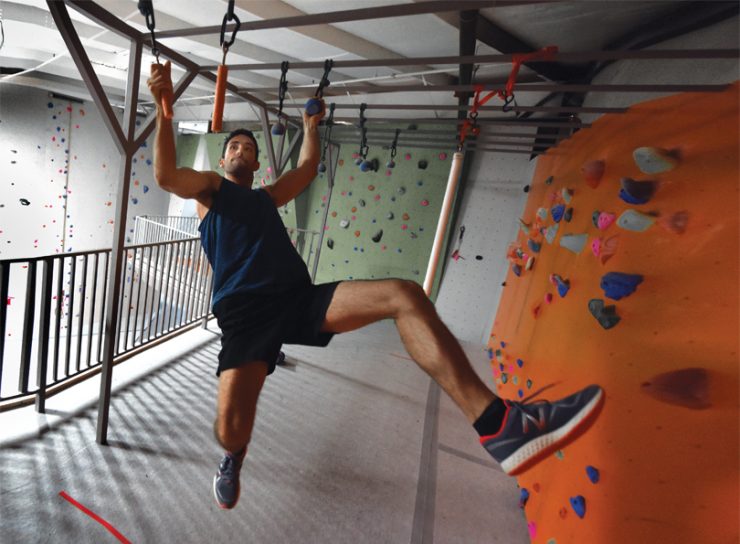 First Look: The Heart of a Ninja

So, how did you spend your spring break?

Unless you were competing on an internationally televised reality show, Jackson Griffeth’s story probably beats yours.

But you’d never know it from Griffeth, an immensely humble third-year dental student who makes only passing references —
and then generally only when asked — to his stint on “American Ninja Warrior.”

Griffeth, a lifelong jock from Gainesville, Georgia, entered the competition on a friendly dare at a party last New Year’s Eve. “The application deadline was January 1, so I had absolutely no expectations,” says Griffeth. But his application — a hastily produced video demonstrating his physical prowess — was accepted.

Griffeth kicked his training into high gear, cheered on by wife Katherine, also a fitness enthusiast. “Our favorite thing to do is make food and find ways to burn the calories so we can do it again,” Griffeth says with a laugh.

But even his ramped-up training routine didn’t quite prepare him for the rigors of the competition, videotaped in April in Kansas City, Missouri. He had to conquer six obstacles to complete the course, and he made it to the end of the fourth. “The third obstacle, staying balanced on rolling logs, was a big challenge, but I got through it,” Griffeth says. “I thought, ‘If I could make it through that, I’m golden.’ But the next obstacle [swinging from one bar to another and ratcheting each bar higher from a pull-up position] did me in. My fingers just gave out on the last bar. I ran out of juice.”

His family and friends hosted a viewing party when the episode aired July 3. They were disappointed that Griffeth’s footage didn’t air but have high hopes for a repeat performance. Griffeth can’t wait
to reapply.

“The best part was getting to know my fellow competitors,” says Griffeth, noting that many have overcome huge challenges, such as cancer, and have an unquenchable zest for life.

Oh, and one last perk: “I couldn’t enjoy any of Kansas City’s famous barbecue before the competition,” Griffeth says, “but afterward, I got a big plateful.”