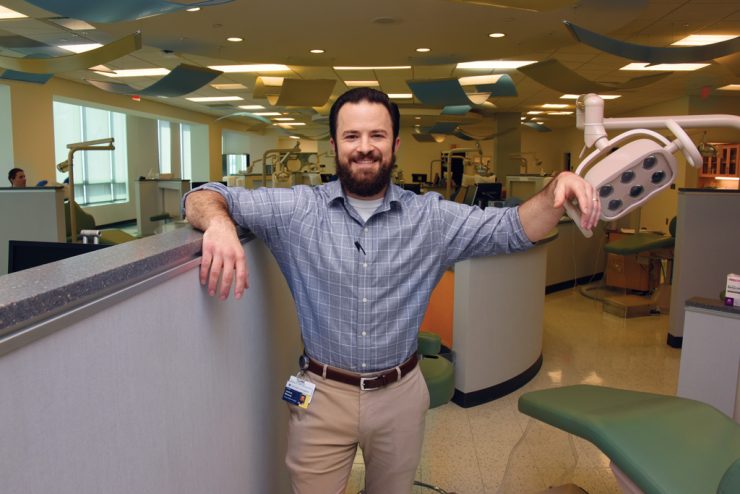 Joshua Massey was a 16-year-old awaiting a driving test at the Department of Motor Vehicles when the television set in the waiting room began broadcasting live footage of planes crashing into the World Trade Center. The date was Sept. 11, 2001, and Massey knew he would never again be as carefree or self-interested as he’d been only moments before.

“The flames of patriotism started burning in my heart,” says Massey, who responded by enlisting in the U.S. Navy after graduating from high school in Lawrenceville, Georgia.

He opted for helicopter search-and-rescue training, a regimen that included grueling runs, calisthenics and long swims in frigid water. “We were basically pushed to the point of exhaustion. About half of the trainees didn’t make it through,” says Massey.

But Massey prevailed, going on to multiple deployments to Iraq and Somolia as a helicopter crewman and door gunner. He also participated in domestic relief missions, including those for Hurricanes Rita and Katrina. “We flew in, delivered aid, evacuated personnel and rescued people from floodwaters,” he says. “It was devastating to fly over cities that looked like piles of matchsticks.”

Yet Massey was hooked on what he calls “the infinite rewards of helping others.” After his military stint, he dabbled at a different path — majoring in business in the University of Georgia Terry College of Business — but quickly sensed a mismatch and accepted a position as a private contractor with the Department of Defense working in Afghanistan. He was happy to rejoin the military environment but wanted a long-term plan. After considering multiple careers in health care, he opted for dentistry.

“It was a root canal that made me realize I could combine what I’d learned at UGA with a health care career,” he says. “I liked the idea of owning my own business and working in a team environment.”

At age 33, he enrolled in The Dental College of Georgia and is now a second-year student. Soon after he began dental school, he and his wife, Katherine, welcomed their son, Edward Massey II, into the world, so he’s been almost as busy the past few months as he was during his naval training.

“Sometimes I feel like there aren’t enough hours in the day, but the military taught me adaptability, flexibility and discipline, all of which are very beneficial,” Massey says. “I’m used to high-pressure environments. But at this juncture in my life, I couldn’t do it without my wife. She’s the rock of our family,”

He looks forward to a career that combines his desire to serve others with a healthy work-life balance. Says Massey, “I know this path will be challenging, but I think I’m exactly where God wants me to be.”