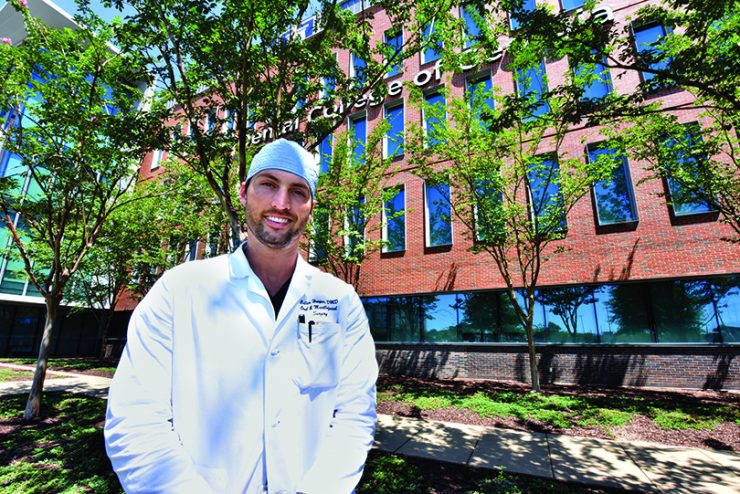 Ask Cullen Harper his favorite football memory, and he singles out a fourth-quarter drive setting up a buzzer-beater field goal that sealed his team’s victory. The final score: Clemson Tigers, 23, University of South Carolina Gamecocks, 21.

Harper, the quarterback of that drive, was badly injured during the game — “my shoulder felt like it was dislocating with every throw I made and every time I landed on it” — but he powered through.

Harper has brought that same grit and determination to DCG, where he is beginning his training in oral and maxillofacial surgery.

The athletic prowess of Harper, a native of Alpharetta, Georgia, was evident early on. “I was a running back in sixth grade, but when my coach saw me throw, he switched me to quarterback,” says Harper, whose father, Jeff, played right offensive guard for the University of Georgia.

Harper was laser-focused from that point on, playing so well in high school that he was scouted by top-tier colleges his junior year. He opted for Clemson, where he was starting quarterback in 2007 and 2008. He broke 28 school records, throwing for a total of 5,762 yards, helping score 42 touchdowns, receiving the 2007 Banks McFadden Award as the top player in South Carolina and earning Second Team All-ACC accolades.

“I just love the game,” says Harper. “Football is the ultimate team sport. For one play to work, you have to have 11 guys on the same page. I enjoy working together as a team.”

He envisioned a professional career, but after a pre-season with the Buffalo Bills, he recalibrated. “I wanted to play as long as I could, but particularly in professional sports, the sport lets you know when you’re done,” he says. “I knew it was time to pivot.”

His next step was returning to Clemson for an MBA, but after a year in medical device sales, he found himself more interested in providing the actual care for patients. He enrolled in the Medical University of South Carolina, earning his DMD last spring. Next stop? Augusta.

“Once in dental school, I took a hard look at oral and maxillofacial surgery and knew without a doubt this is what I wanted to do,” Harper says. “This is a really good program, with a full scope of procedures, excellent facilities and a great group of residents and attending physicians.”

His workload is daunting, particularly considering that he and his wife, Jordan, recently welcomed a daughter, Charlie, into the world, but Harper is unfazed. “Being a student athlete prepared me well for hard work and time management,” he says. “I’m exactly where I want to be.”