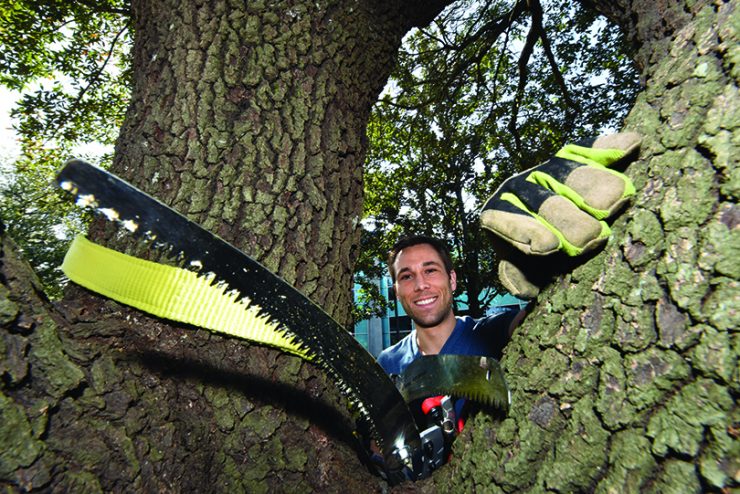 The easiest way to describe Dan Petersen, a second-year DCG student, is to explain that his recent cross-country bike ride from the Atlantic to the Pacific is not the most intriguing part of his story.

No, the bike ride would have lots of competition for his VIP (Very Interesting Past) Award.

There’s the time he lived in impoverished areas of Mexico as a missionary, for example, lacking access to hot water for months at a time.

Or there’s the time he worked as a professional tree-climber, sawing branches from 60 or so feet off the ground.

Or there’s the time his wife, Valerie, went into labor with their son, McKay, during exam week last year, requiring Dan to zip from the hospital to a DCG classroom, then back again, then off to a lab for an operative dentistry practical, then back to Valerie’s bedside, etc., etc.

But back to that cross-country bike ride:

Dan’s sister’s husband had recently been killed in a tragic accident, leaving her with two small children to raise on her own. Dan decided to help her by organizing a cycling tour, enlisting bike manufacturer Fezzari as the primary sponsor, and the Liz Logelin Foundation, dedicated to supporting grief-stricken young families, as the beneficiary. He and his fellow cyclists logged 40 to 120 miles a day, biking from Virginia to Florida, then west to San Diego, California in about 10 weeks, raising some $20,000 for the foundation. “I think I learned more from that cycling trip than any semester of school,” Dan says. “It was a great experience.”

He also learned more than he ever dreamed during his mission trip in Mexico. “It gave me a totally different perspective on so many things,” Dan says. “It changed my ideas about cultures, societies, wealth . . . what the bare necessities of life are and what you actually need to be happy.”

The tree-climbing job, of course, gave him his loftiest perspective of all. “It was challenging, but it turned out to be one of my favorite jobs. My boss never failed to say, ‘Thank you for your hard work.’ We’re actually still in touch.”

Dan’s life experiences came in handy upon his DCG enrollment. His days are basically endless, what with keeping up with the didactic coursework and diving into the clinical phase of the curriculum while raising a baby with Valerie. But he has no complaints.

“My wife’s support has been the biggest factor in getting through it and reminding me of what’s important in life,” he says.

After graduating, Dan will complete an Air Force residency, serve three years on active duty, then five more years in the reserves.

“At that point, I’m hoping to start my own practice,” Dan says. “I’m leaning toward general dentistry, having a great career while raising my kids. That’s what I’m most excited about.”