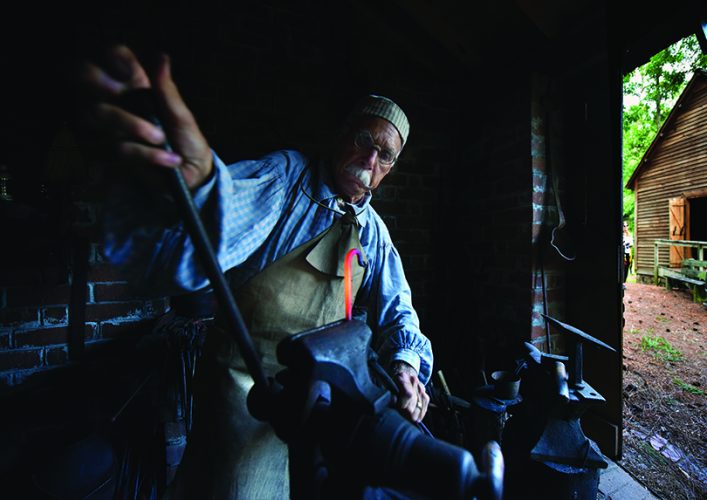 Secret Lives: One Step Ahead

He joined the DCG faculty in 1976 not as a dentist, but as a psychologist, overseeing a program called Dental Practice Dynamics to teach students the business and psychological aspects of the profession. He also had a joint appointment in the Medical College of Georgia Department of Psychiatry until his retirement in 2001, at which point he stayed on at the DCG part time, a position he continues to hold. “I help translate skills from head to hand,” he says.

Kaltenbach brings that same diversity to his hobbies. His interests — fencing, sailing, singing with a barbershop quartet and wine-tasting, to name just a few — are incredibly far-reaching. But one hobby in particular almost literally transports him to a different world.

“One of the hobbies I recently picked up is blacksmithing,” he says. “I met a blacksmith at a Colonial re-enactment in North Augusta’s Living History Park, and he offered to teach me how to do it. I found out later he doesn’t do that very often.”

Kaltenbach definitely has that effect on people; his enthusiasm for learning new things, even in the seventh decade of his life, tends to be infectious. He is now a member of the Philip Simmons Artist Blacksmith Guild and demonstrates his skills at Colonial re-enactments throughout the Southeast.

“It’s certainly deceptive,” he says of blacksmithing. “It looks like pounding on iron, but how you hit, where you hit and how you move the metal is the art. It makes the difference between working really hard and working knowledgeably. I’ve also had to learn a lot of metallurgy, which I enjoy, because I approach things academically. I find it really gratifying to create a product that can’t be made by the average person.”

His Colonial re-enactments aren’t his only activity involving alter egos. Kaltenbach exchanges his Colonial-era clothing for Mardi Gras attire during his annual participation in New Orleans’ famous parade. Kaltenbach, a native of the city, is a member of the Krewe of Thoth. “Last year, as a royal duke, I rode on the royal barge, right by the king’s float,” he says. “We have activities throughout the year — my favorites are the Bal Masque (masquerade ball) and the Charity Walk — and we do a lot of volunteer work, including maintaining a dental clinic with volunteer dentists.”

If you wonder how Kaltenbach keeps all of his pursuits straight, rest assured he’s one step ahead of you. Says Kaltenbach, “People say, ‘Turn Bob on and he’ll tell you the history of everything.’”