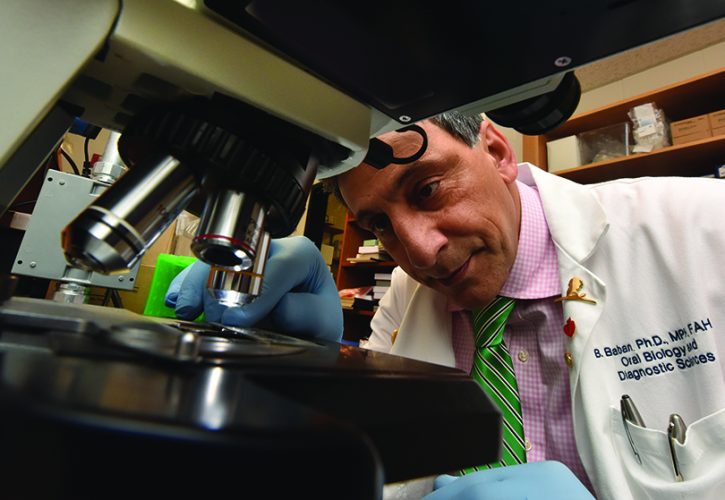 Ask Dr. Babak Baban about his current research project, and you’ll have to get much, much more specific.

Baban, who was recently named DCG’s interim associate dean for research, is an investigator on a whopping 24 projects campus wide and beyond, and considering the demand for his expertise, the number will no doubt keep growing.

“My biggest challenge is time,” Baban, a native of Iran, says with a smile. “I have very few hours for anything other than work, but I enjoy it.”

Baban, who earned his Ph.D. in immunology from the University of London, has a simple explanation for why his expertise is in such high demand: Immunology is all about balance. “The Greek foundation of medicine is healing and balance, which is actually the foundation of life itself,” he says. “When you have balance in everything, you are healed.”

And nothing is as crucial to balance, Baban posits, as the immune system — a finely calibrated defense mechanism to oust harmful substances from the body while leaving harmless, or even helpful, ones undisturbed.

Problems arise when the system goes awry — for instance, giving a pass to cancer cells, or declaring war on the body’s own tissues. The implications are so immense that Baban is hard at work exploring strategies to trouble-shoot the immune system in areas as diverse as cancer, brain injury, hypertension, heart disease, stroke, autism, Parkinson’s disease and vision.

He has relished bringing that same perspective to his role at DCG, in which he not only pursues his own oral medicine studies, but facilitates the projects of the entire DCG community.

“I was already working on six DCG projects when I was named to my new position,” Baban says, “and now, I am supporting dental research in every way possible.”

He has a first-hand grasp of researchers’ needs — funding, infrastructure, equipment, time management and business considerations, to name a few — and does everything he can to optimize their endeavors. He is heartened that the foundation of the research program is so strong.

When Dr. Judson C. Hickey was named DCG’s founding dean in 1968, he demonstrated his firm commitment not only to provide the best dental education possible, but to continuously build on the science of the discipline. He recruited faculty with both dental degrees and advanced degrees in basic sciences, creating a wellspring of expertise in biology, physiology, pharmacology and the other fields of study laying the foundation for oral health care. In the 50-plus years since, DCG faculty, residents and students have made countless contributions in areas including fluoride metabolism, esthetic techniques, biomaterial efficacy, caries prevention, dental implants and temporomandibular joint diseases.

This role in improving oral health care through ongoing scientific advancement is particularly vital in light of DCG’s distinction as the sole dental school in Georgia, Baban notes. “Both our basic and clinical research programs are very well-established,” he says. “I think one of my main contributions is serving as an example of the collaborative world. I try to connect faculty with the right colleague, the right organization.”

Baban’s own research projects include collaborations both on the Augusta University campus, chiefly with DCG and the Medical College of Georgia, and with universities and industries worldwide.
A chief focus right now, involving both DCG and MCG collaborators, is the microbiome — the community of bacteria that lives in the body.

“Nine out of every 10 cells in the body are non-human,” Baban says. “There are entire microorganism societies living in our body, and the largest are in the gut and the oral cavity. The oral cavity is important because we interact with it constantly. Eating, brushing, flossing — all those things and more affect the oral microbiome.

“Most of these cells are nonpathogenic and help the body function,” he says. “Microbiota seem to be emerging as one of the best treatments for antibiotic resistance using our natural system to treat diseases.”

The implications are exciting, he says, not only for the local microenvironment’s potential role in so many disease processes — including, he recently discovered, diabetes — but because the microbiota provide increasing evidence of how closely oral health correlates with overall health. “The microbiome in the oral cavity affects the microbiome in the gut,” Baban says, expressing optimism that a well-balanced microbiome will have beneficial domino effects throughout the body.

He and Dr. Jack C. Yu, an MCG faculty member, and Dr. Hesam Khodadadi, a DCG research fellow, recently published an article in the EPMA Journal citing mounting evidence that oral diseases are best treated with the body’s own defenses, including probiotics and manipulation of innate lymphoid cells.

Innate lymphoid cells, or ILCs, a type of white blood cells, were discovered in 2007. They are among the first lymphocytes appearing in human embryos and are revealing startlingly broad implications for wellness. “Their frequency and number are very low, but they appear to be the initiator of the whole immune process,” says Baban, who along with colleagues has found them in human milk and kidneys, among other sites. He is working with Dr. Mira Ghaly, assistant professor of periodontics, and Dr. Mahmood Mozaffari, professor and associate chair of oral biology and diagnostic sciences, to specifically probe their presence in gum tissue, hoping that manipulating their action can target periodontitis.

“They are very powerful and functional cells,” says Baban, who has also recently discovered that the cells have receptors for cannabidiol (CBD), unleashing a host of potential treatment avenues. Medical cannabis, he notes, has anti-inflammatory properties and seems to help maintain healthy tissue. Using innate lymphoid cells to prod cannabidiol into action could have applications for chronic wounds, opiate treatment, kidney injury and many other diseases and conditions.

Also of keen interest to Baban are dendritic cells, those charged with training cells to activate a defense against invaders that the immune system fails to innately recognize as harmful.

“The immune system has two defense mechanisms: innate, or natural, which is fixed at birth, and adaptive, or acquired, which is learned,” Baban says. “Some cells require training, getting dispatched from the body’s military bases (the lymph nodes) to danger zones. Dendritic cells are among the most important in training those cells.”

Dendritic cells, for instance, will travel to a tumor site and gather cancer cells, then return to the lymph nodes and present them to T cells, those charged with mounting a defense. Armed with information that the cancer cells are harmful, the T cells spring into action. “T cells are like special forces,” Baban says. “They know exactly what they are looking for when they go on attack.”
This is what happens in a perfectly calibrated immune system.

But some cancer cells find ways to prevail — for instance, by overwhelming their attackers or convincing dendritic cells they are harmless — and sometimes the immune system simply miscalculates, or is flawed in some way that prevents it from optimally doing its job.

Baban’s quest — which he shares with neurologists, cardiologists, oral biologists, ophthalmologists and many other specialists at AU — is to correct these imperfections. He uses animal models and human cancer cells to study the process under various circumstances — for instance, by deleting or increasing dendritic cells — to try to prevent, cure or better treat cancers and other diseases.
For example, he is working with Dr. Krishnan Dhandapani in the MCG Department of Neurosurgery to elucidate the function of neutrophils in traumatic brain injury, and with MCG Dean David Hess to better understand the role of the immune system in stroke. He also is working with Yu, MCG chief of pediatric plastic surgery, Dr. Jatinder Bhatia, chief of the Section of Neonatology, and Dr. Neha Patel, a research fellow, to explore — and ideally exploit — the role of innate lymphoid cells in human breast milk to protect newborns from infection. And he recently obtained a patent with Drs. Rafik Abdelsayed and Mahmood Mozaffari in the Department of Oral Biology to diagnose Sjogren’s syndrome, an autoimmune disease, based on biomarkers identifiable in a mere pinprick of blood.

As awed as Baban is by the potential of manipulating the immune system to treat disease, he acknowledges that a strong defense is not the whole ballgame. “Immunotherapy by itself is not enough,” he says. “For instance, just because T cells attack doesn’t mean they will defeat cancer cells. That’s why treatments like surgery (to reduce the size of a tumor and improve the odds of a successful attack) and chemotherapy (to weaken cancer cells) continue to be vital facets of treatment. But there is definitely increasing evidence that the immune system has a big role in treating cancer and many other disease processes.”

If you’re thinking at this point that Baban’s research efforts couldn’t possibly get more comprehensive or far-flung than they already are, well . . . think again.

It was in his recent collaboration with a group of Italian researchers that he stumbled onto one of his most surprising findings to date.

He and Mozaffari have been studying glucocorticoid-induced leucine zipper, a gene that mediates glucocorticoid actions in a variety of cell types. “We were studying the gene’s anti-inflammatory property to see if it could treat kidney injury,” Baban says.

When treating mice with an artificially made peptide that mimics the gene’s action, the researchers observed a wholly unexpected side effect: hair growth. “It was quite accidental,” says Baban.

They eagerly followed up on the observation, injecting the peptide under the skin. The result? Thick, lush hair. Augusta University’s Office of Innovation Commercialization was so excited about the potential treatment for human baldness and medical conditions such as alopecia that the director expedited Baban’s application for a patent. “He filed for a provisional patent that day,” Baban says.

Much work remains. “We need solid data in humans, which is a long process,” Baban cautions. But the peptide’s potential, which has shown no harmful side effects in his animal models, is significant. “It may be used topically or intradermally,” he says, “and we haven’t seen any problems so far. The peptide is mimicking a natural compound in our body.”

As new frontiers reveal themselves on seemingly a daily basis, Baban is eager to unleash the full potential of DCG research.

“We have the infrastructure,” he says. “We just need to put researchers in regular contact with each other. From there, the challenge is to make our research findings translational. The ultimate goal is better health care.”

On the Horizon: Seeking Balance