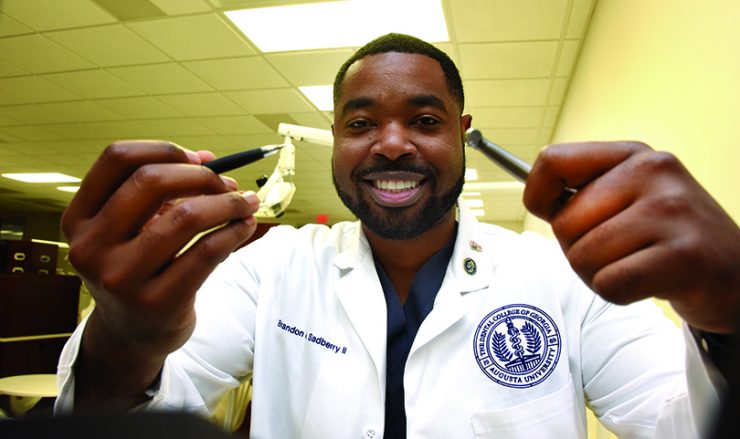 Brandon Sadberry was a high school English teacher in Stockbridge, Georgia, an Atlanta suburb, when a guest at Career Day invited his students to shadow her in her dental office if they thought they might be interested in the profession.

One person took her up on the offer: Brandon Sadberry.

“The only one interested was me,” says Sadberry with a laugh. “I really wanted to know more about dentistry, so I spent the summer shadowing there.”

Yet his passion — advocating for others — hasn’t changed. Sadberry, who grew up in the same community in which he would eventually teach, was painfully shy as a child and discovered his niche when volunteering with children as a college student. “I was teaching young kids to read, and I realized I got a lot of gratification from helping people. I also saw that teaching pulled me out of my shell.”

Upon graduation, he began his teaching career and immersed himself in it for the next nine years. “I loved it because it allowed me to be creative and really open myself up to different people,” he says.

Yet when the dentist visited his classroom that day, he couldn’t help wondering if another path awaited him. Sadberry has always loved working with his hands; he worked on cars and cut his friends’ hair as a youth. “I’ve always had a knack for hands-on skills,” he says.

The summer spent shadowing the dentist cemented his decision to change careers. “I knew dentistry would be a great way to mix so many of my lifelong passions,” he says. “It was hard leaving the classroom, but I knew I could translate my advocacy for students into advocacy for patients.”

His schedule was grueling while completing the undergraduate courses needed for dental school. “I kept teaching and went to school at night for my prerequisites,” Sadberry says. “Time management was key, along with stress management. I didn’t get much sleep, but I have a great life partner who helped me throughout my journey.”

Sadberry’s next step was to apply to the DCG. He was admitted in 2017 and plans to graduate next spring. “I was so anxious when I started, like a kindergartener on the first day of school,” says Sadberry. “But just as the first day of kindergarten eventually leads to high school graduation, I knew I would achieve my goal. Dental school has taught me a lot about resilience.”

He hopes to practice general dentistry after graduation and is keenly interested in prosthodontics. “I have a particular interest in people who have lost teeth,” he says. “I love helping people transform their lives. Once their smile is improved, they feel better, then perform better, then live better.”

Sadberry plans to keep his teaching skills fresh as well. “I want to create a strong emphasis on patient education,” he says. “I want to help make dentistry easy for my patients to understand.”