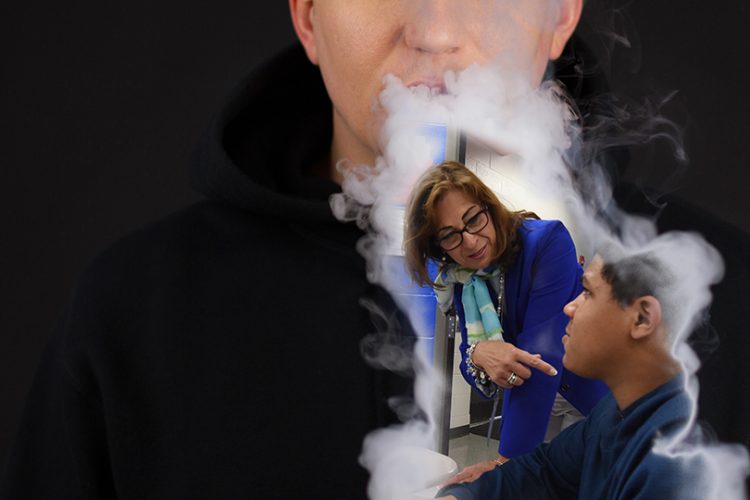 Pulling the Plug on Electronic Cigarettes

It seems like you can’t turn on the TV without hearing about the dangers of vaping, and for good reason. The risks of using electronic cigarettes include everything from burns, explosions and accidental poisonings to the newly classified vaping-specific lung disorder called EVALI, e-cigarette or vaping product use-associated lung injury.

As of February 4, 2020, a total of 2,694 hospitalized EVALI cases and 64 deaths have been reported to the Centers for Disease Control and Prevention, and while the median age of deceased patients is 51, over 50% of those hospitalized with EVALI are under the age of 24.

While the numbers are increasing and the dangers are very real, for Dr. Martha Tingen, associate director for cancer prevention, control and population health at the Georgia Cancer Center, the long term fear is the likelihood that this dangerous habit is creating a new generation of traditional cigarette smokers.

According to Tingen, 1 in 5 high schoolers report using electronic cigarettes, and the earlier people start smoking, the more addicted they become — and the harder it is for them to quit.

“I just see all these kids who are really loving electronic cigarettes, and then I think about five, 10, 15 years down the road when they’ve progressed to smoking cigarettes for a long time,” Tingen says.

Though tobacco is most closely associated with lung cancer, it is actually related to 16 different types of cancer and is the leading cause of preventable disease, disability and death in the United States.

To reverse this course, Tingen is targeting youth with research aimed at curbing this dangerous behavior. Two approaches are used: one, a positive social norms campaign that puts a positive spin on anti-vaping messages and a second that strengthens families with a prevention strategy called the Strengthening Families Program.

“It is documented in the literature that if kids develop a close relationship with their parents by the time they’re 12, they are going to pick peers that have similar values as their parents,” she says.

So the Strengthening Families Program, which addresses electronic cigarettes as well as alcohol use, focuses on developing family bonding, family cohesion and improved communication skills. The evidence-based program, is funded by a $1.4 million grant from the Georgia Department of Behavioral Health, Developmental Disabilities and Addictive Diseases, Office of Behavioral Health Prevention.

“We have a statistician who works with our team, and the program has very validated instruments,” Tingen says. “Our data, when evaluated, is compared to other people doing it all over the nation. It’s phenomenal how much we’ve moved the mark positively toward health.”

Out of the Lab: Solving the Puzzle