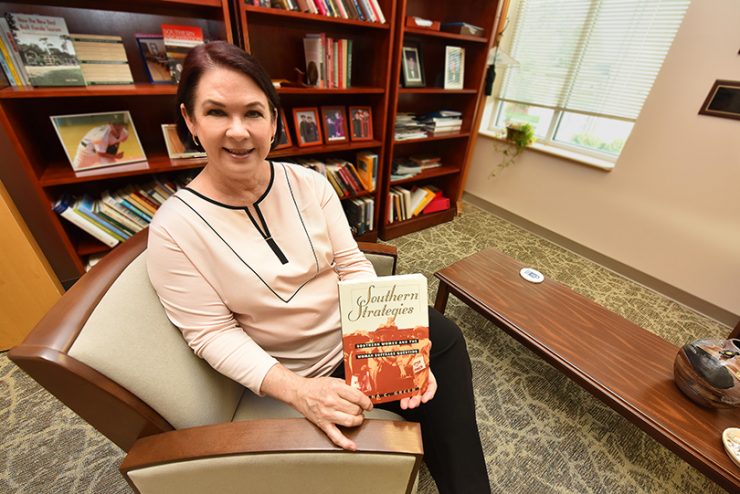 To understand the power of one vote, you don’t have to look much further than the one cast 100 years ago by Harry T. Burn in the Tennessee House of Representatives. That vote broke a stalemate which gave Tennessee, the final state needed to ratify the 19th Amendment, the opportunity to give women the right to vote.

The 72-year history of the woman suffrage movement is filled with many such inspiring stories, but Dr. Elna Green, dean of the Katherine Reese Pamplin College of Arts, Humanities, and Social Sciences, seldom gets to talk about them. Her expertise lies with the anti-suffragists. In fact, you could say she wrote the book on them. Published in 1997, Southern Strategies: Southern Women and the Woman Suffrage Question remains something of the final word on the subject.

As an expert on the anti-suffrage movement, Green recently participated in a documentary produced by Nashville Public Television to commemorate the 100th anniversary of the ratification of the 19th Amendment, which was officially adopted in August 1920.

“There are no heroes on the anti-suffrage side of the story,” she says regarding the scope of her research. “I grew very tired of being on the wrong side of history.”

However, she says, studying the anti-suffragists helps us to understand the many meanings of the pro-suffrage movement.

“None of us are single-issue people,” Green says. “We don’t make up our minds on political questions based on a single demographic characteristic of ourselves.”

But the power of that one vote, cast when it was, has even deeper implications, she says.

“There was no guarantee woman suffrage would pass when it did,” she says. “After 1920, we were focused on other things: the Red Scare, Prohibition. Then the market crashed, then came the Depression, then World War II. Votes for women could easily have been pushed back and pushed back until after the Second World War.”

Which should give everyone a lot to think about come November — or any election, for that matter.

Like
Like Love Haha Wow Sad Angry
Elna Green Latest Mine the Past Pamplin College Woman Suffrage
Share your story
Our best stories often come from suggestions from the campus community.
Submit News

A Question of Sleep