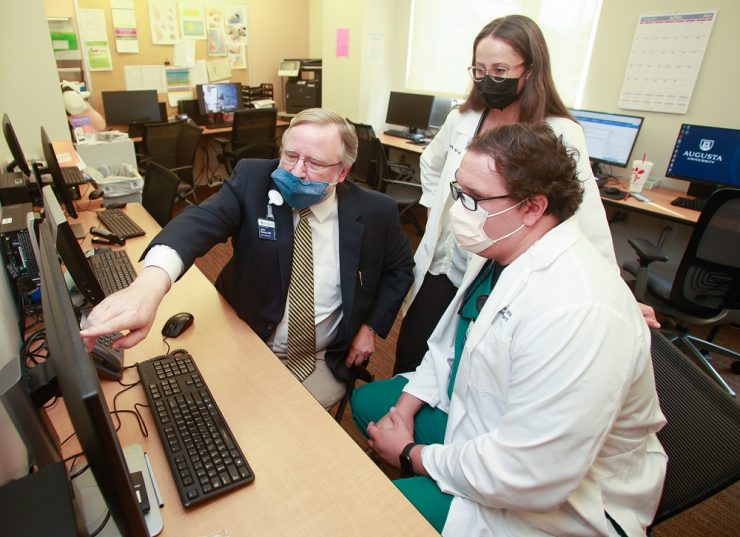 Monday through Friday, neurooncologist Dr. John Henson climbs into his car, buckling in for the drive home from Augusta to Lake Oconee. Today, it’s a podcast, tomorrow it may be an audiobook. He hits play, breathes and settles in for the ride.

After 30 years in the field of neurooncology, Henson still appreciates that ride, too, and is just as driven and engaged in caring for patients with a form of cancer that’s often unsurvivable. He came to the Medical College of Georgia in January 2021 from Seattle, where he was medical director of the Ivy Center for Advanced Brain Tumor Treatment at the Swedish Neuroscience Institute, and director of the Swedish Neurofibromatosis Center. Prior to that, he worked for more than 20 years in academic medicine, including serving as an associate professor of neurology at Harvard Medical School and Massachusetts General Hospital and a clinical associate professor of neurology at the University of Washington School of Medicine.

Now, as director of neuro-oncology at MCG and at the Georgia Cancer Center at Augusta University, Henson is actively building a neuro-oncology program that’s currently the only one in the state outside of Atlanta. He’s focused on launching new clinics, advancing new clinical research and sharing an important opportunity: “to provide something of value,” he says, for families throughout the region impacted by tumors and cancers of the central nervous system.

It’s March — only about seven weeks into his time at MCG — and Henson shuts the door to his office, sends an email through the AmWell program and, a couple of minutes later, is talking to and seeing his first teleneuro-oncology patient; it’s a “big development, given the large area we cover in Georgia and South Carolina,” he says, and one that he plans to grow.

Two times a week, he has already been holding joint multidisciplinary clinics: a neuro-oncology clinic with surgical neurooncologist Dr. Martin Rutkowski at the Georgia Cancer Center and a complex brain metastasis clinic with radiation oncologist and interim chair of the Department of Radiation Oncology Dr. John Barrett at the Georgia Radiation Therapy Center. “There are few patients we see who don’t need to talk to two or three other doctors,” he says, typically a surgical neuro-oncologist and radiation oncologist. Then there are the side effects of brain cancer and treatment that must be managed, such as seizures, mood changes, risk of infection and more. With a host of other neurological issues that always need to be addressed, the multidisciplinary format of the clinics —which includes Sheila Hall, BSN, nurse navigator, who provides patient coordination — eases that process significantly.

In May, he launched the state’s first clinic for both adult and pediatric patients with neurofibromatosis, a rare and disfiguring genetic disorder that causes tumors to grow on nerve cells.

He’s also establishing a Hereditary Cancer Clinic, which will offer multidisciplinary risk assessment, genetic testing and counseling, personalized surveillance and care coordination to patients and families with known or potential hereditary cancers, like breast and ovarian; Henson co-authored the first medical textbooks in this area.

He also recently had a virtual meeting with a longtime colleague in Orlando to talk about the possibility of developing a southeastern brain tumor study group, which, he says, “if it takes off, could be massively exciting.”

The program’s focus on clinical research is a differentiator, says Henson. What a robust clinical trials program can do is change not only the lives of current patients, but also the future of brain cancer care. “That’s significant,” he says.

Most of the necessary components for a robust neuro-oncology program were already here at MCG and working — medical oncology, surgical neurooncology, radiation therapy, nursing, and social work — but “we didn’t have the subspecialty neuro-oncologist to drive program development, and now we do,” he says.

As a result, patient volumes, he says, have been “skyrocketing.”

“If you look at cancer, it’s one of the most feared diagnoses a person can get from a doctor, but within cancer, brain cancer is the worst because it’s a tumor that affects your humanness,” says Henson. “And so what we find is there’s a very, very urgent, deep need to get a diagnosis, formulate a treatment plan, and get the patient on something that can help them move forward with what is an emotionally devastating diagnosis.”

At the same time, with more than 100 different types of brain tumors currently classified, the five-year relative survival rate for certain cancers such as ependymoma or anaplastic ependymoma —which arise in the ependymal cells in the brain and spinal cord — can be as high as 92%, according to the American Cancer Society. That’s good news. That same rate for common and aggressive brain cancers such as glioblastoma — what Henson calls brain cancer’s “bad actor” — sits at 22%, but compare that to less than 1%, which is what it was 15 years ago.

Overall survival rates have increased dramatically within the last decade thanks to the addition of temozolomide to the chemotherapy regimen, says Henson.

While that still leaves about 80% of patients with glioblastoma with a sobering diagnosis, certain patients also have targetable mutations that respond to small molecule inhibitors or immunotherapy. “There’s [also] a whole host of less common brain tumors, some of which are compatible with a normal life span,” he says. “For lymphoma in the brain only, we can cure thirds of patients. That’s cure with a capital C — it’s a big deal.”

Still, it remains a challenging field, and there can be no cookie-cutter treatments with brain cancer because of the delicate organ it invades: “Your brain is not only the control center of a lot of function, but it’s also what makes you human,” he says.

Brain tumors make up only 1% of all cancers, so historically, as the field of oncology began to subspecialize, the focus was on more common breast, lung and colon cancers. Neuro-oncology is relatively new, started only about 30 or 40 years ago, just as Henson was beginning his training. Memorial Sloan Kettering formed one of the nation’s first fellowships, which is where Henson went.

While the subspecialty is still uncommon — the U.S. trains only about 10 to 12 neuro-oncologists annually, says Henson — “every hospital of any good size, particularly in academics, nowadays really wants a neuro-oncologist.

“It turns out that even though [brain cancer] is only 1% of cancers, in a metropolitan area, enough patients needthat care, so an organization can support a neuro-oncologist.”

Here at MCG, Henson is helping to train 12 neurology residents and eight medical oncology fellows, including one senior neurology resident he hopes will rejoin the institution following his fellowship in neuro-oncology.

The Beginning and the End

Their interest in the subspecialty likely mirrors his own. “I talk to trainees a lot about this,” he says. “During your training, you’re learning some facts, but what you’re really doing is you’re dating subject areas to see if one fits you. If you’re lucky, you find something that just fits your intellectual and your personal and your emotional interests extremely well.”

When he “met” neuro-oncology during his residency at Vanderbilt University, he says that it suited him. “There was the science, [and] there was the ability to actually make measurements about your treatments,” he says. “In our area, things get bigger or smaller — you can actually see them [and] it’s very concrete.

“I also appreciate the emotional aspects of taking care of brain tumor patients…It’s remarkable the emotional connections you can make with people facing problems like this.”

It’s a wonderful feeling to be able to help, he says, and he cherishes those relationships. At the same time, it’s also what has made the field harder as he has grown older and, in many ways, more aware of his own mortality.

Seeing his patients — many of whom he counts as his friends — suffer and experience life-shortening illnesses gets more difficult all the time.

So, every day, he’s driven to do more and to ensure that patients feel that value. “It’s like anything, the more focused you become, the more complicated things get…the fact that we understand that complexity and can help patients navigate it, they understand that right away.”