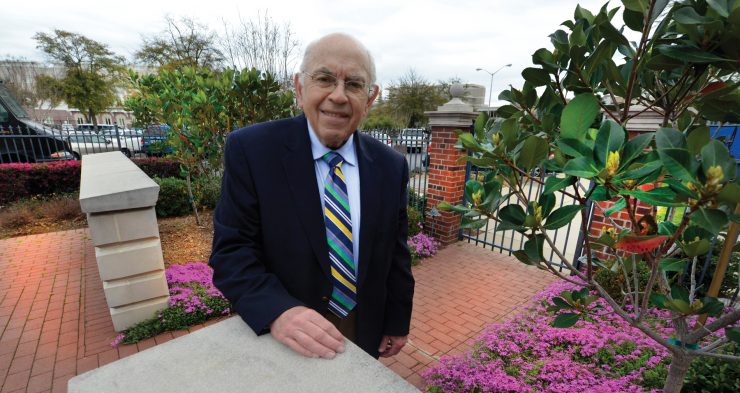 A Chair* with Way More than Four Legs

Its namesake calls them a group worthy of honor but one that would never ask for it.

Donors to the Georgia Academy of Family Physicians Joseph W. Tollison, MD Distinguished University
Chair stand 415 strong, the largest number of individuals and organizations ever to contribute to a single endowed chair at MCG.

“It is hard to explain the level of commitment that the family physicians across this state had and have in developing a sense of permanence, a sense of ongoing presence at the Medical College,” Dr. Joseph W. Tollison, former Chairman of the MCG Department of Family Medicine, says of the individual family medicine physicians and groups statewide comprising the majority of supporters.

The chair started with a grassroots gift in 1977 that would eventually total $100,000. The seed money, from the Georgia Academy of Family Physicians’ Educational Foundation, was generated from sales of educational and self-assessment materials to family physicians nationwide.

Over the years, 332 donors have made 1,854 individual donations – 61 gave $1,000 or more – to fully endow the chair at $1.1 million in 1997. Last year, the chair was redesignated a Distinguished University Chair as donations, along with strategic investments by the MCG Foundation increased its value to $2 million. The chair perpetually supports the Department of Family Medicine and is held by the person who chairs the Department of Family Medicine.

“This has been an amazing rallying of individuals and groups all pulling together to strengthen family medicine in our state and at our state’s medical school,” says Dr. James B. Osborne Sr., President and CEO of the MCG Foundation. “Support has come quite literally from all four corners of Georgia, from cities large and small. This chair is living proof of the impact that can be made by gifts large and small on the mission and purpose of the state’s public medical school.”

Donors include 149 MCG alumni and 32 faculty members. Many of the same names surface as those involved in the early days of establishing a statewide family medicine clerkship: names such as Drs. Larry Boss, Lanny Copeland, Ollie McGahee, and Ohlen Wilson . . . names such as Camille Day, Executive Vice President of the Georgia Academy of Family Physicians, and the late Pat Eubanks, whose daughter, Robin Eubanks, has taken over her mother’s responsibilities as Executive Director of the GAFP Educational Foundation . . . names such as Dr. H. Gordon Davis Jr. (’45), a longtime MCG supporter in practice in Sylvester, Georgia, whose leadership roles included serving as Chairman of the Board of the MCG Foundation and President of the MCG Alumni Association . . . names such as Dr. Paul Forney, Vice Chairman of the MCG Department of Family Medicine.

Forney, who holds the Ollie O. McGahee, MD Chair, joined the faculty in 1982 after fulfilling a military obligation at Fort Gordon in Augusta. Forney completed medical school and residency training at the University of Maryland School of Medicine, but as a longtime volunteer teacher at MCG, then a faculty member for 30-plus years, he has adopted MCG as his medical school as well. Forney, who has remained up to his elbows in education throughout his tenure, including serving as Director of the Residency Program for several decades, was President of the Georgia Academy of Family Physicians at roughly the same time the Tollison Chair was being established. The experience helped him understand the broad, deep commitment to family medicine and rural care across the state. His involvement with the physicians volunteering their time and talent to the statewide family medicine clerkship left zero doubt. Like so many other family physicians, he started and kept giving.

“It became a way for all family physicians to give to the future of academic family medicine,” says Forney, one of many who contribute regularly to the fund. An endowment also helps ensure perpetuity and continuity. The fact that Tollison was so popular at home and across the state helped seal the support, Forney says.

“Some of this giving was sacrificial; all of it was benevolent,” says Tollison, who joined the faculty in 1976 and became Chairman in 1982. He had advocated for the chair but was stunned by being selected as its namesake. While he had little say in the selection of the chair’s first holder, he is very happy with that decision as well. Among a then-small sea of bright, talented faculty, Hobbs was heir apparent as Chairman, Tollison says. “Dr. Hobbs has a long history of being a difference maker,” Tollison once wrote.

Hobbs and Tollison are vastly different individuals. Tollison remembers Hobbs sticking his head in his office on voting days to remind his Chairman that he’d just canceled out his vote. But there is also much common ground. Both are firstborns. Both have enjoyed great love stories, although Tollison lost his wife, Betty, 20 years ago after a battle with cancer. Tollison was also President of the Association of Departments of Family Medicine, as Hobbs will be next year. Both have been honored by the Society of Teachers of Family Medicine; in fact, Hobbs accepted Tollison’s award for him in 1995 when Betty’s illness precluded travel. They both have great affection and passion for family medicine, MCG, and each other.

“I am old-school,” says Tollison. “Words are wonderful, but show me. He showed me over and over again.”

*The Curtis G. Hames, M.D. Distinguished Chair also is based in the MCG Department of Family Medicine.