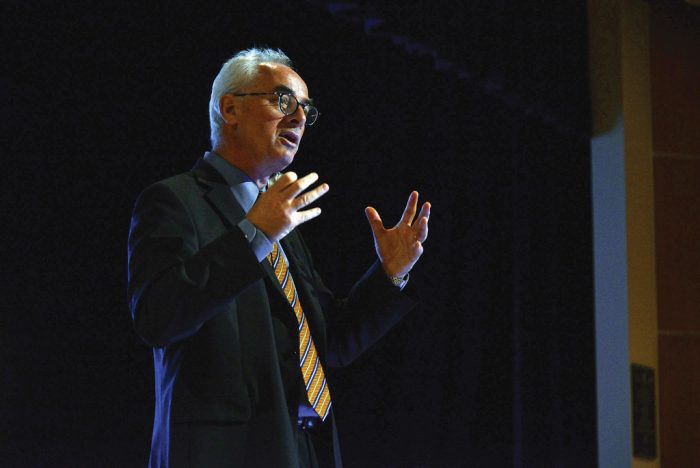 Over our years together, we have talked often and proudly of leadership at our medical school, of those who are here and of our alumni across this nation and beyond who see and feel what is needed and then take that next brave step of action. Think if you would of Dr. Walter G. Rice. He was a pathologist, the first medical director of Augusta’s Shepeard Blood Center, who joined our faculty in 1955, was named interim dean of our medical school in 1959 and then dean one year later. Dr. Rice was a native of Nigeria and knew apartheid only too well. And when he became our dean, he became a brave advocate for righting a long-abiding wrong: He wanted Georgia’s public medical school to admit black students.

Perhaps the only individuals more noteworthy in this important and long-overdue action at MCG were our very first black students, Drs. John T. Harper Sr. and Frank Rumph who came to our medical school in 1967.

We noted the April 2 passing of Dr. Harper in our spring letter to you. But to summarize this quietly brave individual again, he was a high school valedictorian who loved working on his family’s farm. He was drafted into the United States Air Force while doing general surgery training at Emory University and served our country as a flight surgeon. He returned to Emory to complete training as an orthopaedic and hand surgeon and would practice for many years in the Atlanta area before retiring in 2008.

Our Dr. Rumph is a native of Fort Valley, Georgia, a top undergraduate of Fort Valley State University who went to graduate school at Atlanta University. He would become a pathologist and public health advocate who would serve as director of the Georgia Public Health Laboratories and district health director of the East Central Georgia Health District, which includes Augusta.

As he recently shared with us, Dr. Rumph also is a man who would grow to forgive his medical school for injustices to him and to his quiet classmate Dr. Harper. In fact, this physician – who promised never to cross our path again as he crossed the graduation stage – would return to us as a part-time faculty member when he returned to Augusta as the city’s first black district health director in 1991.

It’s frankly tough to hear some of what he said about those days. There were race-based jokes and jabs, even from some faculty. But Dr. Rumph, a self-professed militant in that day, would not sit still for injustice. Rather, he stood and asked why. And, he would ensure that Dr. Rice, who would become a good friend to him, was aware of major concerns. At one point, following a particularly overwrought encounter with one of his professors, Dr. Rumph decided to simply go elsewhere to finish his medical education. Dr. Rice wisely told him that he had succeeded in his first two years, had proven both his fortitude and ability and that the next two clinical-based years would no doubt be better ones.

Dr. Rumph went home that summer, sought additional counsel and decided he would stay and continue to succeed at our medical school.

He certainly did so here and well beyond. In fact, he would soon agree to be part of the recruitment committee that would ensure the ground that he and Dr. Harper broke at MCG remained open.

Georgia’s public medical school was really the only place Dr. Rumph seriously considered because he was a pragmatist as well. His ancestry was all from Georgia, and he reasoned that Georgia’s public medical school was a logical place for him. And, of course, he knew of MCG, of relatives whose physicians were its graduates. Even his high school girlfriend babysat for two MCG alumni. As he traveled the world later, he would hear more about his alma mater and about what great physicians we educate, and he would be proud.

But he didn’t realize that his application meant he would be one of the first black students here. When he was accepted, Dr. Rice invited him to come visit again and shared a clear picture of what it might mean to be first. To this day, Dr. Rumph notes the dean’s genuineness and the encouragement that it provided him. We understand that the dean had a similar visit with Dr. Harper.

But there were other amazing and supportive individuals. Students such as his classmates Drs. Bennie Sharpton, Gerald Silverboard, Thomas Anderson and Judy Orosz. He remembers exceptional faculty like chemistry professor Dr. John Hall; long-serving Dr. Russell Moores, now Professor of Medicine Emeritus in hematology/oncology, who would invite students to his home for lectures; and Dr. Charlie Wray, a 1959 graduate of our medical school, who like so many, has devoted his entire professional career to his alma mater. Interestingly Dr. Wray would become Dr. Rumph’s physician for a short time the summer after his freshman year when Dr. Rumph had abdominal pain severe enough to land him in the hospital.

Turns out that our Dr. Wray was also a member of the medical school’s admissions committee that voted to admit Drs. Rumph and Harper. Dr. Rice had also talked with him and other members of this important committee and made it clear that it was past time for Georgia’s public medical school to open its doors to all qualified citizens. Dr. Wray, whose parents had raised him as we hope we are raising our own children, was respectful to all. He doesn’t remember struggling with this decision and characteristically laughs when he says he doesn’t think he has ever done anything “monumental.” With respect, we disagree with Dr. Wray at least on that point. But what he would see is that Drs. Rumph and Harper were ready to be medical students, and he felt good about the committee’s decision.

In the coming weeks, we will share with you details of a planned celebration of the 50th anniversary of the desegregation of our medical school that will begin during Black History Month 2017. This important recognition, led by our 1974 graduate Dr. Joseph Hobbs, will seek to rightly encompass all of our alumni, our students, our community, future students and more. We so wish that Dr. Harper could be with us – and believe that he will be in a sense – as we pause to recognize those brave enough to see what needed to be done and to do it.

We hope you already know that your medical school today is an amazingly supportive place for students, where all have the opportunity to thrive. And, we are happy to also share that each year, our class of now 230 students continues to be ever more qualified and reflective of our state and nation.

On a very personal note, let me also share with you again what a great privilege it has been for me to be a part of your amazing medical school for almost 17 years. As you may know by now, I will be leaving in January to take the position of Dean and Executive Vice President for Medical Affairs at Virginia Commonwealth University in Richmond. Please also know that, like so many of you,

I will always have MCG in my heart. It is truly a remarkable place with an amazing legacy and dynamic future. Thank you for permitting me to be a part of its life and yours.

My best to you always,