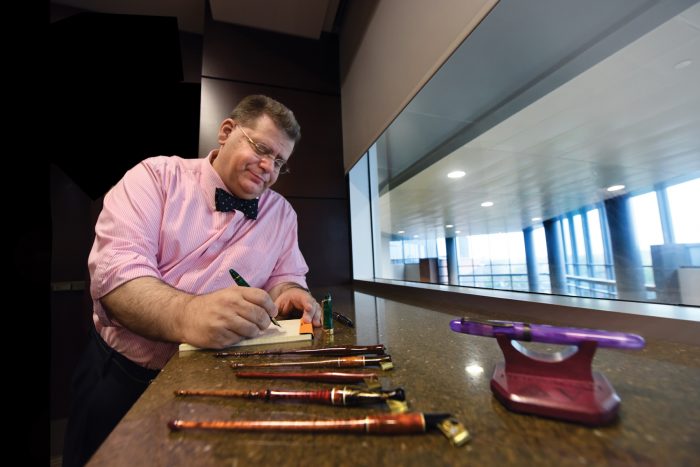 Doctors aren’t typically known for their penmanship. In fact, the handwriting of doctors is a well-used punchline. The stereotype makes it doubly surprising that Dr. Joseph Vitolo, holding both DMD and PhD degrees, is a foremost expert on penmanship and calligraphy. He refers to himself not as an expert, but as a highly informed “penman.” Vitolo is the newly appointed associate dean of academic affairs at The Dental College of Georgia.

Penmanship was not Vitolo’s first unique hobby. As a teenager, he was artistic and adventurous in pursuing new experiences, but not particularly athletic. He was inspired by a movie prop to take up competitive archery and aspired to be an Olympian, even winning a New Jersey state title.

As a student in Catholic schools in Hoboken, New Jersey, his handwriting earned him more punishment than praise. A fascination with Biblical documents and handwritten letters led him to experiment with an inexpensive calligraphy pen. But his passion was ignited a decade later while studying for his PhD in biochemistry at the University of Rochester when he saw a beautifully handwritten name plate inscribed by a colleague. Sensing a kindred spirit, the person encouraged him to attend a meeting of the International Association of Master Penmen, Engrossers and Teachers of Handwriting (IAMPETH), an organization started in the late 1940s.

“Once I attended that first conference, I knew I’d found a new passion!” says Vitolo. “I applied scientific methodology to the study of an artistic expression.”

Vitolo pursued several years of intense study and writing, a time he laughingly describes as an “obsessive-compulsive passion.” Soon, he gained a reputation as an expert in the field of Copperplate-style penmanship, also known as Engrosser’s or Engraver’s script. This particular style of script type is not considered handwriting, but rather an art form involving the drawing of letters. It is described by experts as “engraving on paper” and is an American twist on the old English Roundhand, the beautiful style of writing used to create the Declaration of Independence and the Constitution of the United States.

As Vitolo’s goal is to teach and preserve the art form, he wrote a 90-page, interactive, electronic book that is a compilation of his years of research and study. To date, nearly 20,000 beginners and advanced students have downloaded the free book.

“I never intended to profit from my work, but with this many downloads, I wish I’d charged a couple of dollars per copy!” Vitolo chuckles. “I feel that I’ve accomplished what I set out to do: to teach and preserve the history of penmanship from the Golden Age of Ornamental Penmanship in the U.S.”

Today, Vitolo is promoting the use of cursive handwriting. If Common Core education standards eliminate teaching cursive in elementary schools, he says, our society runs the risk of losing the ability to read and write cursive writing.

“Writing in cursive contributes to neuromuscular development,” Vitolo says. “Not only does it enhance eye-hand coordination and develop fine motor skills, but it takes us back to our earliest roots of communication.”

The next time you write or receive a handwritten note, remember that it represents more than just words on the page, but is preserving a historic art form. And Google “Joe Vitolo” to see just how accomplished our resident penman and script specialist truly is.