Dr. Michael Ridlehoover has boundless pride in his alma mater’s internationally renowned reputation. Thanks to him, he and his fellow alumni can now demonstrate that pride everywhere they go.

Ridlehoover, who graduated from DCG in May, met with Dean Carol A. Lefebvre a couple of years ago to pitch an idea close to his heart. “We’d just changed our name [to The Dental College of Georgia],” he says, “so I thought it would be fitting to have our own symbol and own identity.”

The symbol Ridlehoover had in mind was one that would enable DCG alumni to recognize each other at a glance, helping cement bonds with old friends and forge instant connections with new ones. “I wanted us to have a class ring,” he says.

Lefebvre loved the idea and immediately set it in motion, forming a committee to draft a design. She had previously also formed a committee to create a seal for the newly renamed college, and Ridlehoover was appointed to sit on both.

Ridlehoover, an Augusta native, drew on several sources of expertise as he served on the committees. For instance, he’s always been an avid woodworker. “I was self-taught, basically through trial and error,” he says. “I like the challenge of imagining something, then making it become a reality.”

He’s had professional experience with design as well. “I’ve done some graphic design in the past,” he says.

In designing both the seal and the ring, he drafted several ideas. Then he and his fellow committee members passed the concepts along to students, seeing what they liked and incorporating their feedback and ideas. 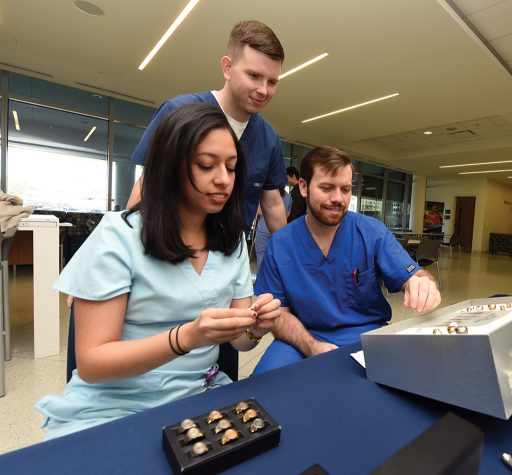 First to be unveiled was the seal, with components including a torch representing education and research; the pediment of the Old Medical College representing the heritage of the university’s Health Sciences Campus; 32 leaves representing the number of teeth in permanent dentition; eight sundial markings representing DCG’s eight residency programs; a serpent as a variation of the symbol of Aesculapius, the Greco-Roman god of healing; and the founding year of 1969.

Committee members and the rest of the DCG community were thrilled with the result, which debuted this spring.

“I think it’s so fitting that students took the reins on this project,” says Lefebvre. “They’re the ones who will benefit throughout the rest of their careers as they share with the world a tangible symbol of their profound pride in their alma mater. And because of their efforts, every future graduate will benefit as well.”

Associate Dean Carole Hanes concurs. “We’ve never had that kind of a symbol before. The students are very enthusiastic about it and were very involved in creating it. It’s a focal point that will hopefully stay with us forever.”

Says Ridlehoover, who began an Advanced Education in General Dentistry residency with the Air Force in St. Louis upon graduation, “This is a way of instilling traditions. Not only students, but alumni as well can purchase the ring. I want to be able to see someone I don’t know at, say, a dental meeting in Seattle, and by glancing at the ring know he graduated from the DCG. I hope the tradition will become so entrenched that every student will buy one.”

Lefebvre and her faculty take great pride that as the college, now 48 years old, continues to evolve, its symbols and traditions are growing as well. “Traditions and rituals play a large role in establishing a sense of community, a sense of family, and we love knowing we’re helping to create a rich reservoir of memories,” she says.

The new class ring joins other traditions and rituals that bring the DCG family together and create community and continuity throughout the college’s history. We showcase a few of them on these pages.

Family Day
This is a university-wide fall event, “but we put our own spin on it,” Carole Hanes says. Events for family members of first-year students include tours, presentations and hands-on experiences in the dental simulation lab. “This takes place during our new students’ first semester, so the visit enables family members to visualize their child in our dental environment,” Hanes says.

Impressions Program
The DCG chapter of the Student National Dental Association hosts this event for prospective students interested in a dental career. Select high school students and college undergraduates spend a Saturday participating in mock interviews, tours and hands-on simulation. “It’s a nice opportunity for people who think they might be interested in dentistry to see what it’s really like,” Carole Hanes says. “It’s a huge help to them and also presents a great recruiting opportunity for us. We’re always on the lookout for the best and brightest.”

White Coat Ceremony
This summer ceremony for rising second-year students celebrates their role as patient-care providers with the provision of their first white coat. “It’s a symbol of their entrance into the profession,” says Hanes. “Families attend and share in the milestone, and the students recite and sign a copy of a dental pledge that they write themselves. Then, they’ll repeat this pledge at graduation three years later. This ceremony is all about professionalism and ethical behavior.”

Hooding Ceremony
This event, honoring graduating seniors, generally takes place on the same day as the university-wide commencement ceremony. “It’s a welcome-to-the-profession ceremony and really, really special,” Carole Hanes says. During the ceremony, the students are led in by a faculty member they have chosen to receive the Judson C. Hickey Award, named in honor of the DCG founding dean. The award honors the faculty member senior students deem has been the most influential during their education.

Talent Show
Members of the DCG community bring their inner hams to the stage in the winter to display their skills in areas including music, dance and comedy. “It’s a great time for our students, faculty and staff,” Hanes says. “We’ve had guitarists, pianists, singers, stand-up comedians – just a remarkable demonstration of the immense talent within our community. It’s such a fun evening.”