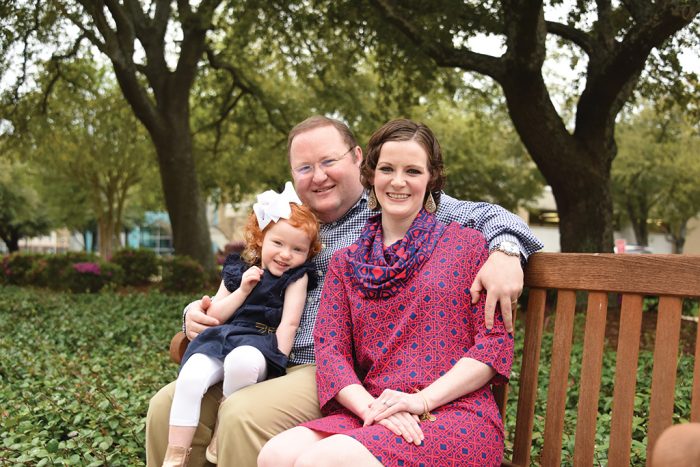 Travis Garnto and his wife, Susan, had just celebrated the first birthday of their adorable daughter, Laney, in 2015 when another milestone grimly presented itself: Susan was diagnosed with breast cancer.

The timing couldn’t have been worse. Garnto, a native of Wrightsville, Georgia, had recently left his job in environmental engineering to pursue a dental career. “I grew up loving science, and I’ve always been a tinkerer,” says Garnto. “My wife was a dental hygienist, and she thought dentistry would be a natural fit.”

Considerable sacrifices would be necessary, but the couple was committed to making it work. Garnto enrolled in The Dental College of Georgia, a commitment that proved to be just as tough as he’d been warned it would be. “The classes are not only extremely difficult, but hands-on,” he says. “The curriculum comes at you like a waterfall. You’re just trying to get up to the top without being washed away.”

And only a year into dental education, his wife’s cancer battle began. Not only was Garnto in the thick of his studies, but he was researching lights for polymerizing composites with his mentor, Dr. Frederick Rueggeberg. His plate couldn’t have been fuller.

As daunting as it was for Garnto to support his wife while caring for a baby and completing his degree, he credits the DCG community for easing his plight considerably. “They’ve all pitched in and helped us in so many ways,” says Garnto. “The faculty, my classmates, the staff – I’m just more thankful than I can say. They’re like family.”

Garnto’s burden was eased in another way as well. He has amassed several scholarships in dental school, and in his senior year, he was named the recipient of yet another: the Dr. Hudson J. Powell Sr. Memorial Scholarship. The scholarship fund was established in 2014 to memorialize a 1978 DCG alumnus who died of cancer after practicing dentistry in Statesboro, Georgia, for 35 years.

Says Garnto, who graduated in May with Distinction in Research, “The scholarship financially allowed me to complete my degree during my wife’s treatment. It was such a relief to have less of a financial burden than I would have otherwise.”

Garnto now practices in south Georgia at the Dental Center of Vidalia, and Susan is cancer-free. Their lives, he says, couldn’t be better. “Nothing beats doing what you love for a living,” he says. “And I’m the first member of my family to go to college, so I hope I’m serving as an inspiration for my daughter, nieces and nephews.”