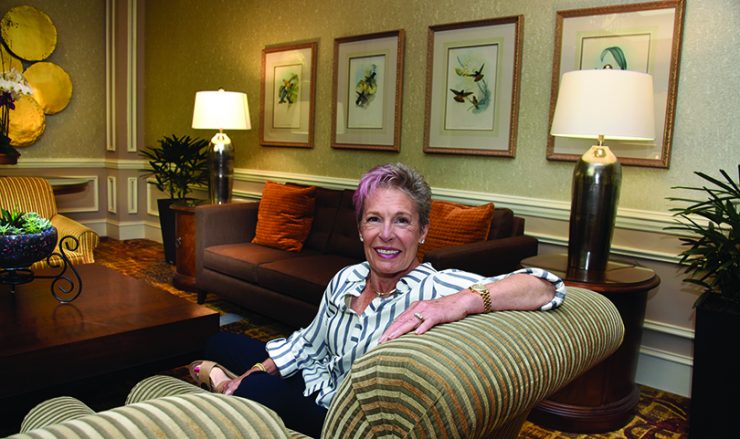 She’d already achieved a mountain of accomplishments. An associate nursing degree had prompted her to earn an associate dental hygiene degree. It was as she was nearing completion of the latter milestone that she knew she wanted to take her ambitions a step further. She wanted a dental degree.

But her the lack of a bachelor’s degree was generally a deal-breaker when applying to dental school.

Yet, The Dental College of Georgia opened its doors to her. “They accepted me on the condition that I do really, really well on some tough prerequisites the summer before enrollment,” says Moran.

“It was very intense, but I was determined. I had to ace those courses, and I did.”

Moran threw herself into dental school, piling massive amounts of study into her weekdays so she could spend weekends at home in Atlanta with her husband. That determination served her well.

She earned her dental degree in 1975, then completed a periodontics residency at Emory University.

Next, she and her husband, a businessman, chose their dream location — sunny Naples, Florida —
and visited the city in preparation for the move.

“I figured I could find somebody who needed an associate, but there was only one periodontist in Naples, and he’d just taken on an associate,” says Moran. “I got back to the hotel kind of discouraged. When I told my husband, he said, ‘Well, sugar, I know what we are going to do now: He sounds like the best competition a girl could ever have!’ He urged me to call several dentists in

Naples to tell them I was coming, and they were all encouraging. The rest is history.”

Adds Moran, “I ended up having a fabulous career.”

And she never forgot how it started.

Moran spent years repaying her student loans, and when she was done, she figured she wouldn’t miss the loan money from her paycheck — so she donated that amount monthly to the DCG. A Jeannie H. Moran Scholarship has been awarded annually ever since.

Her donations have only increased since then, including sponsoring a clinic in the DCG building that was subsequently named in her honor.

Moran retired in 2010 but volunteers regularly at the nonprofit Neighborhood Health Clinic, Inc., in Naples. Her husband died in 2001, but she remarried and enjoys a full life of golfing, boating and volunteerism. “I’ve been fortunate to find the love of my life twice,” she says. “I thank God every day.”

And her gratitude toward DCG will never falter. Says Moran, who recently helped celebrate her alma mater’s 50th anniversary with a visit to Augusta during Alumni Weekend, “They took a chance on me, and I’ll be forever grateful.”

To set up a scholarship fund in your name, or to otherwise contribute to the DCG’s mission, contact: