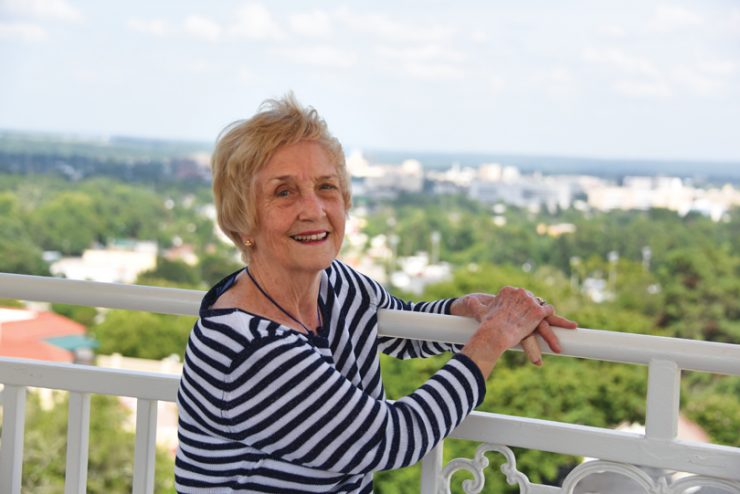 Alumni and Philanthropy News: The Non-Traditionalist

For students entering medicine as a second career, Dr. Carol Meyer is giving them a leg up.

It was a different time, to say the least.

Dr. Carol Meyer (’67) had plans to become a physician. As a young child, the Florida native wanted to be a nurse, until her mother told her, “Why not a doctor?” But her fiancé, who also planned to enter the medical field, said, “If anyone’s going to go to medical school, it’s going to be me.”

“I should have had a hint there,” Meyer said with a wry laugh. “I got him through medical school and decided it would be my turn, and he decided he wanted a divorce.”

Meyer, who was living in Savannah at the time during her soon-to-be ex’s internship, hasn’t looked back since. After her separation, the one-time laboratory technician in a Miami sewage treatment plant enrolled at the Medical College of Georgia in 1963, six years after she received her undergraduate degree in chemistry from Duke University.

She was one of only a handful of nontraditional students in her class — and one of only two female nontraditional students. (Out of a class of 100, there were a total of nine graduating females.) Meyer remembers working her way all through school doing lab work during nights and weekends on call. She established Georgia residency by working first in the clinical laboratory at then-Talmadge Hospital, and later a pediatrics research lab. “I never had a lot of money,” she said, “but going back to school was fun after working full-time for so many years.”

Meyer was already pursuing pediatrics when her interest in allergy-immunology was sparked by a personal experience: During her internship, she caught a virus from one of her pediatric patients and ended up with asthma. She eventually was double-boarded in the two specialties.

Her life took an exotic turn when she completed a second year of residency at Gorgas Hospital in the former Canal Zone, then returned there after her fellowship training to take a post as a staff physician, working as a pediatrician, allergist, immunologist and rheumatologist. She’d loved the country since her college days, when her parents took the young Meyer on a tour of Central America while they were working as educational advisors to Nicaragua on contract with the University of Florida.

She spent more than two decades there before retiring from civil service in 1989 and joining the faculty at MCG, where she spent another 11 years in allergy-immunology and pediatric rheumatology.

Now retired and living about 25 miles east of Gainesville, Florida, in the home that her parents designed and built, Meyer has fond memories of these two major episodes in her life: her time at MCG and in Panama. Recently she helped launch a museum located at the University of Florida Smathers Library chronicling the U.S. contributions to the establishment and running of the Panama Canal.

In 2008, she established the Carol F. Meyer Allergy-Immunology Fellow Fund at MCG to help provide funds for fellows to travel and present papers at meetings. This past year, she added another fund, which is still to be endowed: the Carol F. Meyer Scholarship for nontraditional students earning their medical degrees at MCG.

“I have always been very grateful to the state of Georgia for letting somebody who had been out doing other things come into the school,” said Meyer, who only applied to MCG. “And I know the struggle it is. It’s harder for people to quit or partially quit whatever they were doing before and go back to school. So I wanted other students to have the opportunity I had.”