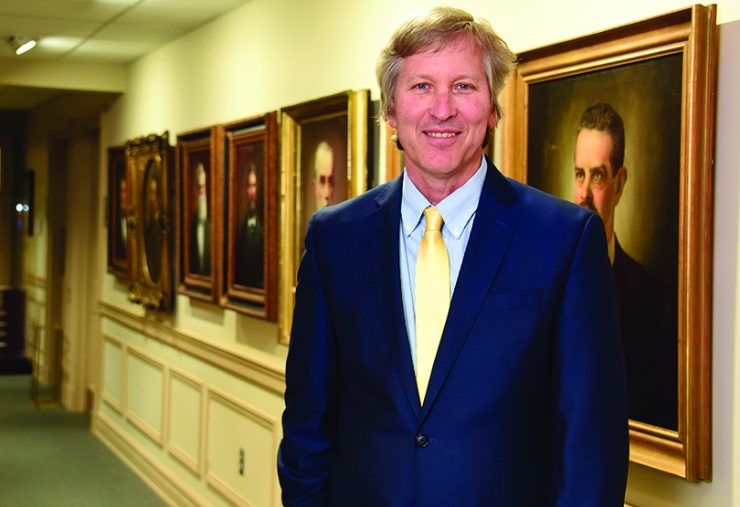 When you meet Dr. Charlie Howell, you might be tempted to take at least one step back. He is one of those guys you can always count on to say what he thinks and maybe cock his head a little if you still don’t seem to get it.

I remember when I was named chair of the Department of Neurology in 2001, he was chief of the Division of Pediatric Surgery — he was actually chief for more than 30 years — and he immediately started telling me how I needed to hire more pediatric neurologists. I calmly assured him that I would try but that there was a serious shortage (there still is, unfortunately) and he assured me it was still my job to find them and never let me forget that.

It’s a little weird now thinking back on this man whose tenure at the Medical College of Georgia makes mine look short … by almost a decade. He is a 1973 graduate of MCG who only left us for two years to do his pediatric surgery fellowship at Children’s Hospital of Philadelphia.

All these years later, he looks and speaks with an intensity that exemplifies his relentless commitment, particularly to the care of children and to his alma mater.

Back in the day, his office was on the eighth floor of the old Talmadge Wing of our adult hospital. What we then-called the Children’s Medical Center functioned as a hospital-within-a-hospital, and you could always find Dr. Howell somewhere in the comparatively crowded, but actually kinda cool and child-focused space.

He would help start there one of the first half dozen ECMO programs for babies born in deadly respiratory failure that a ventilator cannot fix (MCG Medicine, Fall 2015/Winter 2016) and would help start the Pediatric Trauma Center. He would help design a free-standing children’s hospital that opened in 1998 and design its operating rooms. He would train a lot of other great doctors, including Dr. Walt Pipkin, a 1997 MCG graduate who is now pediatric surgery chief and surgeon-in-chief at the Children’s Hospital of Georgia.

Dr. Howell would become chair of the entire Department of Surgery in 2011, and just stepped down as chair and as surgeon-in-chief of the children’s hospital in July 2018. He would advocate for bringing a Ronald McDonald House to downtown Augusta in the 1980s, and he and his wife, Debra Hall Howell, along with Braye and Tori Boardman, co-chaired the fundraising campaign for the new house, which opened just steps away from the children’s hospital in 2015.

Because at some point, this ardent proponent of children and MCG became a pretty great fundraiser in his spare time. It helps when you really believe in what you are raising money for, and Dr. Howell really believes.

Now he has yet another new day job. Just this October he agreed to serve as CEO of our physicians’ practice group, now called Augusta University Medical Associates, a job he has held at least once before.

In the not very distant background of the last busy many months, Dr. Howell, our pediatric department chair Dr. Valera Hudson, also an MCG graduate, and others also were working on a major expansion of our now 21-year-old children’s hospital building. The expansion includes a larger 55-bed neonatal intensive care unit as well as our first-ever dedicated pediatric cardiac critical care unit, instead of putting these children in the pediatric intensive care unit; and a significant expansion of our pediatric oncology program to include a pediatric bone marrow transplant unit.

Need is driving both what we want to expand and add for children in our state. Of course so is Dr. Howell, and now Dr. Hudson.

I say all this to also say don’t be surprised if you find Dr. Howell at your front door soon looking for support for the Children’s Hospital of Georgia and the Medical College of Georgia.

When you do, I hope you will take one step back, but only to get a better look at a man who epitomizes the heart and soul of your medical school.