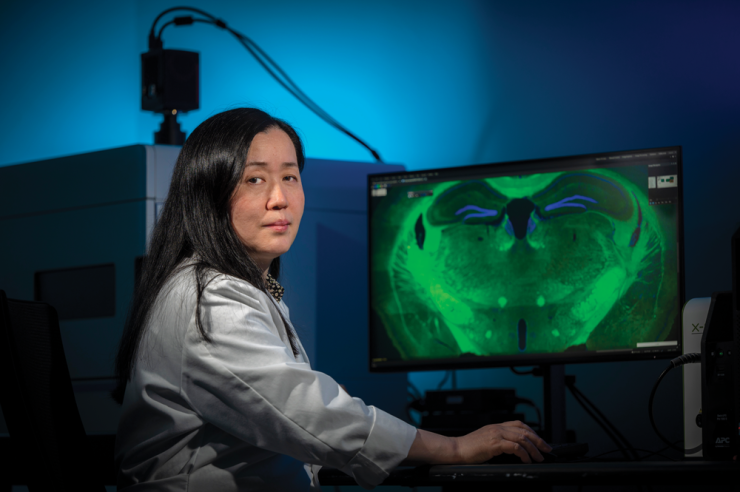 A little-studied enzyme has been found in high levels in healthy neurons, levels that scientists say decline with age and more dramatically with Alzheimer’s, making adjusting the enzyme’s level a potential treatment for both.

The enzyme is called HDAC9, a member of a class of enzymes involved in how tightly our DNA is wrapped, which affects our gene expression. But a scientific team led by Dr. Xin-Yun Lu has early evidence that HDAC9 also is critical to neurons communicating with each other and to our ability to learn and remember.

Eleven HDACs are known to be present in the brain, and Lu, chair of the Department of Neuroscience and Regenerative Medicine at the Medical College of Georgia, has found HDAC9 is the most highly expressed among them, exclusively expressed in neurons, and particularly abundant in the hippocampus and prefrontal cortex, both of which have a key role in learning and memory and are vulnerable in Alzheimer’s.

“We need to look at why it’s decreased, and when it’s decreased, why it causes problems,” says Lu, Georgia Research Alliance Eminent Scholar in Translational Neuroscience.

The project is funded by a new $2.8 million grant (1R01AG076235-01) from the National Institute on Aging to further explore the impact of HDAC9. It represents a collaboration between the Lu lab and that of Dr. Neal Weintraub, chief of the MCG Division of Cardiology, associate director of MCG’s Vascular Biology Center and GRA Kupperman Eminent Scholar in Cardiovascular Medicine.

“Aging is the major risk factor for Alzheimer’s disease, so when you look at what genes are involved in brain aging and Alzheimer’s, you look at gene expression at different ages,” Lu says.

As they have looked periodically across the comparatively short life of a mouse, an average of about two years, they have been able to document the steady decline of HDAC9 in the brain with normal aging.

Lu’s lab also has found significantly decreased HDAC9 expression in the prefrontal cortex of patients with Alzheimer’s compared to those without it.

In a humanized mouse model of Alzheimer’s, the most common cause of dementia, they’ve found that HDAC9 expression is decreased before the iconic amyloid deposits are evident.

They also have evidence that removal of HDAC9 body-wide, or specifically in an area of the hippocampus of mice, impairs communication between neurons, a phenomenon called synaptic plasticity, as well as learning and memory.

HDAC, or histone deacetylase, levels overall are associated with normal brain aging as well as neurodegenerative diseases like Alzheimer’s. While they are still early in their exploration of its role in the brain, Lu’s lab has evidence HDAC9 specifically may regulate expression of the gene(s) important to that synaptic plasticity and so how well neurons communicate.

The new grant is enabling them to look more closely at whether loss of HDAC9 in the hippocampus and prefrontal cortex mediates both age-related cognitive decline and the typically more dramatic cognitive decline and physical changes to the brain that occur in Alzheimer’s. That includes looking downstream of HDAC9 to better understand how it is regulating synaptic plasticity.

They are looking at several established players in healthy synaptic plasticity that HDAC9 may be regulating, already associated with Alzheimer’s.

“We need to find what neural substances mediate HDAC9’s effect on behavior and synaptic plasticity,” Lu says. They are looking at substances like the proteins neuronal pentraxin2; nerve growth factor inducible, another protein; and brain derived neurotrophic factor, yet another protein known to aid the survival of neurons.

It’s important to know how HDAC9 works, but if future therapies involve increasing its expression, you also have to know if its downstream partners are present, Lu notes. So when they increase HDAC9 expression, they are looking at what happens to the levels of these factors. Lu notes they have identified about 380 factors in toto that may be at play.

A synapse is where two neurons connect by passing a chemical messenger, called a neurotransmitter, between them. Synaptic plasticity is basically the capability of neurons to communicate based on the demands placed on them as we think and act, communication that also is essential to making memories out of what we experience.

Human brain tissue for the studies was obtained from the Emory Alzheimer’s Disease Research Center and the Arizona Alzheimer’s Consortium.

A strong family history also is a risk factor for Alzheimer’s, according to the Alzheimer’s Association, as well as medical problems like a significant head injury and heart disease.